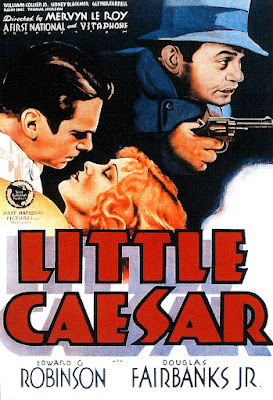 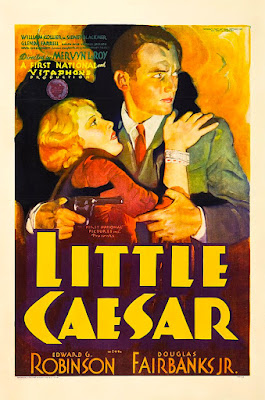 An acknowledged cinema classic, in 2000 Little Caesar was finally inaugurated into the National Film Registry of the Library of Congress for being "culturally, historically, or aesthetically significant" and recommended for preservation (alongside such other feature films as Sweet Sweetback's Baadasssss Song [1971], A Clockwork Orange [1971 / trailer], Buena Vista Social Club [1999 / trailer], Shrek [2001 / trailer] and The Dark Knight (2008 / trailer]). But even that honor and the fact that the movie is on untold "Best Of" lists cannot undo the fact that the movie is dated in appearance and style, something that renders too many film unpalatable to so many people. Not us, though. 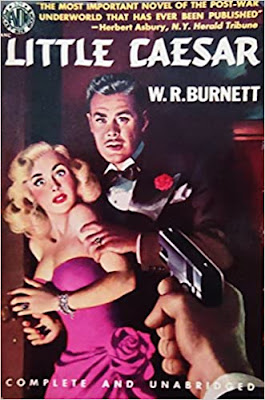 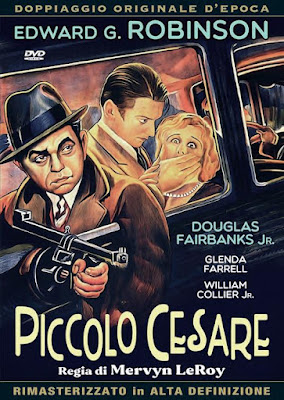 But it is in all likelihood that Francis Edward Fragoh, the co-scripter of James Whale's classic Frankenstein (1931 / trailer), added an obvious today but perhaps once subliminal detail lacking in the novel: Fragoh, who was married and had kids, is claimed by some to have been gay, made Little Caesar, otherwise known in the film as Enrico 'Rico' Bandello (Robinson of Soylent Green [1973]), a repressed if not at least unspoken homosexual obviously in love with his former pal and small-time criminal partner Joe Massara (Douglas Fairbanks Jr. [9 Dec 1909 – 7 May 2000]). In turn, if one assumes the relationship was in any way sexual off-screen, Joe is perhaps one of cinema's earliest bisexuals,* as he basically rejects his own criminal past as well as Rico for a woman, Olga Stassoff  (Glenda Farrell [30 Jun 1904 – 1 May 1971] of Mystery of the Wax Museum [1933 / trailer]). Thus Little Caesar is very much a milestone of early queer cinema.
* On the other hand, perhaps he simply prefers the closet and a marriage of convenience and, like Fragoh, the joys of the lifestyle you were supposed to have those days. Wouldn't be the first: back when we were exploring options in D.C. at the tender jailbait age when we still needed a fake I.D. to get to such places, we were surprised how many fathers of classmates we ran into. (Andy, Peter, Pat — we be talkin' to you.) 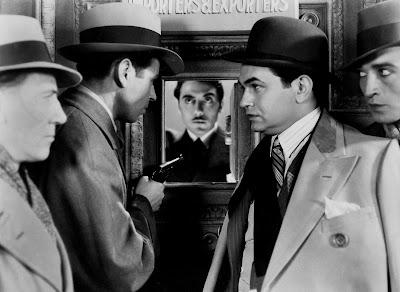 As mentioned, the filmic technique of the movie is a bit dated and a far cry from today's thousand cuts a minute and continually in-action camera. The opening gas station robbery,* shot from the distance and basically in one unmoving longshot, already reveals the old fashioned, at times stodgy directorial style of the movie. But LeRoy, unlike so many of his contemporaries at the time, at least normally has a good concept of balance, depth of field and use of shadow, so even when his film occasionally moves into stageyness, it usually remains visually appealing. The guy was not above the occasional odd visual as well, which is definitely eye-appealing.
* Had the movie been made after the introduction of the Hayes Codes in 1934, this scene, in which the unseen gas station attendant is obviously shot (probably dead), would have dictated that both Rico and Joe would have to be "punished" by the film's end. In that sense, Little Caesar retains a sliver of reality in that not everyone pays for the crimes they may have committed. 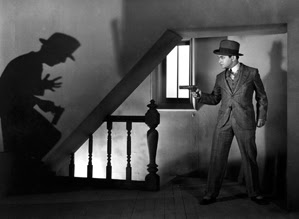 The next scene, of Rico and Joe both eating and establishing an alibi at a diner, quickly reveals the respective characters of the movie's key players: the rougher, tougher and violent Rico, who dreams of "being somebody", and the younger, softer pretty-boy Joe, who dreams of dames and becoming a dancer. Moving to Chicago, the two hoods pursue and achieve their dreams quicker than in a Horatio Alger book: Joe couples up with Olga to become a successful nightclub dancing duo, and Rico climbs the gangland ladder ever higher and higher. But while Joe would like to leave the life of crime behind him, Rico is not prepared to let his former partner leave crime, or him... 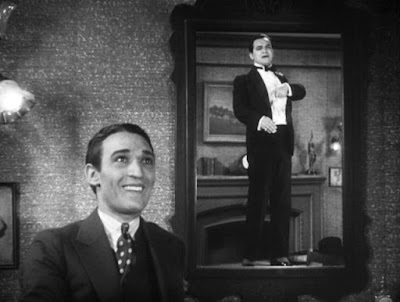 Much is made of Edward G. Robinson's acting in this movie, and when watching the movie the fuss is easy to understand. As Rico, he delivers a powerhouse performance that outshines (if not simply overpowers) everyone onscreen without ever coming across as overly forced or overbearing.* It is an interesting foil to the performance of Douglas Fairbanks Jr., who is surprisingly weak and unmemorable as Joe — but then that is exactly what Joe is as a person: he may be good-looking, but he's pretty much a follower who is first at the beck and call of the mighty Rico, and then very obviously abdicates wearing the pants to the more decisive and proactive Olga. In both relationships, there is no doubt about who's pegging who.
* Interesting is how the look and style of his characterization, which by now has become such a stereotype that it is almost camp when quoted or imitated, retains a freshness in the original. 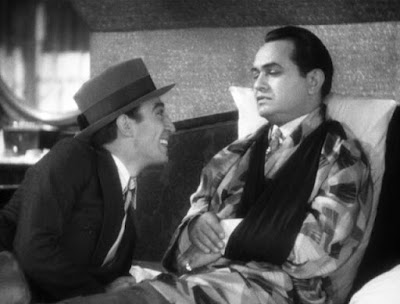 Not that all the acting or characterization in the movie is so great. The cops are a pretty uninteresting folk, of the type that sit around in the office reading newspapers unless called or that magically show up now and then just to remind Rico his days are numbered, like some chorus of a Greek tragedy. The main policeman, Sgt. Flaherty (character actor Thomas E. Jackson [4 Jul 1886 – 7 Sept 1967] of Doctor X [1932 / Trailer from Hell], the sorely unknown proto-body counter Terror Aboard (1933 / full film), the film version of The Lady in the Morgue [1938 / full film], It Conquered the World [1956, with Dick Miller] and so much more), has a weird accent and doesn't exactly display much gravitas in what is basically a one-note performance, remaining memorable only because of all the cops he is the man in charge and is always at the forefront. For much of the movie, Flaherty remains less a force of action than inaction, biding his time looking constipated. He knows that Rico is going to fall as quickly as he has risen, all he has to do is wait — which he does.

And indeed Rico falls: by the end of the Little Caesar, his inability to kill his heartthrob Joe leads the former high-living teetotaler to an inglorious alcohol-soaked ending at the hands of a machine-gun toting Flaherty. (Remember, size matters: real men have big guns.) The representative of the law goes all personal at the end, taking a machine gun to do some machine-gun overkill in the final scene, which ends with Robinson's truly effective, and believable, presentation of one of filmdom's most famous final lines, "Mother of Mercy! Is this the end of Rico?" A scene that wonderfully and ironically underscores the different trajectories of Joe and Rico by transpiring in front and in back of a huge billboard advertisement of Joe & Olga's latest dance engagement.*
* As wonderfully ironic and trenchant as the ending of Little Caesar is, no gangster-film ending yet has ever quiet matched the brutal hardness of the unexpected final scene of The Public Enemy and its accompanying "Thump". That is an unforgettable  ending. 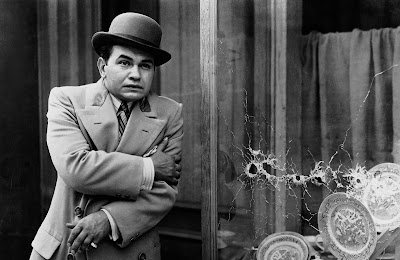 Whatever age-related "flaws" Little Caesar might have, the movie remains a compact and riveting experience that foregoes any excess flab or flash, though more than one scene does owe a nod to the German expressionist films of the previous decade, if only due to the stage design, use of shadow or camera placement. The movie is a bit more than just visually static at times, with the interior scenes often displaying a somewhat stage-like appearance, but there are occasional flashes of visual brilliance, like the shooting death on church steps that has been visually cited in untold other movies. A certain dry humor also infuses more than one scene, perhaps most strongly at Rico's big party where his minions present him with a diamond-studded pocket watch they supposedly "bought" as a present. And for anyone who doubts that the "subliminal" queerness of the movie might be unintentional, we would draw attention to the scene of Rico lying on his bed with his obsequious underling Otero (George E. Stone [18 May 1903 – 26 May 1967] of The Vampire Bat [1933]) staring at him with starry-eyed adoration, a scene that infers — despite the clothed status of both men — either post- or pre-bonking bliss. Otero remains faithful till the end, finally undone by Rico's inability to do away with his first (and far more handsome) object of desire, Joe. 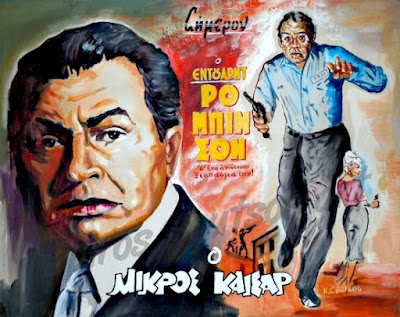 Contemporary viewers, particularly those whose cinematic diet is by preference mainstream Hollywood, will find Little Caesar difficult. It is old and creaky, and technically rather primitive. But other folks, those who can look past the age of the product to the finer points that shine beneath, will find Little Caesar an extremely watchable and enjoyable movie whose teeth might be long and loose but still retain a bite. You know who you are, so make your decision accordingly. 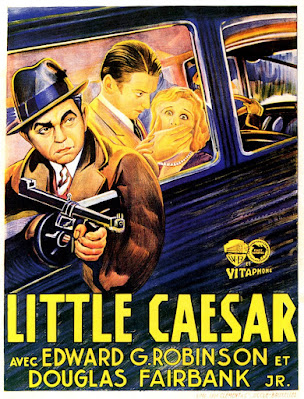 We, in any event, would watch the movie again; something we can't exactly say about a lot of other films we talk good about.
Posted by Abraham at 8:21:00 AM