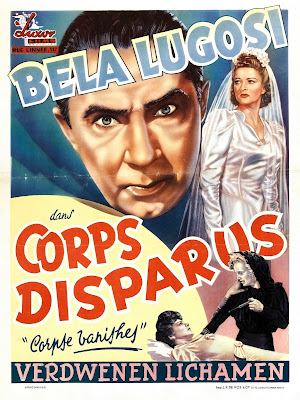 "Why do you beat my son so hard?"
Fagah (Minerva Urecal)
"Because he's at best an animal, and some day I shall have to destroy him."
Dr. Lorenz (Bela Lugosi)
"My poor son!... Why was he ever born?"
Fagah 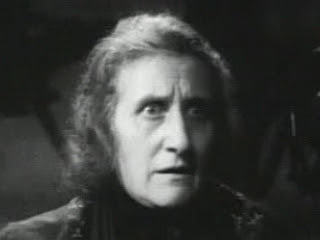 In retrospect, by 1942, eleven years after his career-defining role in Tod Browning's rather static Dracula (1931 / trailer), it had long become pretty clear that Bela Lugosi (20 Oct 1882 – 16 Aug 1956) would never be an A-lining star. True, in 1939, eight years after Dracula  (and seven after White Zombie [1932 / trailer] and Island of Lost Souls [1932]), he was billed fourth in what was perhaps his most "respectable" English-language project, the Greta Garbo vehicle Ninotchka (1939 / trailer), but by three years later he was once again neck deep in his normal, rent-paying fare: B-films and second-feature filler like this movie here. 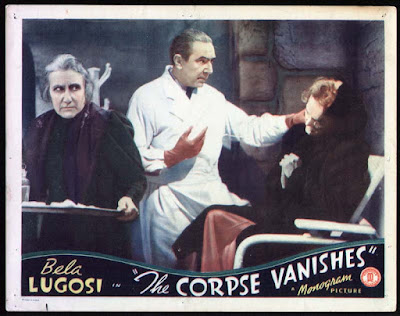 Trailer to
The Corpse Vanishes:
The Corpse Vanishes, the second movie Lugosi was to make with everyone's favorite vertically-challenged genre film character actor Angelo Rossitto (see Scared to Death [1947]), is the third — possibly fourth, as sources vary — in a series of nine films Lugosi made for Poverty Row's Monogram Pictures, produced by the legendary Sam Katzman (7 July 1901 – 4 Aug 1973; producer of The Giant Claw [1957], amongst many films), that have become infamous as the "Monogram Nine".*
* "Between 1941 and 1944, Bela Lugosi starred in a series of low-budget films released by Monogram Pictures. To many viewers at the time and during the decades that followed, the 'Monogram Nine' were overacted and underproduced, illogical and incoherent. But their increasing age has recast such condemnations into appropriate praise: in the 21st century, they seem so different not only from modern cinema, but also from Classical Hollywood, enough so as to make the aforementioned deficits into advantages. The entries in the Monogram Nine are bizarre and strange, populated by crazy, larger-than-life characters who exist in wacky, alternative worlds. In nine films, the improbable chases the impossible. [Rhodes & Guffey]" 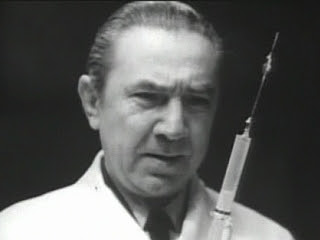 The Corpse Vanishes is perhaps the pinnacle of everything that makes the Monogram Nine so infamous. Cheaply made, poorly directed and illogically scripted, it literally screams "No Budget Production" and shines as an explanation for why its Oklahoma-born director, Wallace Fox (9 Mar 1895 – 30 June 1958), who directed 84 films between 1927 and 1953, has been so utterly forgotten: the man had absolutely no noticeable directorial talent. (It might sound like a joke, but one of his best films is probably the sixth and last Inner Sanctum Mystery, terrifyingly entitled The Pillow of Death [1945 / trailer].) 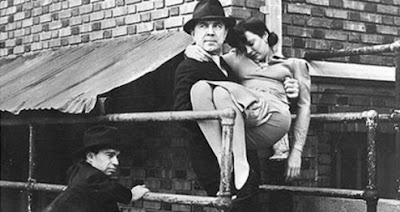 But to simply dismiss The Corpse Vanishes as a threadbare Lugosi vehicle that pulls out a cheap version of every cliché ever found in any other Lugosi film and barely manages to string them together to make a less-than-coherent and extremely ridiculous plot actually does the movie great disfavor. For one, no matter how bad a Lugosi film might be — see, for example, Bela Lugosi Meets A Brooklyn Gorilla (1952) — the basic fact is that age has made all of his films enjoyable in one way or another, if not simply as a notable and generally enjoyable bad-movie experience. (Admittedly, with some films, sometimes the memory of the viewing becomes fonder with age. Re.: Bela Lugosi Meets A Brooklyn Gorilla.) And for another, well, The Corpse Vanishes is truly a surreal experience, a film not even as bad as it is simply and thoroughly ridiculously incoherent and non-sequiturial in narrative, reasoning and dialogue. As scripted by Hawaii-born Harvey Gates (19 Jan 1889 – 4 Nov 1948), from an idea/story definitely not thought through by an apparently drug-addled Sam Robins (21 Oct 1910 – 2 Sept 1995) & Garald Schnitzer (27 Mar 1917 – 2016), there is nothing about The Corpse Vanishes that indicates anybody possibly took the project seriously as a horror film, Poverty Row or not.
"I've been up all night with dead people."
Patricia Hunter (Luana Walters) 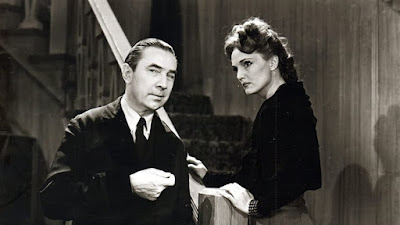 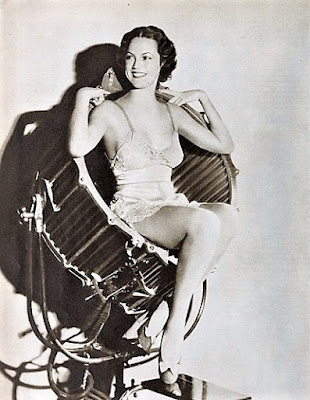 ** "By 1942, Luana Walters's career had all but dissipated and the abrupt death of her actor/husband Max Hoffman Jr. in 1945 at age 42 proved too much for her. She subsequently turned to drink and despair. [...] Other than a few obscure parts here and there in the 50s [her last roles were background filler in the anti-classics The She-Creature (1956 / trailer) and Girls in Prison (1956 / trailer)], she was little seen although she remained in the Los Angeles area for the remainder of her life. On May 19, 1963, at the age of 50, she became another tragic, barely-reported Hollywood statistic when she died from the effects of her alcoholism. [imdb]" Trivia: Walters was the first actress to portray Superman's biological mother, Lara, on screen, in Superman Comes to Earth, the first chapter of the 1948 Superman movie serial starring Kirk Alyn (8 Oct 1910 – 14 Mar 1999) as Superman. Of greater interest, perhaps, is her starring role as Elinor Gordon in the unfortunately lost 1934 exploiter The Third Sex, aka Children of Loneliness and The Un-natural Sin, a film of historical importance in LGBTQ film studies once advertised as "The 'Queerest' Picture Ever Made". Plot: "Elinor Gordon, who was frightened sexually by a man while an infant, confides in her psychoanalyst (Wayne Lamont) that she is contemplating yielding to the advances of her overly attentive and affectionate female roommate, Bobby Allen (Jean Carmen). The psychoanalyst advises the woman to dispossess her roommate, who works in the same law office as she, and to marry a football player. After the young woman rebuffs her roommate, she accompanies her lawyer employer, Dave Warren (Allan Jarvis), to the country home of the firm's senior partner, John Grant (John Elliott). While Elinor falls in love with Dave, the senior partner's socialite daughter, Judy (Sheila Loren), yearns for Paul (Morgan Wallace), an artist, who, unknown to her, is a homosexual. [Letterboxd]" Supposedly (but doubtfully) based on Radclyffe Hall's 1928 novel The Well of Loneliness, "one of the first serious works of fiction on the subject of homosexuality". 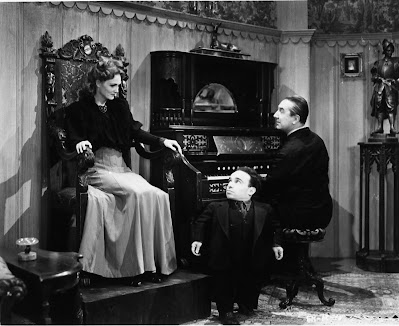 The plot description makes the movie sound far more logical than it is, assuming that the concept of a mad doctor conducting extremely high-profile crimes ("killing" and kidnapping the bodies of brides at their weddings) for his secret nefarious actions seems logical to you. And, of course, as no mad doctor is complete without his loyal henchmen, he has three: Fagah (the often uncredited but always active character actress Minerva Urecal [22 Sept 1894 – 26 Feb 1966]) and her two sons, Toby (Angelo Rossitto) and the unlucky Angel — all of whom Lorenz treats like shit (as in whips and even kills or leaves to die). And after it's seen, who can possibly ever forget the scene in which Angel follows Patricia around a gloomy dungeon while eating a huge turkey drumstick? And lest we forget, as Mad Scientists and their wives are apt to do, both Dr. and Countess Lorenz like to sleep in matching coffins.
"Why don't you try to go back to sleep? No one's going to harm you. I'm sure it was just a nightmare."
Dr. Foster (Tris Coffin)
"I think this whole place is a nightmare. Professor Lorenz and his wife were actually sleeping in coffins, I saw them!"
Patricia Hunter
"We often find it difficult to explain the peculiarities of some people."
Dr. Foster
"I guess so."
Patricia Hunter 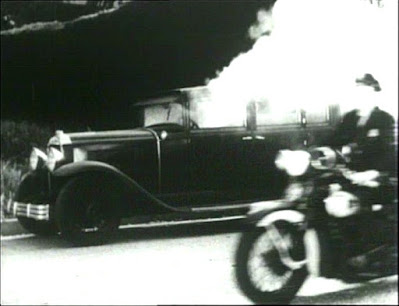 As enjoyable as the nonsensical narrative and disjointedly connected scenes are, the dialogue is truly the icing on the cake. The level of irony and humor is too high for anyone to ever think that it was even meant to be taken seriously, and often one can only wonder how everyone involved was capable of saying their lines without laughing. Indeed, the dialogue tends to make the film's comic-relief character, the photographer Sandy (Vince Barnett [4 July 1902 – 10] of Scarface [1932 / trailer], The 9th Guest [1934 / full film], Captive Wild Woman [1943 / Trailer from Hell], The Killers [1946], Crazy Mama [1975, see Dick Miller Part IV], Summer School Teachers [1975, see Dick Miller Part IV] and so much more), totally superfluous.
"Aww, now wait a minute. Are you trying to tell me that this Professor Lorenz is a hypnotist as well as a horticulturist?"
Keenan (Kenneth Harlan) 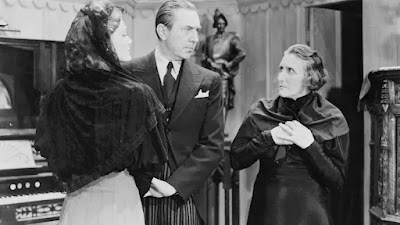 The Corpse Vanishes is one of those films so out there, so beyond everything that can be considered "wrong" when it comes to moviemaking, that it becomes almost a template of dream logic, which elevates the movie into a realm of otherworldliness that makes the movie truly enjoyable. Here at a wasted life, we give the movie a hearty recommendation. 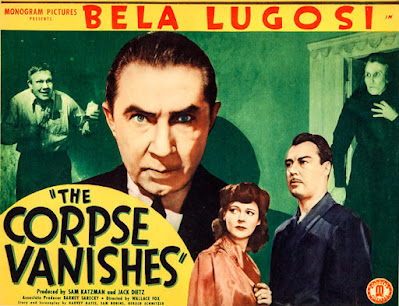