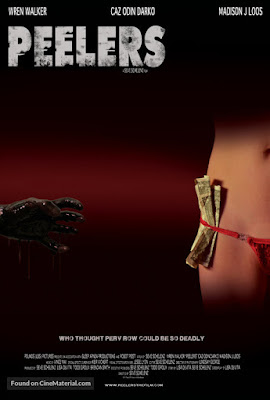 (Spoilers.) A gore-heavy zombie flick that treads some of the same grounds as Zombie Strippers (2008 / trailer) but with less "star power", less kitsch and far less panache. But for that, this Canadian indi production definitely embraces its exploitation roots and nature with greater gusto and doesn't shy away from wallowing in extremes and at times almost transgressive tastelessness to get a juggler-vein-aimed laugh. The birth scene late in the movie, with its amalgamation of gore, poignancy and ridiculousness, is perhaps the apex of the movie's transgressively funny scenes, but the credit sequence is likewise noteworthy in its total embracement of the exploitative: seldom have we seen credits proffered in a sequence that celebrates the unadulterated, uncovered beauty of hugely bulbous and immobile countertits as in the credit sequence of Peelers. (True silicone fans might be disappointed to learn, however, that the kardashian basketballs never show up anywhere in the flick itself; those in the movie appear all to be 100% natural.... Possible exception: augmented pokies?)
Trailer to
Peelers:
Despite what one might think, Peelers takes its name not from any horror-porn style peeling of skin, but from the basic idea of gals peeling off outfits while on stage. The film includes a few scenes of such, one of which cannot help but bring the video to Miley Cyrus's song BB Talk to mind until it turns all water sports, another that will definitely appeal to pokies fans, and one that appears inspired by the legendary Honeysuckle Divine (or, possibly, a specific scene in Erotic Nights of the Living Dead [1980]). None of the three performers, Baby Elaine (Nikki Wallin of Android Night Punch [2014 / full movie] and Camp Death III in 2D [2018 / trailer]) or the other ones whose name we could not figure out, ride off into the sunset — indeed, as at least one tagline used for the movie puts it, "You May Not Get The Happy Ending You Were Looking For."
Miley Cyrus's
BB Talk (2015):
Peelers plays out over the closing night of Tittyballs, a small-town strip club run — and just sold — by the tough but responsible Blue Jean (played very well by the highly attractive Wren Walker of The Curse of Willow Song [2020 / trailer]), a strong but emotionally damaged woman obviously respected by her staff, if not even unrequitedly loved by her studmuffin doorman-with-a-heart Remy (Caz Odin Darko, a low-brow actor attractive and studly enough that it makes total sense that he has acted in a couple of David DeCoteau film, namely Evil Exhumed [2016 / trailer] and Killer Bash [2014 / trailer]). A group of local coal miners show up to celebrate the discovery of oil — as if it would make them rich instead of just their boss — but there is more to the black gold than the Mexican quintet know. Before they can eat a salad or drink a second tequila, they start spewing black guck and turn into infectious, unstoppable killer zombies. 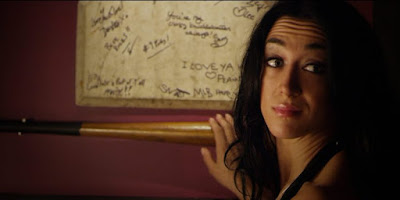 In other words, the basic plotline of an untold number of zombie movies, just this time it is bubbling crude (oil that is, black gold, Texas tea) that carries the easy-to-transfer contagion. 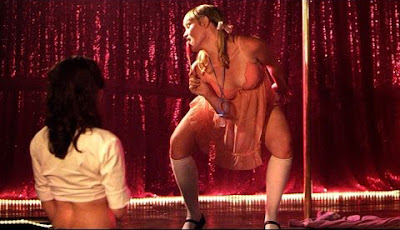 Written by Lisa DeVita, who shows up to play a cop whose head goes splat, and director Sevé Schelenz, Peelers is a relatively well-made sophomore directorial project — Skew (2011 / trailer) being his first feature-length project — with some interesting visual flourishes and a definite love of gore and fluids. Nevertheless, the movie ends up seeming a lot longer than its 1:35 min running time. The first third of the flick, which includes way too much character development, could have easily been condensed or trimmed and, in turn, the opening hospital scene seems oddly tagged on and out of place, as it doesn't seem to truly relate to the rest of the strip-club set movie. A shorter running time would have probably been an improvement, although one must also give credit that the film doesn't really show its low-budget origins at its seams. 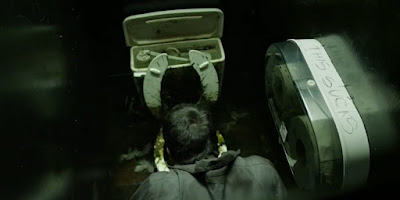 Once Peelers moves to the strip club, Schelenz suddenly whets the viewers' expectations by incorporating a relatively long (and probably technically difficult) moving camera shot in which he introduces a variety of key, secondary and tertiary characters. There is probably no other shot in the movie as seductive as this one, though he does manage some nice framing and edits and disgusting projectile puking and gruesome deaths later on. Unluckily, at least in the version we watched, many scenes are excessively dark, which makes sense seeing that they play out in a dimly lit club that later loses its electricity, but as a result the events are bit difficult to follow as they happen. And, really, who came up with the idiotic concept of having characters move and hide dead bodies for no real logical reason — other than to have an added way to have the infection spread.

The spewing fluids and gore, when seen, are impressive, while the acting spans from good (Wren Walker and the strippers) to passable (Caz Odin Darko and Cameron Dent, who plays the bartender) to fun (Jason Asuncion, of Killers in the Forrest [2012 / trailer], seen as the choleric kitchen cook) to downright unprofessional (Madison J. Loos, of The Tooth Fairy [2006 / trailer], as Logan, the poorly cast tertiary lead hero).

The one plot flaw that annoyed us is also the film's signature element: the spewing black fluids. While fun to watch and totally gross and a nice change to spewing red, the fluids projectile in such abundance that basically no one in the movie should be able to avoid simple skin contact with it, but such contact also guarantees infection. Thus, to enjoy the movie one has to accept that yes, some future fodder simply don't get promptly infected so that Peelers can have some prospective (and eventual) bodycount.

On the whole, Peelers is entertaining enough for what it is, particularly since it does have the occasional flash of brilliance (i.e., the opening credits, the birthing scene, the puking, the closing scene). In the end, however, it is above all little more than a solid (if slow-starting) zombie splatter flick with a flawed script that never really transcends its genre. As such, it is worth watching but, unless you're a fan of the genre, not really worth searching out. (If you're a fan, go for it.) 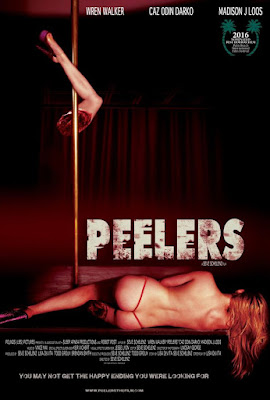