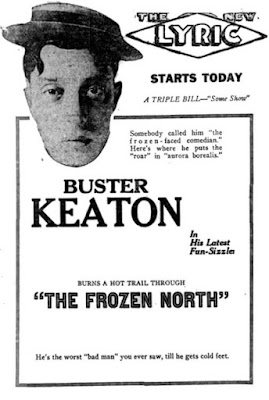 "I've made a mistake... This isn't my house or my wife."
It's only taken us twelve years to finally get around to presenting a short by one of the greatest film comedians of all time, Buster [Joseph Frank] Keaton (4 Oct 1895 – 1 Feb 1966). Astute film fans, however, may have noticed that this blog has long featured a GIF from his film Steamboat Bill Jr (1928 / film) in the upper right of our page.
The Great Stone Face, as he is also known, made numerous comic masterpieces in his life that can now easily be found online. His films from the '20s are generally considered his best, and indeed they remain visual and comic treats to this day (although one does have to occasionally look past some questionable racial and/or political attitudes). The Frozen North is one of his less-remembered projects, and is generally not considered one of his best. But then, it is perhaps also one of his meanest – his character, who in the course of the film cold-bloodedly commits murder and simply walks away, is even simply known as "The Bad Man".
The movie is a bit of cinematic trolling: angered by statements made by cowboy star William S. Hart (6 Dec 1864 – 23 Jun 1946) against Roscoe "Fatty" Arbuckle (24 Mar 1887 – 29 Jun 1933) regarding the then-current Virginia Rappe (7 Jul 1895 – 9 Sept 1921) scandal, Keaton made this Western spoof as an insult to the reputed wife-beating Western star. (Later, after he saw the film himself, Hart refused to speak to Keaton for years.)
Arbuckle, it seems, was one of Keaton's best friends, indeed, Buster's career, which began in 1917, was greatly assisted by Arbuckle: "A chance meeting with Roscoe "Fatty" Arbuckle changed his life forever. Arbuckle had been making movie shorts with Mack Sennett and was just starting at Joseph Schenck's studio. He asked Buster to do a scene with him in The Butcher Boy (1917 / film). Buster agreed and a lifelong friendship began. Buster worked with Arbuckle until 1919, when in September of that year he began making his own films. [Find a Grave]" Keaton was one of the few Hollywood stars that publically came to Arbuckle's defense both during and after the comedian's arrest, court cases and final acquittal.
"The Frozen North is [...] co-directed by frequent Keaton collaborator Edward. F. Cline (4 Nov 1891 – 22 May 1961). It is another of Keaton's venture into informal surrealism. Unfortunately, it is not an entirely successful effort, which may be due, in part, to its missing three minutes of footage. [...] The humor in Frozen North is atypical, with Keaton at his blackest, bleakest, and strangest. [366 Weird Movies]" And we here at a wasted life love it.
The music, of course, is not original, but at least it works...
The Frozen North:
Posted by Abraham at 12:16:00 PM