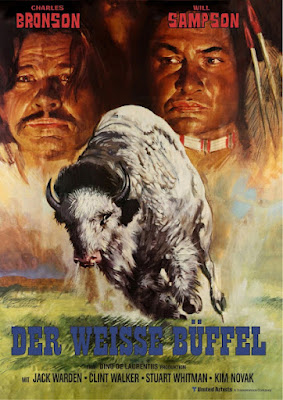 Also known as Hunt to Kill, at least when it was screened on TV in the US; it took forever for the film to be released on video/DVD, whereupon it regained its original title. Interestingly enough, although both director J. Lee Thompson (1 Aug 1914 – 30 Aug 2002) and star Charles Bronson (3 Nov 1921 – 30 Aug 2003), made numerous films after this one, including many together, The White Buffalo was the last "traditional" Western that either ever made despite a common Western-heavy history. The movie is based on a novel of the same name by screenwriter/director/author Richard Sale (17 Dec 1911 – 4 Mar 1993), who also wrote the screenplay. His most noticeable prior projects are probably the novel upon which the tacky movie The Oscar (1966 / opening scene, with studmuffin Stephan Boyd) is based, and the screenplay to the Frank Sinatra-as-a-psycho film, Suddenly (1954 / trailer). 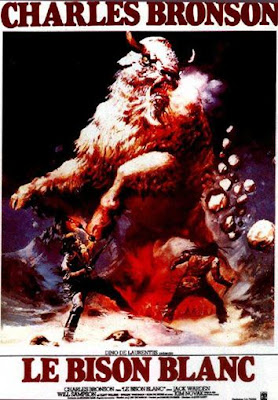 Trailer to
The White Buffalo:
The White Buffalo was the middle project of the trio of killer-animal flicks that producer by Dino De Laurentiis (8 Aug 1919 – 10 Nov 2010) made in the shadow of the success of Spielberg's Jaws (1975 / trailer), following the miserable King Kong (1976 / trailer — high point of the film: Jessica Lang's boobs) and preceding the enjoyably tacky Orca (1977 / trailer). Unlike those two films, however, The White Buffalo was not a hit and remains a kind of ignored sibling, though it has gained a bit more second-hand respect since becoming known as a fave of the Tarantino. 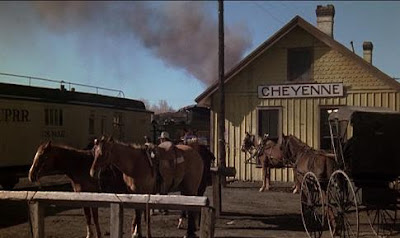 Inexplicably, despite how terrible the Oscar-winning animatronics of King Kong were, producer De Laurentiis rehired the man responsible, Carlo Rambaldi (15 Sept 1925 – 10 Aug 2012), for this film. During his career, Rambaldi did do some truly amazing work — see Fulci's Lizard in a Woman's Skin (1971 / trailer), which features such realistic effects that the director, Fulci, almost went to jail for animal cruelty — but The White Buffalo is not necessarily Rambaldi's best work. As much as the white buffalo pants and steams, the big critter always looks stuffed; in close-ups, it looks like an angry goat; and when shown charging, it is almost impossible to overlook the tracks on the ground needed to make it move most fakefully (is that a word?) forward. 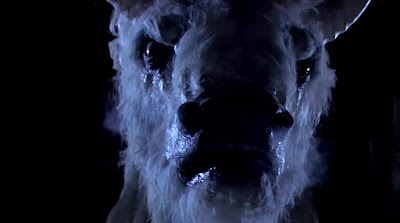 One must assume that the powers-that-be behind the film sort of realized that The White Buffalo might not be something to write home about, as it was never screened in advance for critics. Once released, it also didn't exactly reap in the bucks or garner that much praise. And, indeed, it is a deeply flawed movie, one that can hardly be described as "good". But as often the case with the ignored or less-than-perfect sibling, there's more to enjoy than one might expect. In general, it might veer more often towards the bad than the good, but there are some impressive high points and oddities about the slightly episodic fantasy horror western that makes The White Buffalo an intriguing watch. Go in expecting nothing, you might even find it enjoyable. 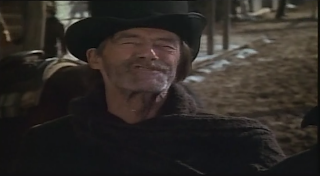 Yep, the faces rip you out of the narrative, but they generally make their appearances short and sweet and all are rather convincing, with the possible exception of Novak, who has the thankless and rather pointless role of an ex-flame of Bill's, Poker Jenny Schermerhorn. Thankless in that she really adds nothing to the story (other than possibly being an example of Wild Bill seeking closure with his past); her character, after all the build-up to her appearance, completely disappears after about five to ten minutes screen time. 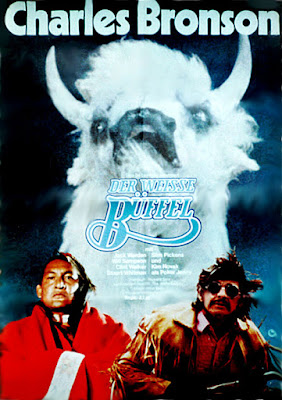 Filmed at a time when the traditional American Western was making its last gasps, the mise en scene of The White Buffalo owes more to the spaghetti western than the traditional American westerns of clean-shaven and clothed wanna-be John Waynes. And for that, it is all the stronger. True, the interior scenes often look a bit too perfect to be realistic, and some of the exterior scenes (like whenever the buffalo shows up) look way too sound stage, but for that the western towns are not spic-and-span, the heroes are flawed, the outfits are great (far beyond just Wild Bill's sunglasses, which were given an obvious callback in Tarantino's entertaining if over-rated Once Upon a Time in the West there Was Django Unchained [2012 / trailer]), and some of the exterior scenes are breathtakingly beautiful. Indeed, the shootout where Wild Bill and a reluctant Charlie Zane assist Crazy Horse by joining his shootout against some enemy Injuns is set amidst a wonderfully landscape that once again testifies to the epic expanse that was once the wild west. (To what extent we tend to like to destroy nature, often pointlessly, is obliquely inferred by the mountains of bison bones piled up outside of Cheyenne.) 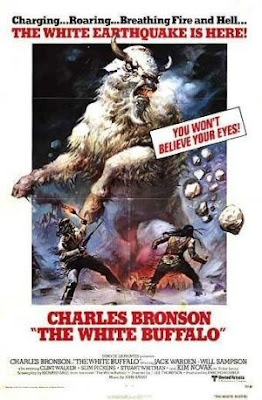 The White Buffalo, narratively, is an odd fish. Director J. Lee Thompson (the man behind the original Cape Fear [1962 / trailer] and the slasher oddity Happy Birthday to Me [1981 / trailer]) was prone to describe the flick as "Moby Dick of the west", a reference that might apply to Crazy Horse, who is hunting the titular beast both to revenge its killing of his daughter and to ensure that her soul can rest, and thus has a personal score to settle, but the reference is less applicable to Wild Bill. That legendary hero is introduced on a train going west, where he awakens guns a-blazing from a nightmare — a premonition, we learn later — of the white beast a-charging. We soon learn in a voiceover from a less-than-tertiary character, the train conductor Amos Bixby (an unrecognizable Douglas Fowley [30 May 1911 – 21 May 1998] of Cat-Women of the Moon [1953 / trailer], Flaxy Martin [1949] and Scared to Death [1947]), that Wild Bill has "a strange bee in his bonnet, a deadly dream that was eating out his soul. A nightmare that he had to hunt down and face up to before it turned him into a raving maniac." The why of his nightmares is never explained, they just are, and he is basically a-traveling in pursuit of something he is unsure is even real. He tries to hide his identity by calling himself "James Otis", a move that proves highly ineffectual, and thus the first half of the film is filled mostly with a number of almost generic western scenes, including two barroom shootouts and a lightly tweaked stagecoach ride. It is only after Wild Bill meets his old pal Charlie Zane and learns that the White Buffalo truly does exist that the movie really become about the hunt for the beast and, likewise, begin to obliquely tango with its nominal theme of ingrained racism. (Basically: Crazy Horse hates white people, Wild Bill hates "red n*****s", but the respect each gains for the other after they join forces makes them see beyond their hate.) 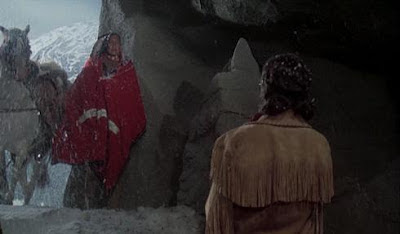 Perhaps the biggest flaw in the movie, aside from Wild Bill's questionable motivation of chasing a nightmare and all the laughable scenes involving the white buffalo (some of which are used more than once at different points in the movie), is that narrative of The White Buffalo, like this review, meanders all over the place. Way too much time is spent on the journey, with the final showdown with the buffalo coming across almost as a poorly staged afterthought. Most of the diversions along the path of the narrative might be interesting in their own way, but they also end up giving the movie a sense of disjointedness and lack of direction. And while the towns and costumes look good, whenever the white buffalo comes a-charging or is a-seen or the action moves to an obvious soundstage-set exterior, the movie suddenly looks oddly cheap and fly-by-night. 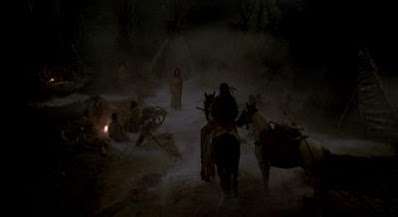 And the overall end result? A failure, perhaps, but an interesting one. Interesting enough that despite all its flaws, The White Buffalo remains a watchable film worth searching out. Watch it with the kids. 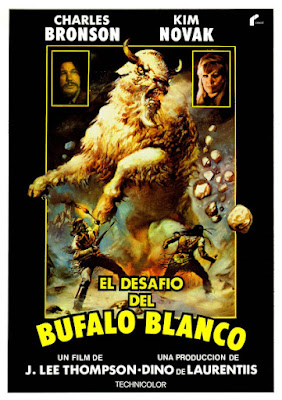