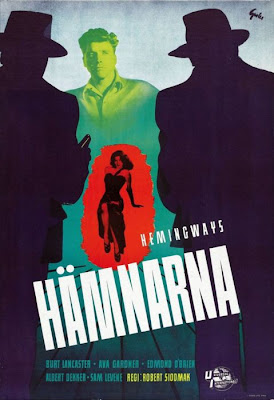 After leaving Nazi Germany for Hollywood in 1939, German émigré director Richard Siodmak made a number of interesting films ranging from above-passable horror (Son of Dracula [1943 / trailer], the third of Universal's Dracula franchise) to wonderfully campy (The Cobra Woman [1943 / trailer]) to Technicolor adventure fluff (The Crimson Pirate [1953 / trailer]), but it is for his film noir movies that he is best remembered and most honored. His first US crime drama was Fly-by-Night (1942), a relatively forgotten if entertaining programmer, but beginning with Phantom Lady (1944 / trailer), he had a productive decade during which he not only helped give film noir the style and form that defines it but also produced a number of treasured and highly praised classics. The Killers, the debut film of a young and undeniably charismatic Burt Lancaster and the second headlining (and name-making) credit of the beautiful Ava Gardner, is one such film – in 2008, in fact, it was even deemed "culturally, historically, or aesthetically significant" and worthy of preservation in the United States National Film Registry by the Library of Congress (where it joins such noteworthy [???] films as, among others, Abbott and Costello Meet Frankenstein [1948 / trailer], Back to the Future [1985 / trailer], Boyz n the Hood [1991 / trailer] and Will Success Spoil Rock Hunter? [1957 / trailer]). 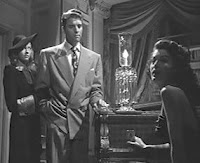 The Killers is based in part on a short story of the same name by Ernest Hemingway first published in 1927 in Scribner's Magazine, and was eventually remade in 1964 by Don Siegel (the director of The Verdict [1946], amongst other films). Siegel's color version, which was originally made for TV but released theatrically after being deemed to violent, is far more flashy, crass, violent and nasty than Siodmak's version, and thus arguably the more enjoyable film of the two; Siodmak's version, however, is without the doubt the more beautiful. Siodmak's opening is also far more faithful to the original tale; the rest of both films – 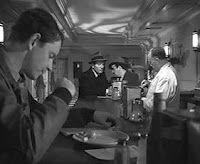 so to say, the search of the "Why?" – is the invention of the filmmakers and not present in Hemingway's short story. The "why" is the explanation for the inactivity of the Swede (Lancaster), who sits patiently and defeated in his room although forewarned that two hitmen are on their way to kill him, and then lets them shoot him dead without even lifting a finger to defend himself. In the Siodmak film, it is the insurance investigator Jim Riordan (Edmond O'Brien) who, for some not-well-conveyed reason, becomes driven to find out what would lead a man to let himself be killed like that.
At the risk of offending many, we really have to say that the original version of The Killers may be a fine film, but it also has a bigger reputation than it really deserves. It is a good film, yes, maybe even a great one, but there are better film noirs driven by crazed babes out there – off the top of the hat we promptly think of Gun Crazy (1950 / robbery scene) or Out of the Past (1947), or even the bargain-basement-budgeted Detour (1945 / full fabulous film). 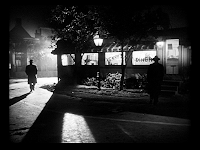 The cinematography, for example, is perfectly functional, but with the exception of the first ten minutes its visual verve and use of the shades of B&W or depth and shadow or stark contrast or disquieting angles and framing never reaches the same memorable levels as, say, Phantom Lady or the unjustly unknown noir I Wake Up Screaming (1942 / trailer) or even Kansas City Confidential (1952 / full film). (That said, the continuous crane shot used for the robbery is breathtaking, even if the voiceover doesn't correspond 100% to how the cop grabs his injury before he falls.) In regard to the core casting, both Ava Gardner and Burt Lancaster are total fuckables and literally drip charisma and allure and well convey both the besotted man and the conniving femme fatale,

but Edmond O'Brien, who literally has most of the film on his shoulders, never truly conveys the hardness of a tough-guy investigator nor does one ever really understand why he is so obstinate about staying on the case. (For that, however, it is interesting to see a young and relatively slim Edmond O'Brien for a change – indeed, we here at A Wasted Life never even knew that he had ever even been slim; by the time the original and great D.O.A. [1950 / full film] came around, he was already had what you might call an easy-chair figure.) 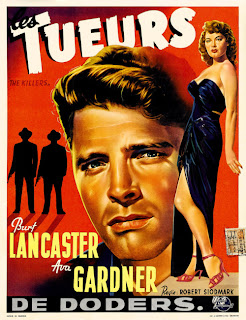 The supporting cast is just as well cast as the three leads and the acting equally as good, but the makeup is sometimes laughable (the old-age makeup of Vince Barnett [as Charleston, the Swede's jail mate and pal] is laughably atrocious) and the script is a bit of a mess. That a film based upon the past leading up to a man's taciturn acceptance of death might not be able to get around flashback after flashback after flashback is clear, but the deathbed flashbacks of the delirious Blinky (Jeff Corey) are nevertheless an obvious and ridiculously desperate attempt to keep the story rolling no matter what. Even embedded between the hardboiled dialog of those commenting about his eminent demise, the scene still instigates a snort or two.
But perhaps the true measuring stick that should be used for The Killers is that despite such flaws, the film remains enthralling and enjoyable, and keeps the viewer involved up until the its ending, one that is as bleakly just as the Swede's death is initially mysterious. 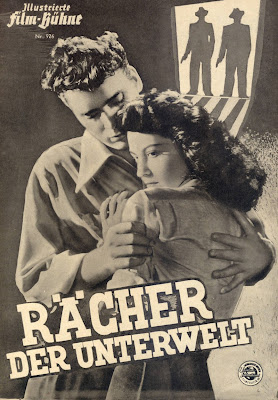 You forgot to mention the music score by Miklos Rosza is the most famous as well as greatest of any noir movie by a LONG chalk and greatly adds to the killers being generally considered among the top dozen or so noirs. Rossa basically invented the noir sound in scoring wrote the music for most of the noir biggies and almost all composers copied his style. I do want to thank you for your VERY well researched and most interesting articles. Some may think the killers doesn't rank in top twenty but they have to admit it remains among the top dozen most FAMOUS noir films.