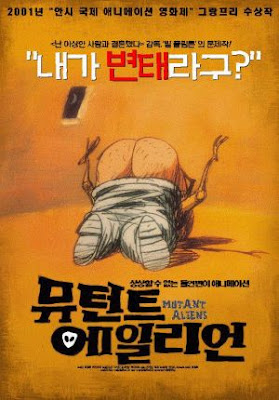 Now here's one for the kids! And you'll enjoy it, too. Of course, maybe the kids shouldn't be too young, as otherwise you might be forced to offers some sudden sex-ed lessons, not to mention deal with a few weeks of nightmares dealing with man-killing aliens and dismembered flying body parts, among other things. Bill Plympton has long been a favorite of fans of obscure and bizarre animation. We first noticed him years ago in the late 80s when MTV still had [some] balls and was worth watching on occasion; his shorts would occasionally pop up between the rotating music videos – and they were usually a well-appreciated respite from the limited and repetitive playlist programming. In 1992, he finally went the full monty and produced his first full-length animation film, The Tune (1992 / trailer), and since then he has regularly dumped one weirdly wonderful full-length film upon the public after another – most of which few people we know have ever seen. Their loss – and yours, too, if you haven't seen any of them yet.

Mutant Aliens, it should be noted, is hardly as sweet as The Tune. In fact, Mutant Aliens is often downright mean, despite its almost pleasantly Impressionistic drawing style and the overall accessibility of its visual appearance. The trailer above reveals the basic premise of the film: Astronaut Earl Jenson is left to die in space when an engineered "accident" leaves him marooned without the fuel to get back. Twenty years later, however, he returns to earth bent on revenging himself against Dr Frubar (George Casden), the man who basically left him to die. With the help of his now-adult daughter Josie (Francine Lobis), her sex-stupid boyfriend Darby (Matthew Brown), and a yitload of mutant aliens, Jenson begins to cut a swath across the countryside. 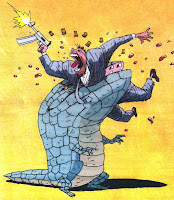 The film is heavy with sex and violence, and takes both consumerism and commercialism to task without ever questioning the moral validity of the actions of the film's main protagonists: basically, everyone who gets cut down in the friendly fire of the Earl Jenson's quest for revenge deserves it simply because, well, to paraphrase a statement we once read in a White Supremacist booklet we found at our high school (Mission Bay High) in San Diego, "If you aren't with him, then you're against him." But what the fuck, it is fun and funny to watch everyone die – as it is to watch Josie and Darby bonk in a car or at a computer input counter, Earl bonk a nose with breasts, alien noses wage war with flying eyes and fingers, body parts fly and Jesus drag race... 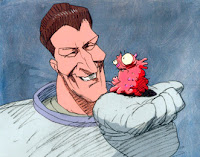 Mutant Aliens is hardly an overtly intelligent film or in any way intellectual, but it is childish and puerile and quick-moving and tasteless and well drawn and surreally funny and colorful and sublimely outrageous. All in all, it is a lot more fun than the average Disney animation film of the last ten years although, in truth, hardly as scatological or excessive or taboo-breaking as the average Drawn Together episode. Still, Mutant Alien's rude and silly and enjoyable enough to fill the air with laughter and the make the time fly – give the film a chance; you'll probably like it. We sure did.
Posted by Abraham at 11:26:00 AM