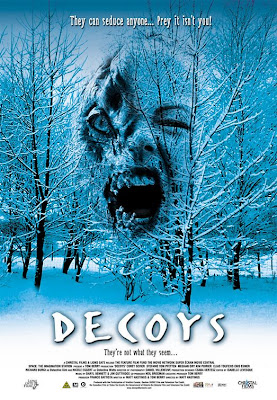 "With you it's all about cameras, conspiracies and ass-kicking aliens from hooter planet."
Roger (Elias Toufexis)

Decoys is a true rarity: a Canadian film actually set in Canada. We didn't know they still made them after Cronenberg left for Hollywood.
Dr. Gore gets it right with his nutshell description of this entertaining piece of fluff: "Hot alien blondes seduce morons." OK, he fails to mention that they kill the morons as well, which in theory should make them evil aliens, but be what it may, we couldn't help but think that the aliens were doing the world a favor. Had they not been blondes, we probably would have hated this film for not letting them get away with it in the end...

Written by Tom Berry (the director of the non-classic Amityville Curse [1990 / trailer], the fifth of an inexplicably undying series of bad films) and Matt Hastings, the latter who also directed, Decoys is more entertaining than it is good, and more fun and funny than horrific or scary. In fact, other than for the opening, in which a less-than-bright dude walks into a room of frozen dead, the film isn't scary at all – though it does have, between all the funny stuff, a few truly ick-scenes, the best being the birth of baby aliens out of the mouth of one of the longer-lasting dudes.

There are many a film out there with far less effective CGI effects than found in Decoys, but then, there are also tons of films out there with better acting – the fact that a minor character, a female cop and (in an unexplored subplot of the film) ex-lover of the hero dude Luke (at-the-time still mildly twinky heart throb Corey Sevier of Metamorphosis [2007 / trailer] and House of Fears [2007 / trailer]), played by ex-Baywatch babe Nicole Eggert (also found in The Haunting of Morella [1990 / trailer]), is the most convincingly played part of the movie reveals the general thespian level found in Decoys. (On the other hand, Eggert may only appear to be the best actress because she also has the least lines – her entire part was probably shot in a day.) But then, this is a sci-fi horror comedy, so great acting is not to be expected... 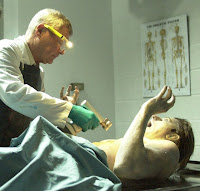 Within the basic setup of blonde space babes coming to earth to bonk morons to death in an attempt to give birth and regenerate their dying race, Decoys is much more entertaining, consistent and funny on purpose than the last alien impregnation film we had the displeasure of watching (1997's remake of Breeders [trailer]). Decoys also features a far more likable basic constellation of characters: the previously mentioned lead hero Luke, his virginal roommate Roger (Elias Toufexis, the second best actor of the film, of the Z-films Kraken: Tentacles of the Deep [2006 / trailer] and  Ba'al [2008 / trailer]), and their one-of-the-guys gal friend Alex (Meghan Ory of  Dark House [2009 / trailer], who's such a HOT STUFF brunette that her acting talent is immaterial). The three are freshmen students at St. John's College, where Luke, in a case of what seems initially to be fortuitous Peeping Tomism, finds out that the "hot" blondes Lilly (Stefanie von Pfetten of the infamously horrendous

flick Superbabies: Baby Geniuses 2 [2004 / trailer] and Icarus [2010 / trailer]) and Constance (Kim Poirier of American Psycho II: All American Girl [2002 / trailer] and Dawn of the Dead [2004 / trailer]) are aliens. Of course, no one believes him – but then, he does tend to have hallucinations (i.e., a speaking corpse and a face that opens up like those of the Reapers of Blade II [2002 / trailer]). When morons start showing up frozen to death, Luke becomes the prime suspect – can he save his friends, his own neck and reveal the fuck-happy alien invaders to the world?

People long out of college might find the film's college party and sorority milieu as mildly stupid, but then, if you were an alien who wants to blend in while looking for horny morons with their brains in their dick, could you really find a better place than a university? For a film that revolves around sex, there is remarkably little nudity – in total, there is only one semi-nude scene, the topless Peeping Tom scene in which you see Constance's oddly synthetic breasts just before she and Lilly spout tentacles for the first time (they seem to have lumpy silicon in the Belt of Orion). And oddly enough, the aliens, for being smart enough to get all the way to earth, seem almost stereotypically blonde and vapid;

one could assume that they are so on purpose so as not to scare away the prey – everyone knows how female brains scare the male sex and negatively affect their ability to arise to the occasion – but they are even vapidly stupid when alone amongst themselves, which gives rise to the argument that they are so naturally. The predictable shock ending can be seen a mile away, but at least it fits. God only knows why the film got an R rating, though.

That said, the various small flaws found in Decoys are hardly detrimental to the overall fun of this mildly entertaining cinematic frivolity. The film is not meant to be either intelligent or great, it is meant to be a fun way to pass the time; on that level, Decoys succeeds hands down. It goes very well with nachos, beer and a joint.
But, damn! Why didn't Alex (Meghan Ory) get nekkid?!? She's babe-a-licious!
Posted by Abraham at 10:59:00 AM