Here's another forgotten oddity found on the Internet Archive about which relatively little seems to be known. The person who uploaded it assumes that: "This outrageous parody of the prototype 'commercial' family was apparently made as an in-house joke by one of the largest producers of television commercials. Their clients would have never seen this gem, which parodies products as well as the people that buy them."
MPO Productions, the firm that made the film, was founded in 1947 by Larry Madison, Judd Pollack, and Paul O’Hare "as a production film company established to create high-budget public relations films for major corporations." As TV established itself, MPO did likewise in the field of TV commercials; among the fondly remembered and still recognized commercial characters to grace the TV advertisements they produced in their Manhattan production center are Little Speedy Alka Seltzer, Mr. Clean, Ajax's White Knight and Folger's Mrs. Olsen. MPO, however, sold its film studios to Screen Gems in 1974 and moved into the field of videotronics where, as MPO Videotronics, the firm is still active today. 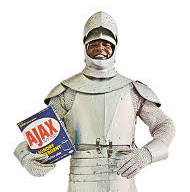 The director of The Cliché Family in Televisionland is unknown today, as are the identity of the two Cliché kids, the minority girl, the bathtub babe and, perhaps, Mrs. Cliché herself. Some sources list her as the actress Betty Garrett (23 May 1919 – 12 February 2011), of  Trail of the Screaming Forehead (2007 / trailer), but we for one don't see a true similarity between the two actresses (back then, all housewives sort of looked the same – sort like all Wal-Mart shoppers do today). What is for sure, however, is that Mr. Cliché is Roger Price, the co-creator of Droodles and Mad Libs – a simple name search under Google images verifies his identity.
The Cliché Family in Televisionland is a rather biting film at times – its swipe at the whiteness of the cliché TV family is great – and even manages to sneak in a little T&A at one point, so you might not want to watch this at work. What is remarkable is how most of the clichés presented still exist today, if only dressed in newer clothing.
The first couple of minutes of the film are a bit shaky, but after the initial flaws in the film stock, the remainder of the film is of decent quality.
Posted by Abraham at 10:50:00 AM