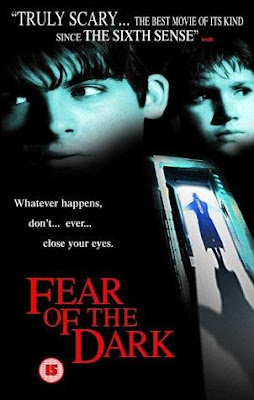 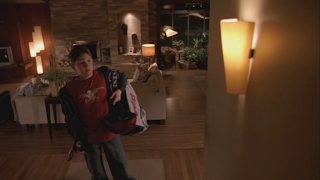 Whether or not you think this flick sucks donkey dick or not depends on what exactly you are looking for in a horror film. Supposedly Fear of the Dark has a PG-13 rating stateside, but if Fear of the Dark deserves a PG-13 rating, then the films that instigated that rating – Indiana Jones and the Temple of Doom (1984 / trailer) and Gremlins (1984 / trailer), respectively – should be rated X. Fear of the Dark is a horror film for kids – and we don't mean the child inside, we mean real, live (pre-pubescent) kids; anyone older will not find it scary at all, and might even find it total smegma. 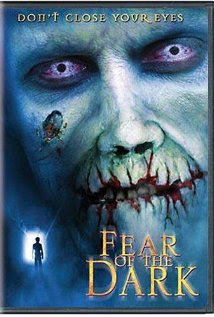 Nevertheless, Fear of the Dark is sorta based on a relatively clever idea. It assumes that there really are evil things in the dark, there really are evil things in your closet and under your bed and beneath the stairwell, but that the evil things can only get to you as long as you are afraid of them and believe that they can hurt you. Thus, for most of the film, the preteen Ryan Billings (Jesse James of The Darkroom [2006 / trailer] and The Butterfly Effect [2004 / trailer]) is the one afraid of the dark, 'cause he knows, he believes, the things – rejects from John Carpenter's retarded Ghosts of Mars [2001 / trailer] – are out to get him; only later, once the scary occurrences of the dark and stormy night that he and his older brother Dale (Kevin Zegers of Wrong Turn [2003 / trailer], The Hollow [2004 / trailer] and the excellent Transamerica [2005 / trailer]) are at home alone during a blackout, does Dale slowly realize that the evil things that his brother is so terrified about are real! 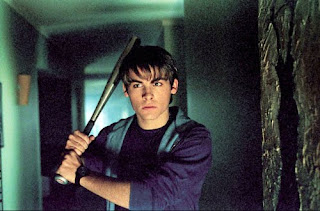 As a kiddy horror film, the most blood it features is that found on a cut fingertip, and there is of course no gore or skin (but then, had it the later it would have been kiddy porn, not kiddy horror). The nominal third young one of the film, a young lady named Heather (Rachel Skarsten of Jack Brooks: Monster Slayer [2007 / trailer]), is a contrived presence at best and totally unnecessary, and actually undermines the theory of the film (that you have to believe to be haunted) by being confronted by demonic versions of her phobia (dogs) without ever actually having the chance to begin fearing the things in the dark. (If she can simply be confronted by demonic versions of her fears, why can't everyone? Then Dale – and everyone else in the world – should have been terrorized long before his younger brother turned his belief into the real.) 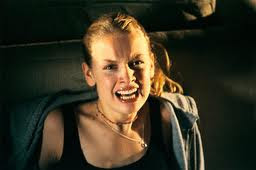 The film does manage to establish some good mood, but it is often subverted by stupid twists and unbelievable developments – but then, it is hardly believable that Ryan would ever have made it to his twelfth year in the first place if always confronted by the things in the dark. True, he is an inexplicable walking Wikipedia when it comes to knowledge about the evil things and how to survive them, but like Wikipedia, his knowledge is dangerously faulty at times: at one point, he states as a fact that they can't hurt you if you're under the covers, but in a later scene the evil things literally shred a feather bed comforter which looks as if someone is beneath it – had Ryan not been under the bed for a change, he would have been mincemeat. 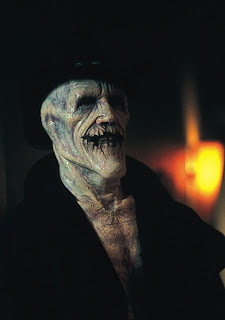 The acting is variable, the parents – Eric (Charles Powell of Screamers [1995 / trailer] and The 8th Plague [2008 / trailer]) and artist Sandy Billings (Linda Purl of Crazy Mama [1975 / trailer], Visiting Hours [1982 / trailer] and The Perfect Tenant [2000 / trailer]) – are so sugary sweet perfect that viewer gets diabetes whenever they appear on screen, and there are more unintentional laughs than real ones, but as a kiddy film Fear of the Dark not only taps that primal fear of the evil thing under the bed but offers an adequate (if shaky) explanation that could possibly make the film scary (and nightmare inducing) to the younger set.
There is a scene in the film in which the evil forces keep changing the TV back to Sam Rami's The Evil Dead (1981 / trailer) no matter how often Ryan changes the channel. As an adult – or even a mildly discerning horror fan – if you're looking for horror, you're better served re-watching that film than by watching Fear of the Dark. 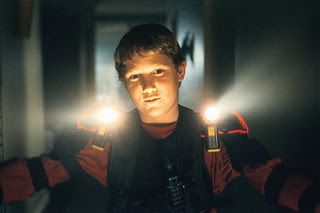 But, if nothing else, Fear of the Dark is a mildly tolerable introduction to horror for the young ones, if you have any, though it might be too Nickelodeon for the ones with training bras and peach fuzz.
Posted by Abraham at 6:31:00 PM