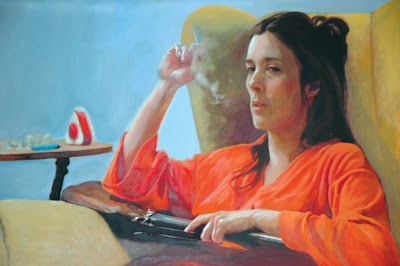 Now here a cinematic oddity that definitely does not deserve the total obscurity in which it wallows. Have you ever heard of it? No, we're sure, and neither had we – we ended up watching it only because it was on a self-made DVD given to us by a friend, sandwiched between the French zombie flick The Horde (2009 / trailer) and the US American B-film Skyline (2010 / trailer). We figured, with a title like Die Beauty, it would surely and merely be more of the same – but we were more than wrong. The commonality and placement of Die Beauty with those two better-known trash films is comparable, we would say, to a horny hetro 20-year-old naked male stoner sandwiched between two 50-year-old naked alcoholic bull dykes. In other words, while all three probably don't have much money and are entertaining on their own, they don't really mix as a trio…

As it is, we are unsure whether the "Die" in the title is the English verb for "to expire" or the German feminine definite article, "die" (as in: die Frau or die Beauté); indeed, one of the main characters of the film is German prostitute, so it could be that the title is less "Croak You Beauty" than "The Beauty"… for that matter, no one beautiful dies in this film, and those who do die, we would be hard placed to even call handsome. Asshole might be the term we would use, for each and everyone of them.

As revealed above at the top, Du Sköna is a Swedish film – and yes, it comes with subtitles – but unlike a few other recent, decent Swedish films (Girl with the Dragon Tattoo [2009 / trailer] and Let the Right One In [2008 / trailer]), it is doubtful it'll ever be remade in English by Hollywood. And, like the much better-known US American animation film from 2008, Sita Sings the Blues (2008 / full movie / trailer), it is a creative commons production. (Yep, Die Beauty was allowed to be on that DVD, even if the other two films weren't.) So if you wanna see this one, you can probably find it easy enough, but you're gonna have to use a few brain cells and read while you watch. Rest assured, however, it'll be worth it.

Well, then again, maybe not if you're not a fan of art films. You remember, long ago, when most towns had some ragged-edged movie theater that would show obscure, impossible-to-follow films in foreign languages that had no real start or real end? Like, dunno, The Valley Obscured by Clouds (1972 / trailer) or Black Moon (1975 / trailer) or even the fabulously nightmarish Possession (1981 / trailer)? Probably not, if you're under 30, but Die Beauty / Du Sköna is very much such an art film, although one that owes much more to decidedly less arty films like  Alex van Warmerdam's The Northerners (1992 / trailer) or Bent Hamer's Kitchen Stories (2003 / trailer) or even Anders Thomas Jensen's Adam's Apples (2005 / trailer) than to anything as over-the-top as Possession or even Franco's Virgin amongst the Living Dead (1973 / scene).

In other words, the events that occur are presented naturalistically and as if they were a normal as apple pie, but there is nevertheless an underlying bizarreness that shifts the events into mild surrealism. Like the classic art films of the in-retrospect decidedly open and flexible 1970s, Die Beauty / Du Sköna, aside from having subtitles, sort of defies interpretation and logic and traditional narrative (i.e., start-middle-end) and instead just sort of meanders along for intriguingly peculiar 83 minutes that occasionally even make you laugh – and definitely leaves you scratching your head at the end, totally unsure about what the fuck you just watched.

Which isn't to say that Die Beauty / Du Sköna isn't a disturbing film, for it is. It is just that its disconcerting tendencies are often well balanced by its general quirkiness and dryly surreal humor. The general events involve a circle of pubescent red-headed girls and a pubescent blond who wishes not only that she too were a redhead but that she would one day see a dead body. Their mothers are mostly ciphers, but the husbands and men are all but for one (two, perhaps, if you count the undertaker) total assholes. And in this dull, little town next to a lake, the (male) bodies begin to pile – that is, they would if the nice guy didn't keep disposing them at the bottom of the lake. (But for one woman, you never ever actually see the women kill anyone, but the indications are there that they are indeed responsible, if not actually in cahoots. And while we know for sure that one father, the absentee father, is in Africa, the wife nevertheless also adds him to the lake in a way by removing all his African artifacts from their house, bagging them, and tossing the bag into the lake – drowning him, so to say, in absence.) And amidst it all, a German-speaking prostitute whose only friend is the young blond girl and who would like to do nothing more than change her career…

It would seem that small-town Sweden is a simmering pot of dissatisfaction and alienation where emotion is not shown and inaction hides unspoken hate. Everyone in the town – and particularly the little girls – seem to wish that things would change in one way or another, and as the filmmakers themselves say on their blogspot, "if you wish for something hard enough..." Underscored by a fabulous soundtrack that we wish we could get somewhere, Du Sköna weaves an oddly hypnotic web. It is, in truth, so idiosyncratic and individualistic that it is a love it or hate it film, and undoubtedly it is easier to hate because it is so defiantly non-mainstream. But if you open your mind and go with the flow, you just might find that its strange – if uncomfortable – magic carries you along. We thought it great, one of the oddest, most original things we've seen in a long time, featuring a surprisingly memorable cast of truly excellent child actors who often speak volumes without even saying anything.

(The undertaker's lonely daughter is worth a horror film all of her own.)
Yes, Die Beauty / Du Sköna is without a doubt an art film – but, damn it! It's a good film, too.
Posted by Abraham at 1:53:00 PM