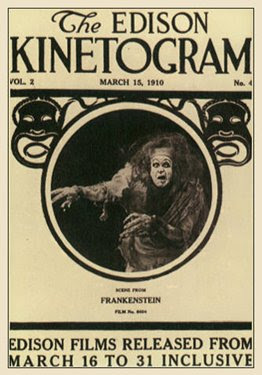 Last month we took a look at a short that is considered by many as the first "horror" film ever made, Georges Méliès's The House of the Devil (France, 1896). This month we take a look at another Goldie Oldie in the history of horror, namely the first film version ever made of Mary Wollstonecraft Shelley's proto-science fiction novel Frankenstein; or, The Modern Prometheus (1818). The movie was considered lost for decades, only for a copy to show up in Wisconsin in the mid-1970s amidst the collection of the reclusive silent-film collector Alois F. Dettlaff, Sr, who, when he died in July 2005, lay dead and decomposing in his house for about a month.
Mary Shelley's book has been filmed and remade and reinterpreted innumerable times by now, and it is doubtful that even the most novice horror film fan has not seen some version or the other. (Our personal favorites are the two standard works, James Whale's Frankenstein [1931 / trailer] and Hammer's The Curse of Frankenstein [1957 / trailer], but we do also have a soft spot for the loose TV adaptation, Frankenstein: The True Story [1973 / trailer].) But before all the feature-length films, there was this early and somewhat primitive short which, well, doesn't win any awards in direction or acting or narrative, but does have a pretty groovy creature with bad hair. The early special effects are a creative hoot, too. 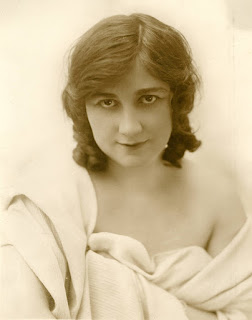 Directed and scripted by James Searle Dawley (4 Oct 1877 – 30 Mar 1949), a former actor, the movie was shot over three days in the Bronx. A production of Thomas Edison's Edison Studios, Frankenstein is a typically loose adaptation of Shelley's novel. When originally released, the small cast of the "photoplay" was not even credited, but by now the names behind the main characters of the small cast are general knowledge: Augustus Phillips (1 Aug 1874 – 29 Sept 1944) is Dr. Frankenstein, Charles Ogle (5 June 1865 – 11 Oct 1940) is the Creature, and Mary Fuller (5 Oct 1888 – 9 Dec 1973), pictured above, is the Elizabeth, the doctor's fiancée. Though none are familiar names today, all three were actors of varying success. Mary Fuller's popularity, for example even supposedly rivaled that of Mary Pickford at one point, but the loss of her career and other personal tragedies saw her spend the last 26 years of her life in, St. Elizabeths Hospital, a psychiatric hospital in Washington, D.C. 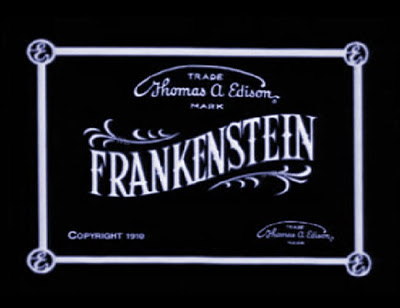 As can be imagined due to the short length of Frankenstein, the narrative is somewhat choppy and incoherent. The music, by the way, is new: it was composed by Donald Sosin.
Frankenstein (1910):
Posted by Abraham at 5:29:00 PM