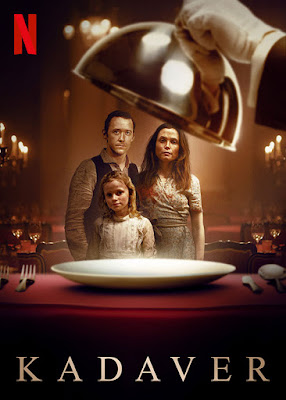 (Spoilers) The plot? In a post-nuclear future, a starving family attends an immersive theatre performance with meal at a mountain hotel that is far less altruistic than it appears to be. Cue-in a lot of confusing corridors and rooms and secret passages and non-stop running around — oh, yeah: and occasional red dresses floating down the atrium-space of the majestic hotel stairwell…
Trailer to
Cadaver:
Really, could they not have chosen another name for this flick? Its title is about as blatant as an "Idiot" sign stuck to the back of a MAGA-cap wearer, trumpeting the big reveal before the film even starts. Not that a single, specific cadaver actually has any major role in the movie, but it pretty much makes it obvious from the start what direction the evening's entertainment is going to go (both within the film itself and at the hotel that is the central setting of the narrative.) Really, it wouldn't have taken any great level of creativity to come up with a better title. Obvious choices like Performance, Theatre of Death, Theatre of Blood or Horror Hotel might already all be taken by better films — (1970 / trailer), (1965 / trailer), (1965 / trailer)  and (1960 / trailer) respectively — but even something as mundane as Dinner Theatre or Meal Included would have been a better, if not far more subtle, choice.

But then, for all the initial promise of the excellently envisioned, almost steam-punk, retro-dystopian, post-nuclear setting and the corresponding mise-en-scene of the film's narrative world, once the narrative moves to the grand hotel on the hill, Cadaver never truly rises above the level of an artily shot big-three* television movie, so the trite unoriginality and obviousness of its title is pretty much reflective of what the beautifully shot movie delivers on the whole. 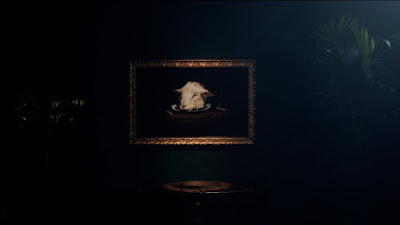 * As a compound adjective, "big-three" may have outlived its usefulness and/or clarity. In the early days of pay TV in the USA, it was a reference to the three traditional commercial stations in the US of A, ABC, CBS and NBC. Nowadays, long after the advent of Pay TV and channels like FOX, they would seem hardly the biggest of available channels.

The sophomore feature film of writer-director Jarand Herdal (his first: 2013's Everywhen [trailer]), the dank and depressing cobblestone streets of the post-nuclear world of the unnamed European city seen in Cadaver proffer a visually intriguing setting for any number of stories, and while the narrative that ends up getting served might fit the situation (to an extent, at least), its overall development and execution are predictable, drawn-out and ultimately both uninvolving and yawn-inducing. Worse, one too many narrative turn taken (often at the expense of logic, believability and/or continuity) is on the level of a low-rent mainstream TV series or, worstest of all, any given Walking Dead spin-off. (Which, as you may know, are generally even more idiotic than what The Walking Dead has become.) Characters do amazingly stupid things considering that they live in post-nuclear times, the most obvious being how the daughter, Alice (Tuva Olivia Remman), keeps wandering away and how the parents keep getting distracted, not to mention how easily they trust anyone that crosses their path. 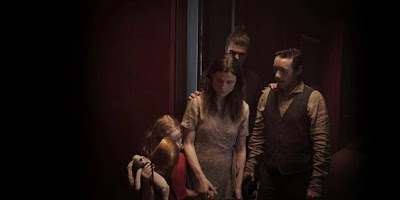 And then there are the "twists": the developments that come from nowhere that are meant to pull the rug out from under the viewer, not to mention a given character. Perhaps the biggest "twist" of the film is the one that ensures that the movie's core female figure of identification, Leonora (Gitte Witt of The Sleepwalker [2014 / trailer]) doesn't end up getting slaughtered like a kosher pig. Unluckily, it is both the most bird-brained and the most expected — indeed, when her husband, Jacob (Thomas Gullestad of The 12th Man [2017 / trailer]), starts wrestling with big guy in a butcher's apron and yells something like "Run, Leonora! Run!" and she escapes so easily, we for one already thought, "Oh, no, the film's not going to go that way, is it?" It did. 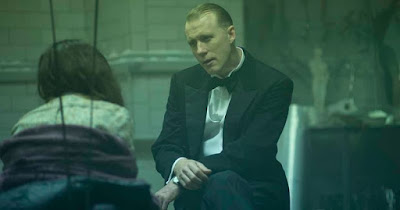 And speaking of guys in butcher's aprons, alone the massive number of them running around in the tunnels, not to mention one minor character's sudden re-appearance with knives and apron or even the opening scene in which a little girl in front of a pile of clothes — a strong visual definitely reminiscent of the piles of worldly goods of the concentration camps of WWII — tosses away a shirt because of blood stains, would all indicate that the later proclamations of semi-ignorance* of all the angry dinner-theatre actors are less than truthful. (If two can keep a secret only if one is dead, pray tell how can a secret be kept when dozens and dozens of people obviously know it?) 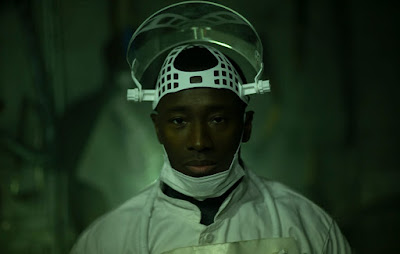 * Semi-ignorance in that they were obviously okay with people being killed and robbed, but not with being killed, robbed and [guess]. That, too, of course, is oddly reminiscent of the proclamations of "We didn't know" exclaimed so loudly by so many in the aftermath of WWII and the liberation of the concentration camps. Besides, as evident in the scene where our heroine, Leonora, almost becomes kosher meat: in Cadaver, the people involved know everything. 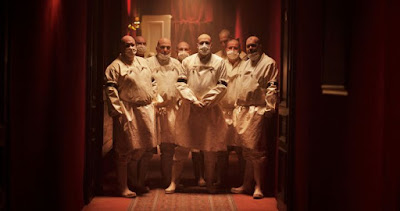 But then, the resolution of the narrative is perhaps one of the weakest aspects of the movie. Not what Mommy Leonora does to save the day, per say, as that is actually rather resourceful, but rather the way that everything just peters out: after a moment or two of pandemonium, a knifing and the total loss of everything are undermined and undone by an unexpected "happy" twist, and then suddenly everyone is gone and the hotel is empty. Excuse me? The place is a treasure chest of worldly goods, not to mention electricity and heating, things one and all that a starving society would surely pick clean or linger in once the danger is gone. And it's not like the guys in butcher aprons had any reason to run away, either. 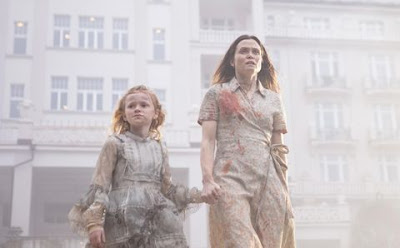 At least the final scene of Cadaver (which once again leans towards the director's appealing penchant for arty visuals), with the sun-lit hotel in the distance, does add an ambiguous "what-is-worse?" tone to the resolution. That final scene on the street is easily one of the best and most affecting moments of the entire movie (next to Leonora's unexpected, life-saving brainstorm that leads to the collapse of the bad guys' best laid plans). But neither a decent mise-en-scene nor one or the other nice visual or well-shot scene can save a predictable, third-rate story, and that is all that Cadaver delivers. 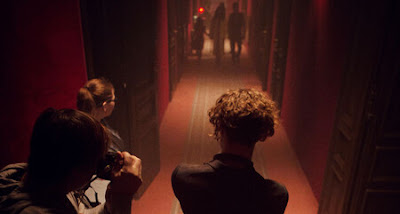 And the lesson(s) learned from today's movie? The old chestnut(s): if something sounds too good to be true, it probably is… not to mention, there ain't no such thing as a free lunch. 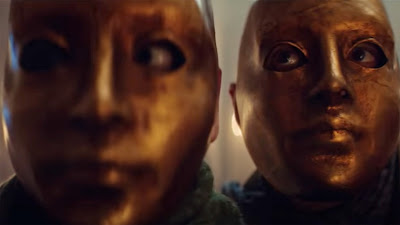