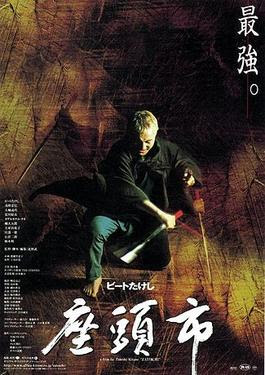 "Even with my eyes wide open I can't see a thing."
Zatôichi (Takeshi Kitano)
The seemingly now defunct website 10K Bullets [R.I.P.] once had the plot to Takeshi Kitano's 11th directorial effort: "Zatoichi (Takeshi Kitano) is a blind swordsman who lives off the land. He sometimes works a masseur to help pay for his gambling habit. Zatoichi arrives in a remote village that is at the mercy of two rival gangs. Along the way he meets two geishas who use their beauty to trap and kill those who murdered of their parents. [One of the geishas is actually transgender.] Ginzo (Ittoku Kishibe) hires Hattori (Tadanobu Asano of Tokyo Zombie [2005 / trailer]), a samurai for hire, to take care of his rival gang. Zatoichi soon crosses Ginzo, which leads to a bloody showdown between Zatoichi and Hattori." 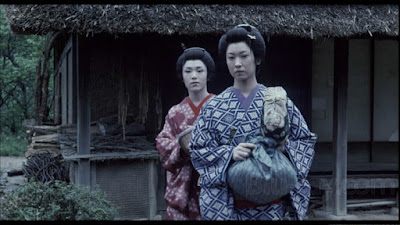 The fictional character Zatoichi is arguably as through-and-through Japanese as Superman or Batman is American, and while the latter two have been around longer and have a greater international cultural presence, in the Land of the Rising Sun Zatoichi cannot be sneezed at: since he was created by the novelist Kan Shimozawa, Zatoichi, a blind masseur and kenjutsu master, has been featured in more than 26 films, a Japanese TV show of 100 episodes (1974-79), innumerable comic books and graphic novels, a theater production (directed by Takashi Miike), and of course the original books. In 1990, he was even Americanized when Phillip Noyce very loosely remade the 17th Zatoichi film, Zatoichi Challenged (1967), as Blind Fury (1989 / trailer), starring the late & great Rutger Hauer (23 Jan 1944 – 19 July 2019 of The Hitcher [1986] and Hobo with a Shotgun [2011]) as the blind, Vietnamese-trained (?) swordsman Nick Parker. 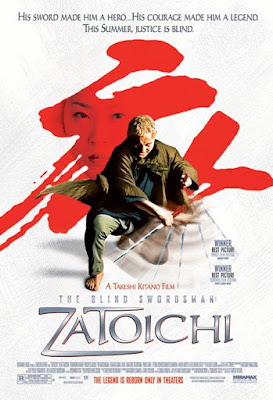 Trailer to
The Blind Swordsman: Zatoichi
In Japan, the Adam West (19 Sept 1928 – 9 June 2017) of Zatoichis is probably Shintaro Katsu (29 Nov 1931 – 21 June 1997). He played the role of blind masseur in 25 Zatoichi films released between 1962 and 1973, in the 100 episodes of the four-season Zatoichi TV series that ran in Japan in 1974 to 1979, and in the 26th Zatoichi film released in 1989, which he also directed. (Trivia: "Stunt actor Yukio Kato was killed on the set of Zatoichi 26 by Katsu's son, who was co-starring, when an actual sword was mistaken for a prop, fatally wounding Kato. [Wikipedia]" To the eternal thanks of trash film fanatics, Katsu also produced the series of six films starring his brother Tomisaburo Wakayama (1 Sept 1929 – 2 Apr 1992) that were later edited together to make the grindhouse classic, Shogun Assassin (1980). 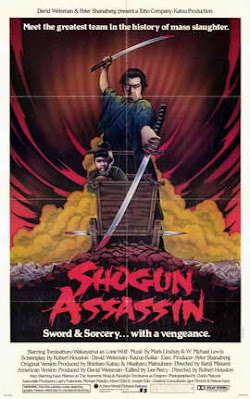 Trailer to
Shogun Assassin (1980):
As the advertisement above reveals, the fifth of the 27 Katsu Zatoichi films was once paired, in typically incongruent grindhouse fashion, with Ted V. Mikels' The Black Klansman (1966 / trailer), the title track of which we took a meandering look some months ago here at Film Fun: Music from Movies – The Black Klansman (USA, 1966). And 14 years after the 26th Zatoichi (a.k.a. Zatoichi: Darkness Is His Ally [trailer]) hit the screens in 1989, The Blind Swordsman: Zatoichi was made. 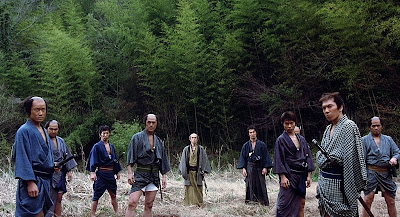 We caught the award-winning The Blind Swordsman: Zatoichi in a cinema in Berlin and, despite some truly questionable CGI-generated blood, loved it enough to have watched it a couple of times since on DVD and late-night TV. (Give it a go if you ever have the chance; you'll probably enjoy it.) Supposedly the questionable-looking blood was an artistic decision on part of the director and lead star Takeshi "Beat" Kitano to soften the effect on the viewing audience — an odd decision from an auteur who is found in movies like Violent Cop (1989 / trailer) and Battle Royal (2000 / trailer).

But to be honest, while the music is as good as one might expect in a good movie, there is little about the soundtrack that truly bowls us over. But there is a totally unexpected and (to us) left-field, music-related interlude in the film at the very end that we always find absolutely fabulous — and that is what we want to look at here. It is the closing dance number, prior to the freeze-frame last scene of Zatoichi tripping to the voice-over line, "Even with my eyes wide open I can't see a thing." Basically, all the good guys of the movie get together on stage and do a dance: first, a more traditional one with but four dancers, and then a modern tap dance number involving all the good guys of the cast. (Zatoichi isn't doing the twist with everyone else because he is a bad guy of sorts, or at least morally questionable.) According to the trivia section on the film at imdb, "The end dance sequence is a tribute to many of the popular Japanese films, in which the Hollywood-style happy ending was followed by a sudden 'burst into song'. Kitano wanted to attempt this, but in a different type of way. Kitano combined traditional Kabuki theatre clog-dancing with 'the latest African-American tap style." Enjoy.
Final dance scene of
The Blind Swordsman: Zatoichi
Posted by Abraham at 8:27:00 PM