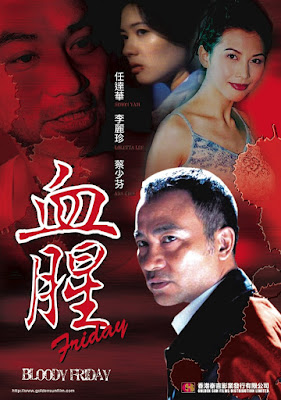 Not to be confused with Bloody Friday a.k.a. The Single Girls a.k.a. Private School (1974 / trailer) or Bloody Friday a.k.a. Blutiger Friday (1972 / trailer). The trailer to this Hong Kong flick here in question is not currently available online, but for that the film itself is easy to find at YouTube.
(Spoilers.) Friday Killer, the German title of this obscure Asian police "thriller", is actually more appropriate than the common English-language title, Bloody Friday, as the flick is not about some Friday that turns out to be exceptionally bloody but, rather, tells the tale of a motorcycle-riding serial killer who strikes every Friday night. The killer starts off by doing away with working women of the night, but after killing an undercover policewoman the motorcyclist graduates to women in general, including (the only victim the viewer never sees) the female director of a Catholic girls school where some of the virtuous young girls might actually earn their pocket money by working the streets after school hours. (A mostly extraneous point suggested but never followed up in the movie.) 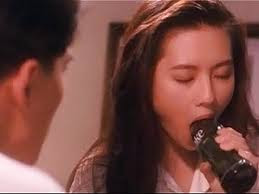 Opening with a lone woman terrorized and chased through the narrow streets of deserted Hong Kong — are the streets of Hong Kong ever truly as empty as those in this film? On a Friday? — before she gets knocked upside the head with a pole and left for dead. (Which she is.) Then we meet the free-spirited Maggie (Loletta Lee a.k.a. Rachel Lee, pictured above from a different film, of Heiße Katzen in der grünen Hölle / Angels with Golden Guns (1981/ trailer], Hoi sam gwai / The Happy Ghost [1984 / trailer], Geung see suk suk / Mr Vampire IV [1988 / trailer], Yin yue jiang shi / The Musical Vampire [1992/ trailer]  and  Chat ho chai goon / Nightmares in Precinct 7 [2001/ trailer]), who comes across less as free-spirited hooker than simply bat-shit crazy. Subtlety of characterization does not raise its head in Ms. Lee's thespian endeavors in this movie; indeed, if the acting in Hong Kong films in general tends towards the theatrical, her performance tends towards terribly theatrical (emphasis on terribly). 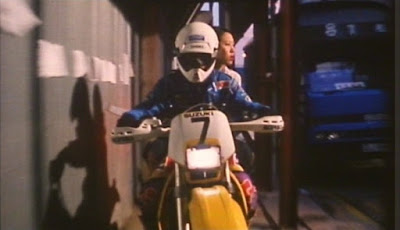 The fellow hooker who she briefly terrorizes soon also ends up dead, so her possibly gay pimp and she get pulled in for questioning — she definitely does not like hardworking cop Ken (Stephen Au Kam-tong of Moh ging / The Demon Within [2014 / trailer], Gau geung ching dou foo / Vampire Cleanup Department [2017 / trailer] and Sei yan mou ho yi / Legally Declared Dead [2019 / trailer]), but takes a shine to the smooth-looking, tanned and leanly muscular alpha-man Inspector Ko (former model and Hong Kong star Simon Yam of  Naked Killer [1992 / trailer], Sparrow [2008 / trailer – a good film with a great soundtrack],  Sang yan mat kan: Che fa / Horoscope II: The Woman from Hell [2000 / film],  Wu ye xin tiao / Midnight Beating [2010 / trailer], and so much more). The next important plot point that follows is how the major stakeout that Ko sets up the next Friday goes completely south and results in the death of hardworking cop Ken's cop girlfriend, which sets up a rivalry between the two that results in Ken's temporary suspension. Worse, it also seemingly makes the motorcyclist murderer take notice of Ko in that typically movie way: a electrically modified voice informs Ko that he's going to kill five more people and then Ko's wife and child… 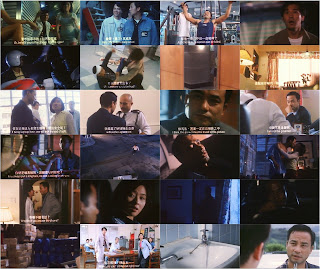 The motorcyclist killer — Oh! Spoiler! – killers have nerves of steel and an ability for gravity-defying motorcycle driving that puts even Tom Cruise (see: Mission Impossible II [2000 / trailer]) to shame – as does Ko, actually, but he's just less-skilled enough that it makes a difference. The person on the bike also has an amazing ability to see all things in advance: he escapes Ko in the first big chase because of all sorts of hilarious traps clearly set up in advance to stop anyone from chasing him. Also, the killer obviously sits and waits far in advance of his killings, as proven by scenes like when the cyclist suddenly pops out from behind a wall of boxes inside a truck or sets up a trap in the middle of the street to trick Ko and Maggie. (Which leads up to a fight in a warehouse full of empty boxes that, in turn, resolves in such a way that one suddenly realizes that the film might not end to the advantage of the vain and cocky lead.) 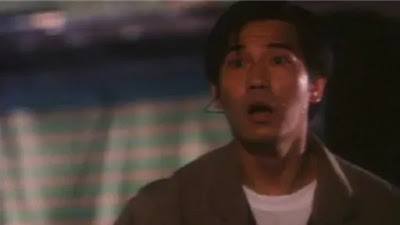 The cops in Friday Killer are pretty much all idiots. Mostly hotheaded or incompetent, they are always surprised and overwhelmed when the killer shows up, sort of like Asian Keystone Cops with guns and kung-fu fighting skills. None of them ever seem to follow basic police procedure or conduct any real investigative work, as almost no clue is logically pursued. And while it seems easy enough to organize stuff like 100 plainclothes on the street and 80 sharpshooters on the roofs up above, none of them ever calls for backup when they should, even if they still have their cell phone in their hand. Invariably, they also always wait way too long to draw guns — indeed, Ken waits so long to draw his that it could be argued that he is more responsible for the death of his girlfriend than Ko. 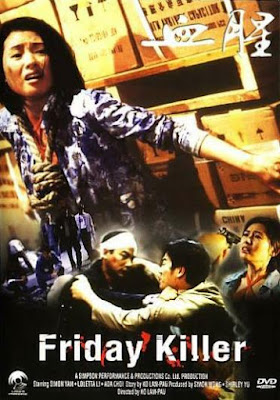 As insinuated earlier, the resolution of Bloody Friday is startlingly bleak, enough so that it almost redeems the movie. Up until a few minutes before the final showdown, one really has a hard time digesting that the film is obviously indeed going for a downer ending. And what a downer, indeed. 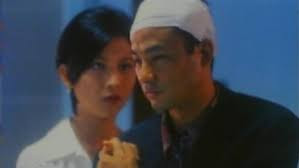 Nevertheless, on the whole the movie remains what it is: a mildly interesting and intermittently enthralling ridiculously plotted slice of Hong Kong product with mostly well-staged but barely plausible set pieces, a typically outdated view of manliness and women, an unlikable and inflated hero that is hard to find much sympathy for (at least until the final scenes), and some truly bad acting — really, Lee's live-for-the-day turn as Maggie is beyond annoying, although one does begin to like her as a person towards the end when she ratchets down her performance and shows some believable characterization. 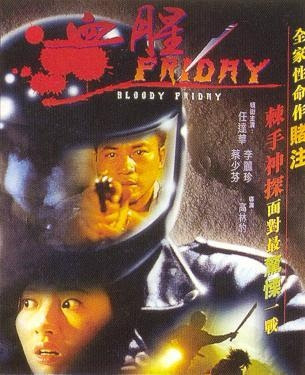 The final revealed motivation(s) of the killer(s) are, of course, the stuff of movies and defy any and all believability. Indeed, one motive involves a revenge-seeking, previously law-abiding person to suddenly do a 180% turn and resort to multiple murders (including an innocent coworker) just to get revenge, while the other motive, well, we're still trying to figure that one out. 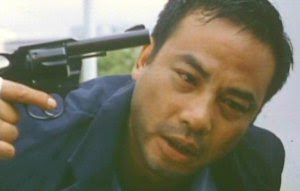 Verdict: better than nothing, but don't bother to search this one out. You might be better off and have more fun with a Drunken Friday… Or a Stoned Friday… Or a Hallucinogen Friday….
Posted by Abraham at 8:55:00 AM