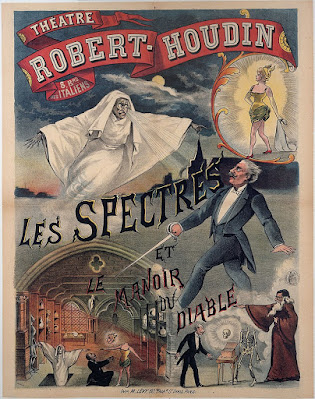 Original title: Les Spectres et Le Manoir du diable. Not to be confused with Ty West's feature film, The House of the Devil (trailer) — this film here is much older and (Duh!) shorter. 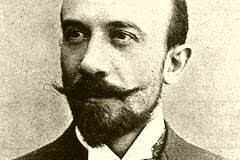 This month's short film, an early project of the pioneering French Master Georges Méliès (8 Dec 1861 – 21 Jan 1938), above, is as much of a Goldie Oldie as it is both short and in bad condition. It is the oldest film we have ever presented here, beating out the second oldest, Segundo de Chomón's The Haunted House (1908), our Short Film of the Month for October 2018, by a good 12 years. Both films share a similar theme, experimental joy and tilt (despite the shared "horror" elements) towards the comical. And, as we wrote back then about The Haunted House, when it comes to The House of the Devil, "We would be lying if we didn't say that [the film] looks its age but, that said, we still find this […] an amazing piece of film history, one that can and should be appreciated as an early visual and special effects treat." Basically, this little film here be the granddaddy of our favorite genre in film: it is to movies what The Castle of Otranto is to the novel.
Yep, House of the Devil holds a particularly special place in the history of film, as Wikipedia [accessed 21 Apr 2021] explains in its introductory paragraph on the film: The House of the Devil, "which depicts a brief pantomimed sketch in the style of a theatrical comic fantasy, tells the story of an encounter with the Devil [very much of a Faustian model] and various attendant phantoms. It is intended to evoke amusement and wonder from its audiences, rather than fear. However, because of its themes and characters, the film has been considered to technically be the first horror film."
More like comedy horror, to tell the truth, as little about the 3-minute short – an "innovative" length for the times – is scary, but much garners a smile. (Of course, we would all probably react differently to the short if we didn't have 125 years of films behind us.) Indeed, Georges Méliès' A Nightmare (1896 / full film), which is constructed around the first dream sequence in film history (and that, of course, includes a black face interlude because that is what all white men dream about at night), is a bit more discombobulating in its horror elements than the scène fantastique looked at today, but unlike in The House of the Devil, all the funny stuff that transpires is a dream and not "real" – and thus not really horror, at least in our eyes.
Georges Méliès's
The House of the Devil (1896):
The first ghost film, BTW, assuming you do not count the three-second appearance of the five floating sheets in The House of the Devil, is the British Photographing a Ghost [1898]; unluckily it is a lost film (so check your granny's attic). The House of the Devil was once a lost film, too, but in 1988 a copy was discovered down under in the New Zealand Film Archive. Proving that Hollywood did not start the trend of unnecessary remakes (really: Cabin Fever [2016 / trailer] just 14 years after Cabin Fever [2002 / trailer]?), director Georges Méliès sort of remade The House of the Devil a year later as The Haunted Castle / Le Château hanté (1897 / fragment) – although at least that film had a new aspect to it: it was in (hand-colored) color. 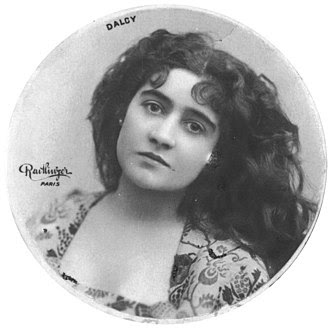 As common with many of the films back then when the industry was less an industry than simply teething, the actors are not credited and most are unknown. In The House of the Devil, the only thespian known for sure is the woman who comes out of the cauldron: the at-the-time successful stage actress Jehanne d'Alcy (20 Mar 1865 – 14 Oct 1956), above, born Charlotte Lucie Marie Adèle Stephanie Adrienne Faës, who eventually married Georges Méliès in 1925, after his first wife died, and remained with him through thick and the mostly thin that was to come, until the very end. As a member of his regular film troop, she went on to appear in what is possibly the first mummy film, Méliès' lost short Robbing Cleopatra's Tomb (1899); in one of the possible first films to have (simulated) full "nudity",* Méliès' After the Ball aka The Bath (1897 / full film); and, again in Méliès' films, she is probably the first actress to play, on film, the French heroine Joan of Arc in (Duh!) Joan of Arc (1900 / film), not to mention probably the earliest iteration of a fairy godmother, in Cinderella aka Cendrillon (1899 / film). (Méliès, you might note, was "first" or close to first a lot when it comes to film.)
* For more early "risqué" fun, dare we suggest you check out our Short Film of the Month for July 2012, The Unexpected Experience of Two Girl Hitch-Hikers (exact date unknown). 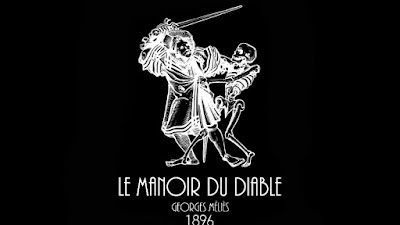 Less definite is whoever it is that plays the Mephistopheles-like devil. Some sources credit the director himself as the actor, but the general consensus is that the devil is played by the magician Jules-Eugène Legris (1862 - 1926), who also appeared in a few other Méliès films. In truth, the condition of the surviving film is too poor to say for sure… but, going by the beards, we would tend to think that Méliès plays the put-upon nobleman, not the devil.
Posted by Abraham at 8:51:00 AM