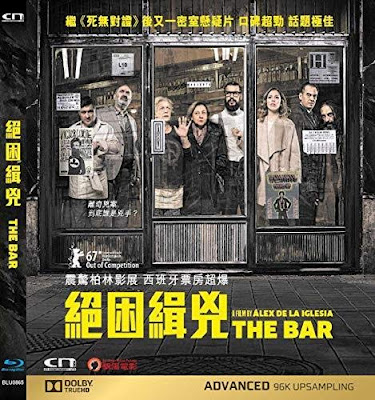 (Original title in Spanish: El bar. Hmmm, wonder what that means.) Spanish filmmaker Álex de la Iglesia may be one of the better Spanish-language filmmakers around, but for whatever reason he hasn't yet made the jump to international mainstream name familiarity à la the Mexican Guillermo del Toro, despite having helmed two English-language projects, the highly disappointing Perdita Durango (1997 / trailer) and a film we have yet to see, The Oxford Murders (2008 / trailer). We might venture to suggest that de la Iglesia's taste and humor is perhaps a tad too Spanish to translate as well as del Toro's multi-faceted vision of horror, but that is merely a hypothesis that we wouldn't put money on. But while the reason(s) that de la Iglesia has remained primarily a homeland filmmaker are open for conjuncture and argument, what is really evident and true is that the man makes some truly excellent movies and, at least in our view, is one of Spain's most interesting genre filmmakers. (See, for example, Acción Mutante [1993] and El día de las bestia [1995], or even his somewhat less than satisfying La comunidad [2000 / trailer].)
Spanish trailer to
The Bar:
El bar is a great film for our age of paranoia and conspiracy theories. Were the movie not so blackly funny, it would be a great film for a Q-Anon film night: the government of this film definitely wants to hide something, and is more than willing to accept the death of some half dozen Joe and Jane Schmoes to keep face and contain the damage. Deep state at work! (Or maybe the Illuminati? The Masons? No – surely the Rothschilds!)

Naw, the government at play here is the Spanish one, of course, and the events of the bar occur on a "warm and sunny day" in the happening metropolis of Madrid, an overrated city if there ever was one (ignoring, of course, the Prado). The movie opens with an excellently shot street scene that could lead one to believe that de la Iglesia was trying to pay homage, à la Robert Altman's first minutes of The Player (1992 / trailer), to Orson Welles' famous and far more baroque three-minute-plus single-shot opening scene in A Touch of Evil (1958 / trailer / shot), but found it impossible to maintain the continuous camera. Nevertheless, the opening scene does an excellent job at capturing the noise and speed and chaos of contemporary urban street life of Spain, even as we are introduced in passing to four of the protagonists of the film: babe Elena (Blanca Suárez of Eskalofrío [2008 / trailer] & Tiemo después [2018 / trailer]), homeless nutcase Israel (Jaime Ordóñez), generic businessman-type Sergio (Alejandro Awada of La araña vampiro [2012 / trailer]), and the formless housewife Trini (Carmen Machi of  Pieles [2017 / trailer]). They all subsequently converge, for varying reasons, in a relatively generic Spanish bar where, after some drily humorous exchanges and interactions and character introductions, the shit hits the fan.

Or, rather: a bullet hits a head. A man leaving the bar gets his head blown off by a sniper, as does the city maintenance worker (Jordi Aguilar of Cuerdas [2019 / trailer]) who goes out to help him, and the once-teeming neighborhood streets are suddenly empty of all people. But once officials finally show up, they are anything but reassuring or helpful: anonymous, armed and wearing gas-masks, they clean the street of the dead and blood, and set tires afire in front of the bar. According to the news reports on TV, a major fire has broken out in downtown Madrid — of the sniper deaths nothing is said, much less anything about the people still in the bar. And then there is a noise in the men's toilet…

Once the first man falls, the movie does an excellent job at maintaining suspense and tension up until the final scenes in the city sewers. At the same time, at least for the period of the film set in the bar and the bar's basement, the filmmakers do a first-rate job at maintaining a drily effective layer of blackly humorous dialogue and situational comedy, never once slipping into any excesses of the overly farcical, as is sometimes the case with de la Iglesia's films (see: La comunidad), if not "humorous" Spanish films in general.

Trapped behind the plate-glass windows of the bar and cut off from the world, the surviving patrons manage to figure out the what and the why of their situation. Disparity and distrust becomes unity becomes watching out for number one, the differing attitudes coming in waves driven by the different development arising… 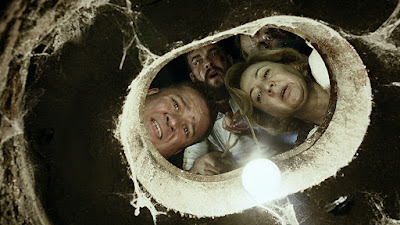 While blackly funny, The Bar never loses sight of its thriller aspects nor of its exploration of human nature under enormous stress. Certain plot aspects do not survive strong scrutiny — the quickness with which a central Madrid neighborhood is emptied for one, for example, not to mention the total lack of social-media rubberneckers that such an event would engender in real life — but the speed and suspense and tension of the narrative make it close to impossible to notice, much less dwell, on such flaws. Even the red herring of the rucksack of the character of Nacho (Mario Casas of the unpleasant but intriguing thriller The Occupant [2020 / trailer] & de la Iglesia's Witching Bitching [2013 / trailer]) and his almost slapstick attempt to hide it escalates so quickly that one [almost] forgets to ask "Why?" in regards to his actions. 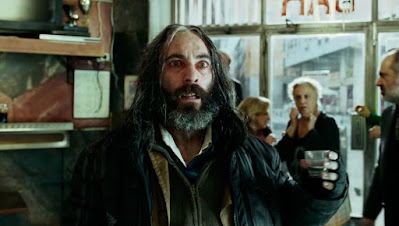 Arguably, the last 15 minutes of The Bar do swerve a bit too much into the realm of the bodycounter, with the most predictable choice of all the survivors becoming an almost typically unstoppable killing machine. That aspect, however, also enables to the movie to ratchet the tension even as it returns to its exploration of personal growth and sacrifice. Likewise, the final street scenes could also have been shortened, for although a point is made (the disinterest of urban society and, in turn, how readily the masses overlook/ignore the abnormal in a modern urban setting), by extending the event throughout most of the credit sequence it ends up becoming an example of the male objectification of women instead of the social criticism de la Iglesia wants to pretend he's presenting. (Anyone else out there catch the obvious visual reference to certain photos of one of the greatest objectifiers of all time, Helmut Newton?) That said, any hetero male would probably agree that Blanca Suárez is a woman well worth objectifying, and she does look hot even in filthy skimpies. (Mario Casas's hipster Karl Marx beard, on the other hand, stops him from being sexy even when he's in his tighty-whities.) Lastly, The Bar also totally ignores (but then it is a movie and not a TV series) the fact that, in the end, in all likelihood no virus was contained, for the bodies of two possibly infected people remain in a place that would be ideal for its quick spread.

Whatever easily overlooked flaws are found in The Bar, none in any way hamper the effectiveness of the film as a suspense movie or black comedy. The tightness of de la Iglesia direction, the sincerity of the actors, and the speed and twists and humor of the narrative make sure that one is too engrossed by the events at hand to dwell upon any creative glitches. The Bar is well worth watching, and is definitely a satisfying filmic experience. And Spanish filmmaker Álex de la Iglesia really deserves greater international recognition.