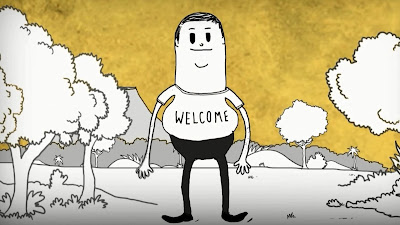 We've long thought about presenting a Steve Cutts short as a Short Film of the Month, ever since, many moons ago, we first saw the great music video he did, in the style of a Max Fleischer cartoon, for Moby & The Void Pacific Choir's ditty, Are You Lost in the World Like Me? Way back then, we promptly went online and to his website and saw his other great shorts, including the hilarious Where Are They Now?, which we ended up rejecting simply because we found that we couldn't get past the [possibly incorrect] knowledge imparted by the original movie, Who Framed Roger Rabbit? (1988 / trailer), that the only way to kill an animated character is the Dip of Doom (which was filled with acetone, wasn't it?). And thus we dithered, until other shorts distracted us and no Cutts film was ever presented...
But then, the other week, we finally entered the Lost World of Cutts's Moby video when our classic Motorola "Beam us up, Scotty" Razr finally died and entered the trash pits of Agbogbloshie. We inherited our first smartphone from our significant other's drawer of outdated models, the perfectly sized Iphone 5. And we promptly took our first step towards selling our soul to that evil firm from hell, facebook, by adding WhatsApp. And sitting here in corona-induced lockdown in our huge garden on Mallorca, suffering that jail feeling (NOT!) just like Ellen Degeneres — jail has never been this good, even though our place ain't worth no millions, that's for sure, and we do both our own cooking, cleaning and butt-wiping — we began to get our first Iphone fixes. And the first WhatsApp dose we got was of a video we had seen years ago and thought fab: Man, by Steve Cutts. What better way to begin one's arm-crotch itch for the smartphone?
The short, created using Flash and After Effects, possibly needs no introduction as it is considered to be his most popular short film. The classical piece it is set to is In the Hall of the Mountain King by Edvard Grieg (composed 1875), a tune many might know from Needful Things (1993 / trailer), or as that whistled by Peter Lorre in Fritz Lang's classic M (1931 / full film), if not from your parents record collection. [For a killer version by Nero & the Gladiators, go here; for a whacked-out by The Who, go here.] A variation of the piece is also found in our Short Film of the Month for Oct 2014, Hell's Bells (1929).
In any event, please savour a level-headed representation of mankind's innate and indomitable urge to destroy as presented in Man by Steve Cutts, "a London based freelance artist, 'specializing' in animation, illustration and fine art."

"One day, we might receive a signal from a planet [...]. But we should be wary of answering back. Meeting an advanced civilization could be like Native Americans encountering Columbus. That didn't turn out so well."