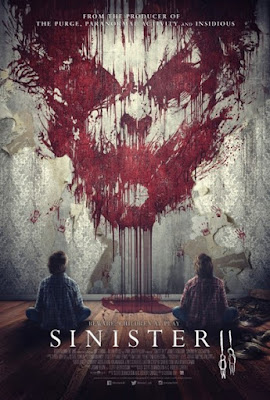 Ex-Deputy So & So (James Ransone of The Valley of Violence [2016 / trailer], seen below with a friend but not from this film), perhaps the second most-likable character of the first movie — the first being the writer's wife, Tracy (Juliet Rylance), who like all other main characters of Sinister (2012) isn't around for a sequel — has made it his mission to destroy all the houses in which the demon Bughuul, the eater of souls, has led a child to kill their family. He hopes that doing so will end the demon's evil influence, and prevent future deaths. To his shock, however, he finds the latest house, supposedly uninhabited, occupied by Courtney (Shannyn Sossamon of Wristcutters: A Love Story [2006 / trailer]) and her two sons — who are on the run from their well-connected, abusive husband/father, Clint (Lea Coco)… 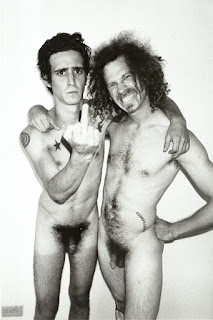 The movie mildly questions whether evil and/or corruption lies in the person or is a learned characteristic and, also, like Children of the Corn (1984 / trailer; 2009 remake / trailer), proves that cornfields are sites of horror. A lot more emphasis is put on the realistic 8mm home "snuff films" of the past murders than in the first film, and they are as creative as they are unsettling and/or horrific — eventually, however, one cannot help but wonder why the demon Bughuul places such importance on "creative" killings instead of just simple murder using, say, knives or guns or even a handy stone.

For all the repulsiveness of the snuff films, the whole movie itself is seldom truly scary and, despite a game cast giving it their all, seems oddly listless and predictable. It doesn't help that Sinister II plays so freely with the tropes of the first film, resulting in a movie that comes across somewhat as if an existing horror filmscript was quickly retooled as a sequel. Nothing special, in other words, but good for a rainy day or undemanding souls.

Trailer to
Sinister II:
The semi-open ending leaves the possibility of a third film, which doesn't yet seem to be in the cards… dare we pitch an idea? How about Bughull ❤ Annabelle? 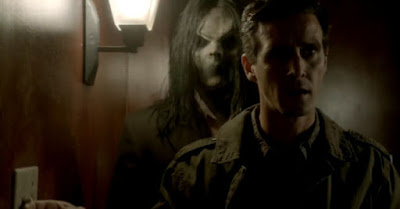