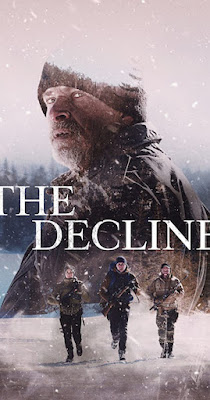 Not too far into this movie, one of the characters remarks that "In order to live, you have to survive." Perhaps that is a reason we here at a wasted life have never been all that survivalist-minded — or, to use more contemporary vocabulary, prepper-oriented: as far as we can tell, too many people are already just surviving (but barely), and not living. The concept of suddenly having to work even harder to survive as our bodies rot away due to nuclear fallout, or everyone reverts to cannibalism due to a shortage of food, or we slowly puke our insides out due to flesh-rotting bacteria, or simply lose our glasses in a situation in which new ones are as impossible to attain as having toothache taken care of, getting a decent glass of wine, or treating an old-fashioned case of the clap or hemorrhoids, appeals to us about as much as having kids. (In other words: nada.) Life is meant to be lived, and surviving ain't living. And if you can't live, why survive? (Of course, we have the luxury of saying that from a continent where, amidst the current "corona crisis", if we want toilet paper and fresh eggs or vegetables or milk or coffee, we just have to walk three short blocks to the nearest store, where they give away free facemasks — unlike our sister who, living in "god's chosen country", can't get anything.* She's started her vegetable garden on her patio because she's frightened; we, on the other, have started planting stuff between our citrus trees because we've got the space and time and lockdown needs variety.)
* Now, since the day we wrote this review some weeks ago, she can get almost everything again, but the streets are burning. Oddly enough, her medical-necessity smoke gets delivered with a regularity that truly deserves the description of "neither snow nor rain nor heat nor gloom of night stays these couriers from the swift completion of their appointed rounds".
But, whatever. The Decline is a French Canadian movie about preppers, one which you can watch in English, if you don't mind too much that the lips onscreen don't always move correctly to words said. A thriller, it never truly ascends it Netfux TV roots and is often rather predictable, but for that it is well-shot and offers enough suspense to keep you interested. 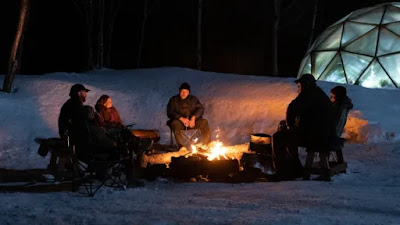 The Decline opens with a family suddenly gathering their shit together and disappearing into the night, as if the film that should follow will be one of preppers in the decline of society. But the movie quickly pulls the rug out of that expectation, revealing instead that the family of three is merely conducting a dry run similar, you might say, to the fire drills we used to do in school and the shooter-on-campus drills school kids do now. The scene not only introduces us to the main white male character of identification, but also serves to point out something that should be obvious: all kinds of people are preppers, including young yuppie couples with kids — and single women who like canning, hot mixed-race chicks suffering guilt more than war-induced post-traumatic syndrome, overweight guys that probably mistake their real abilities for those of their avatars in their favorite computer game, over-strung jerks just one step away from snapping, and mildly overweight piano players. (Generically black people, less likely — possibly because they're too busy trying not to be accidentally killed by the local cops and/or stand-your-ground idiot[s].) Basically, anyone dominated by a fear of social/societal collapse, a fear that has been around probably as long as society has, is a viable prepper. In turn, being a prepper in itself doesn't make a person the bad guy — and, initially, no one in the movie is a "bad guy". Some are merely more likable than others. 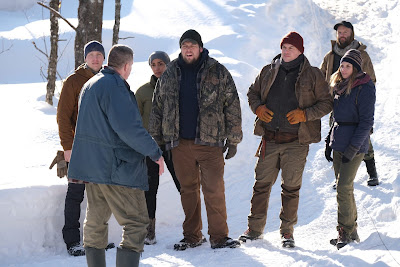 And that is one of the strongest points of The Decline: it doesn't really point fingers — it is only after the shit hits the fan that anyone truly becomes "the bad guy(s)" or the "hero(es)". And even then, there are probably those out there that would even see the actions of the "bad guys" as justified, or at least of the actions of Alain (Réal Bossé). He merely wants to save that which is his, that which he has built up — and society is going to collapse, after all (eventually). That said, however, even if no one in this movie starts out as an obvious villain, the fact that the shit is bound to hit the fan hangs in the air like a Damocles sword from the moment Antione (Guillaume Laurin) parks his car amidst the snowy landscape and hands over his smartphone. And it is when the shit hits the fan that the chaff is separated from the wheat: there are those who still turn to the society they expect to collapse, and those who want to keep their off-the-grid safety for that unavoidable, if date-unknown, disaster they know is to come one day. 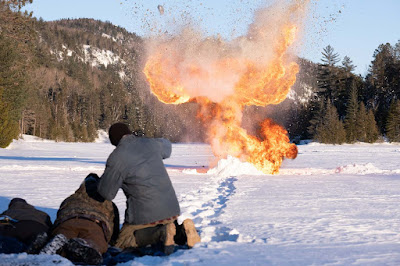 All that subsequently happens in The Decline after Antione arrives to Alain's survivalist training, possibly excluding the mid-film Psycho-inspired change of character focus, is predictable to say the least, but it is the very predictability of the train of events that keeps the movie so grounded in reality — excluding, we would argue, the unrealistic river scene that truly bonds Antione and Rachel (Marie-Evelyne Lessard), the latter the kind of totally hot and capable survivalist woman that any and all man or woman would want by their side when the world as we know it finally, truly, succumbs to a zombie virus.

Hardly a masterpiece, The Decline remains highly watchable, and as a feature-length film debut, it also indicates promise regarding the director, Patrice Laliberté. There are worse Netfux movies out there to watch on a corona-induced lockdown evening at home — like 6 Underground (2020), which we've chosen to forget we ever saw. (Tyler Perry's car wreck of a movie, A Fall from Grace [2020], on the other hand, is so unbelievably unprofessional and bad on every level that it achieves a transcendentally Ed Woodian intensity. That, in turn makes the movie immensely enjoyable, if you like your films as bad as we tend to.)
Posted by Abraham at 6:27:00 PM