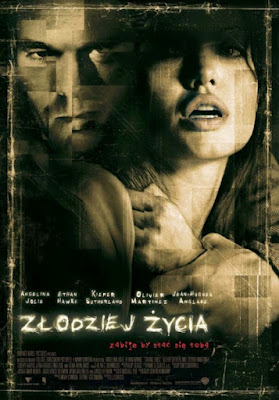 A dankly stylish thriller that quickly loses all its logic along the way and then descends into total (but always explained!) implausibility by the end, at which point, if you get down to it, FBI agent Ileana (pre-skeletal Angela Jolie) commits much less self-defense than she does long-premeditated (as in six or more months premeditated) murder. As Jolie obviously did not, despite whatever name success gained from Lara Croft: Tomb Raider (2001 / trailer) and Lara Croft Tomb Raider: The Cradle of Life (2005 / trailer), have the power to demand a no-nudity contract, a high point for star-nudity fans is her darkly shot sex scene with Ethan Hawk — conducted amidst grisly crime-scene photos — in which one gets fleeting shots of her original, pre-genetic-tested-and-then-replaced breasts. (But not of Hawke's weenie, of course, for seeing weenie means the world will end.) That sex scene, and Philip Glass's somewhat tonally atypical score (he didn't do the main theme, obviously enough) are perhaps the best things found in this speedily paced string of edgy killer-film clichés populated with the scenes and jump scares expected of this kind of undemanding flick, along with one totally unnecessary scene of a pissed-off hothead cop, Paquette (Olivier Martinez of the what-were-they-thinking western Bullfighter [2000 / full film]), punching Ileana.
Trailer to
Taking Lives:
Based on a novel by Michael Pye, Taking Lives concerns a serial killer who takes over the lives and identities of the people he kills (every other year) and the FBI agent, Ileana, who gets called to Montreal by Inspector Leclair (the always watchable Tcheky Karyo of Gravedancers [2006]) to help catch the killer because, well, Canadian cops are incompetent or something. (Not that Ileana seems all the bright of a lightbulb, either. Sure, she seems bright lying in a grave and making clever deductions, but she only figures out the murderer's OM by accident and from there on in she calls one false card after the other.) Taking Lives opens promisingly enough with an interesting and unexpected double murder, but once the film forwards to the present day and grand dame Gene Rowland (of The Skeleton Key [2005 / trailer]) shows up claiming to have seen her dead psycho son on the ferry, Taking Lives may stay watchable but logic and proportion fall sloppy dead. It is her sighting of her long-lost son, and possibly his desire to rid himself of his (red-herring) "business colleague" Hart (Kiefer Sutherland of Dark City [1998] and Mirrors [2008]), that theoretically (probably?) set the killer off to execute his big, typically convoluted plan and all the subsequent murders in Montreal. 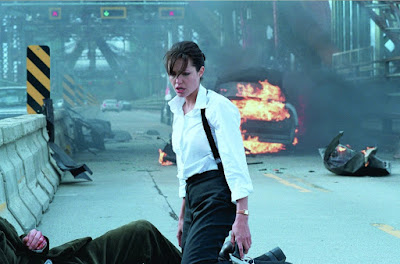 Among other irrealities, the movie features a wonderfully laughable characterization of a gallerist and what they do that reveals a general ignorance of gallery work — but then, much of what transpires in this movies shows a general lack of interest in reflecting the plausible and the real. Nice cinematography, though, and good editing as well, not to mention that notably tonal-dark Philip Glass soundtrack. But, as way too often, if one wants to enjoy the Taking Lives as suspense thriller, one really shouldn't question the whys or what-the-fucks of the narrative. Definitely NOT a flick that one must see.