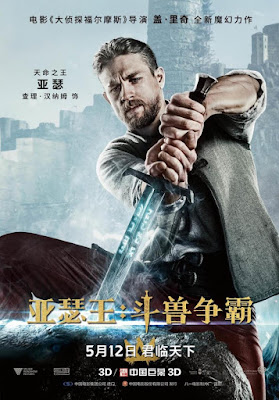 Guy Ritchie, one of England's best contemporary auteur director's of entertainingly hip, pop crime cinema (see Lock, Stock and Two Smoking Barrels [1998 / trailer], Snatch [2000 / trailer], Revolver [2005 / trailer], and RocknRolla [2008 / trailer]) obviously hoped to mimic the success of his Sherlock Holmes mini-franchise — see: Sherlock Holmes (2009 / trailer) and Sherlock Holmes: A Game of Shadows (2011 / trailer), both great films — with this special effects extravaganza, a "prequel" of sorts to the story of King Author. The result is his worst movie since the psychotronic disaster that is Swept Away (2002 / trailer), a massive misfire that is less a Ritchie movie than another Madonna-sized misstep, just without his ex-wife around this time.

Unlike Swept Away, this monster and demon-heavy re-envisioning of the (pre)legend of King Arthur is heavy on all Ritchie's stylistic touches and well-made, but it drowns in CGI excesses and (just like in Swept Away) a total lack of interesting or likable [lead] characters. A major cinematic miscarriage in every way, it is hardly surprising that this totally berserk and bombastic but oddly boring movie bombed. Jude Law is the bad guy, Vortigern, who sacrifices everything he loves to evil demons so as to usurp the thrown from Arthur's dad (Eric Brana) and remain in power. Like all evil kings in flick's like this one, despite totally having the chance, he doesn't simply kill Arthur (Charlie Hunnam of Crimson Peak [2015 / trailer]) when the good lad shows up as an adult and pulls Excalibur from the stone and, instead, allows the lad to escape and thus enables the movie to meander pointlessly onward. 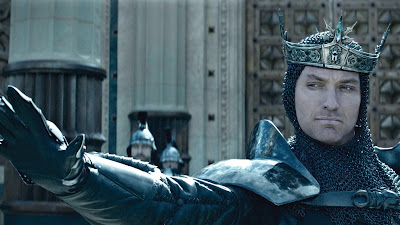 King Arthur: The Legend of the Sword is a ridiculous and ultimately unmemorable special-effects extravaganza that resolves itself as predictably as expected while always conveying the sense that it is still in search of a story, all the while screaming obnoxiously: "I'm a new franchise!" Not.
Posted by Abraham at 7:00:00 AM