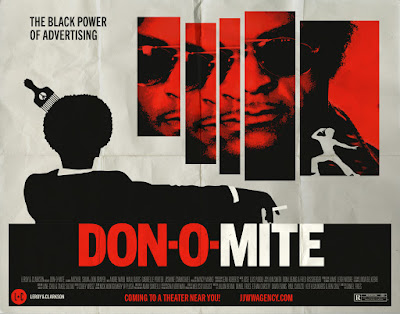 We cannot claim to be fans of Mad Men (2007 to 2015), if only because we never caught an episode. We saw a trailer or two, but while they may have looked interesting, and Jon Hamm hunky, prior to the current COVID lockdown we were never really all that much into series — other than for the two hilariously great and likewise dearly departed series, SciFi's Z Nation (2014-18 / trailer) and AMC's Preacher (2016-19 / trailer).
But had this faux trailer we stumbled on recently while working on our upcoming 3-part Babes of Yesteryear focus on Marilyn Joi been for the real thing, we probably would have found the time to at least chest out an episode or two. This thing is great! Hits the groove, has the moves, but with a production level seldom found in the real thing. Hell, despite it all Afro American cast, it was even made by a bunch of lily-white men — how much more like the real thing can you get?
To simply quote director Daniel Frees's own words found at his website: "Mad Men has been part of the new golden age of television and was coming to an end with a 7th and final season. As fans of the show, we knew the storyline was hitting the late 60s early 70s; the same era of films like Shaft (1971 / trailer), Foxy Brown (1974 / trailer), Putney Swope (1969 / one-liners) and of course Dolemite (1975 / trailer). So we re-imagined Mad Men through the lens of the blaxploitation genre and Don-O-Mite was born. We were able to do a lot with a small budget, an amazing cast, and a level of detail for wardrobe and set design worthy of an original AMC show."
Interestingly enough, Don-O-Mite is also a real advertisement, as Slate points out: "The trailer is an ad for an ad agency, Leroy & Clarkson, but that's probably the reason it works so well: The writing is clever and knows its blaxploitation roots, while the performances, costumes, and set designs are impeccable. It's hard not to find the agency a little endearing when they create something as dyn-o-mite as this." (So, just out of curiosity: How many non-white folks work at L&C?)
Posted by Abraham at 6:04:00 AM