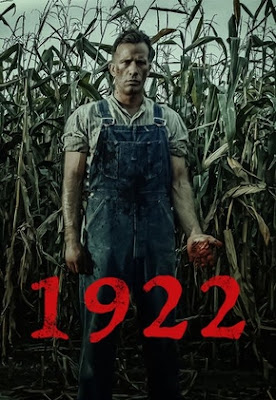 "I discovered something that night that most people never have to learn. Murder is sin. Murder is damnation. But murder is also work."
Wilfred James

Wow! Imagine that! A Stephen King movie that doesn't just not suck, but is even somewhat good. But 2017 seems to have been a good year for good King adaptations, as among the six adaptations made (two TV series, The Mist [trailer] & Mr Mercedes [trailer]; two feature films, The Dark Tower [trailer] & IT [trailer]; and two NETFUX films, Gerald's Game [trailer] and this flick), only two — The Dark Tower and The Mist — are seen as failures of varying degree. That said, we probably wouldn't have bothered with 1922 had we known it was a King adaptation… and thus missed a relatively good movie. 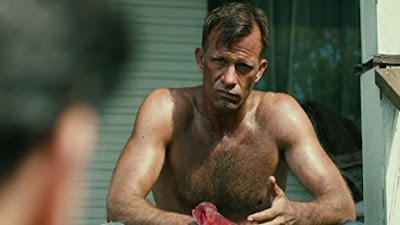 Based on a Stephen King novella of the same name, 1922 is much more a slow burn psychological crime-cum-drama with heavy shades of horror than a straight-out horror movie. In general, the entire feel and tone of the narrative and movie is closer to, say, Fyodor Dostoevsky's Crime and Punishment than any given revengeful ghost flick. Indeed, one could argue that any and all revengeful ghosts that appear in 1922 are less true unworldly apparitions than the guilt-fevered hallucinations of the movie's main protagonist, Wilfred James (an unrecognizable Thomas Jane in his third appearance, after the suck-ass Dreamcatcher [2003 / trailer] and excellent The Mist [2007 / trailer], in a Stephan King movie). True, the rats are physical and real — at least the ones that eat the dead body or attack the innocent cows' udders or chomp on Wilfred's hand are — but the ghosts, as creepy and realistically presented as they might be and despite the closing line of the movie, straddle a fine line between yes-they-are and no-they-aren't real… the final decision, we would argue, lies squarely in the viewpoint of the viewer. 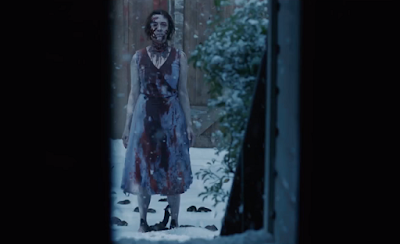 1922 is set in rural Nebraska, a decade before the Great Depression and the Dust Bowl joined forces to wipe out the independent small farmer. Wilfred James is one such independent and proud farmer, though not too simple to read American Classics of ages gone by — who out there has read George Eliot's Silas Marner or Nathaniel Hawthorne's  House of the Seven Gables instead of just the Cliff Notes? (Hell, who out there still reads books, much less the classics? Today's educated American seldom gets further than Twitter.) Both are books which, in their own narratives, echo such themes as guilt and retribution and reconciliation as found lacing 1922 (and, at least in the case of the last, Wilfred is doomed never to achieve).

But though he might read such books, Wilfred obviously does not learn from them. Married to Arlette (an always excellent Molly Parker), a woman he despises as much as she him, she finally sees a way to leave the hated farm and husband she got shackled to due to youthful horniness (use condoms, kids) when she inherits 100 acres from her father. Wilfred, in turn, covets her land and, when confronted with the possible loss of his son Henry (Dylan Schmid of Horns [2013 / trailer]) should she truly abscond, turns to murder to keep everything he so wants. 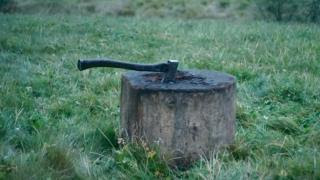 While the reason behind the murder is convincing enough, where the movie fails (but luckily doesn't collapse) is in Wilfred's involvement of his own son in the act: Henry's participation is as unbelievable as his supposed 14 years of age (the actor being and looking 18 years old). That a father might involve his son in killing is believable enough — see: Joseph Kallinger, the shoemaker — but the ease with which Henry is manipulated into helping to killing Arlette, his obviously loving mother, in 1922 is conducted with a speed and haste seldom seen even in real-life families where maternal abuse is a daily given. In Henry's case, it takes little more than his Dad's verbal argumentations, the threat of an unwanted move and loss of girlfriend, plus a drunken maternal warning about premarital pregnancy and a facial slap for being sassy to make him kill a woman that had, one feels due to a few photos and expressive glances, never shown anything but maternal love and care for him. Perhaps in the book, where the temporality passes at the rate of one's mind's eye instead of at a movie's running time (and the impressionability of youth is likewise not negated by the visual age), Henry's decision is more believable, but to believe it as it occurs within the film requires some suspension of belief. 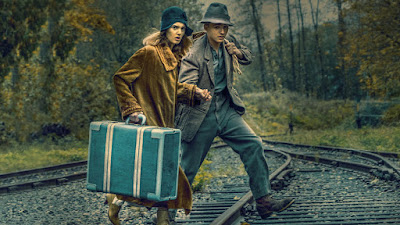 When the murder finally occurs, both Henry and his father learn, much like Prof. Michael Armstrong (Paul Newman) in Torn Curtain (1966 / trailer), that killing someone is no easy thing. It would seem, however, that even if you get away with it, living with your deed is even harder. (See, again: Crime & Punishment.) The two manage to continue like normal for the harvest, but come fall the slow rot of their souls overtakes them and life becomes one stumble after the other, forever deeper into damnation and loss. 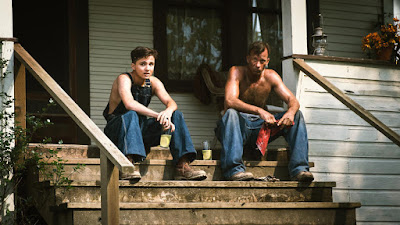 As much the movie fails in making Henry's participation believable, it succeeds elsewhere and remains engrossing to the end. The mise-en-scene rings true from the start to the end, with the slow decay of the farm doing well in reflecting the parallel emotional state of Wilfred. The acting is equally noteworthy: Molly Parker does a good job is presenting a woman stuck in and smothered by a life she never wanted, and her facial blankness as a blood-spattered ghost/hallucination is of far greater expressive effectiveness than any moaning and groaning and grimacing could ever have been. Dylan Schmid is, as mentioned, far too old for his role to be truly successful, but he remains a likable if not somewhat intellectually dim presence whose fate, like that of his pretty girlfriend Shannon Cotterie (Kaitlyn Bernard), is both tragic and inevitable. Even tertiary and quaternary roles like Wilfred's neighbor (and Shannon's father) Harlan Cotterie (Neal McDonough of Star Trek: First Contact [1996 / trailer and Ravenous [1999 / trailer]) and/or the town sheriff Jones (Brian d'Arcy James) achieve a believability that belies both the limited amount of time they are on screen and the banality of their well-worn figures. 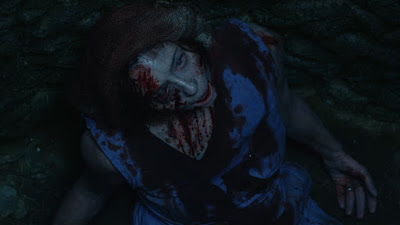 And as Wilfred, Thomas Jane excels: unrecognizable and convincing, both in accent and in presence, he proves himself to be a much better actor than in any of his prior film projects we've seen him in, with the possible exception of his turn as a hot-headed asshole cop in the mis-set Under Suspicion (2000 / trailer https://www.youtube.com/watch?v=gyPkbZ_kmEg). In 1922, he proves himself a man who, should he choose to follow that path, could well come to excel as a character actor far beyond the on-and-off success he's had as a semi-name, occasional lead actor. 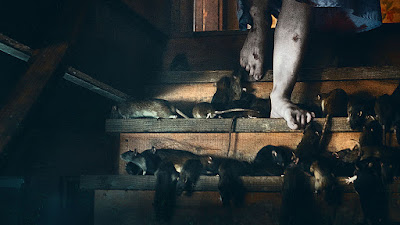 In any event, if you're in the mood for a period-set, non-trashy, well-made and well-acted movie with excellent production design, you won't do too badly by watching 1922. We watched it simply because it looked like the best option of all the movies our trash-hating, female significant other — in a fit of NETFUX-offer overdose — was flipping through. It turned out to be a movie that, for a change, we both enjoyed… something that generally only occurs when we watch kiddy or animated films.