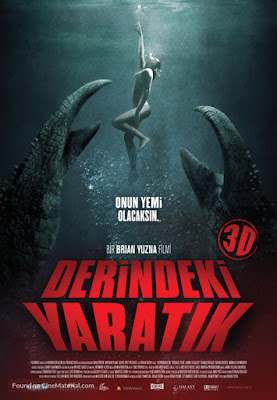 Five years after the less than notable Spanish horror movie Beneath Still Waters (2005), Brian Yuzna dusted off his pen, checkbook, megaphone and folding chair to write, produce and direct a less than truly notable Dutch-Asian horror movie that is, at least, both less of a fiasco and more enjoyable than the turkey preceding it. The biggest flaws are, as always in Yuzna's case, not directorially based: in all his movies, Yuzna generally has a good eye and knows how to use the camera in a way that keeps the action flowing, the tension present, and the viewer interested. No, as normal, the flaws are in the narrative itself, which, as seems common for him at this stage of his career, is less than optimal. Likewise, once again the overall lack of thespian ability of many of the people onscreen is sorely visible.

At the core of its exotically located heart, Amphibious is basically an old-fashioned monster movie with exotic, extra trimmings — "creature feature fusion", so to speak. Were someone like Eugène Lourié (8 April 1903 – 26 May 1991) or Jack Arnold (14 Oct 1916 – 17 March 1992) to rise from their grave(s) today to make a full-color, CGI-heavy, somewhat gory, 3-D monster movie in Asia, it might look something like Amphibious. So if you have a penchant for monster movies along the lines of Arnold's Tarantula (1955 / trailer) or Lourié's Beast from 20,000 Fathoms (1953 / trailer), you might find yourself mildly enjoying this movie despite yourself. It is stupid, it is clumsy, it is almost predictable, but it is also oddly charming and watchable, even as it often induces you to laugh at places where you shouldn't. And the ending is sort of a gross, unexpected kick in the gut, which is definitely a plus point. 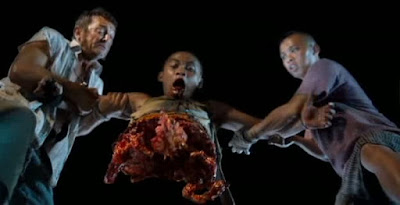 In its broadest sense, Amphibious is about an unbelievable and hot biologist* with the cutest of European accents, Dr. Skyler Shane (Janna Fassaert), who hires the crusty American boatman, Jack Bowman (Michael Paré), to boat around some Indonesian waters looking for something and who ends up getting involved with a deadly gang of smugglers based on a mid-water fishing platform as well as a deadly underwater monster when she tries to save an enslaved child named Tamal (Monica Sayangbati of Pulau hantu aka Ghost Island [2007 / trailer] and Mati Suri aka Comatose [2009 / trailer]). A lot more happens, of course, but the bare-bones plot just given is basically what drives all the death and gore and suspense of the movie — all of which is given desperately needed support by the exotic location.
* How hot and how unbelievable is Dr. Shane? Well, the only less-believable scientist to hit the silver screen is, probably, the not-half-as-hot Dr. Christmas Jones (Denise Richards) of the 1999 James Bond movie, The World Is Not Enough (trailer).

Released in the Netherlands in 2010, Amphibious disappeared more quickly than a dissatisfied one-night stand. Today, it is easily available on DVD, but maybe you should save the money. Heralded as the first 3-D Dutch production, the movie looks less like it was shot in 3-D than subsequently converted from 2-D, and while more than enough shots play with the 3-D depth of vision — a toilet death, a scene in which Skyler sort of freaks out during a religious ceremony on the street, and the final scene all come immediately to mind — the overall quality of the 3-D is primitive and eye-straining enough that one is warned to go for the 2-D version. We, for one, would seriously say that but for the freak-out scene, the 3-D effects brought nada to the movie. 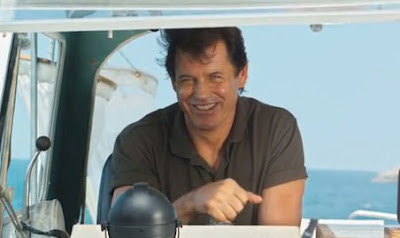 In regard to the acting, as mentioned it is generally pretty abysmal. Michael Paré (of Bloodrayne: The Third Reich [2011], Ninja Cheerleaders [2008], Bad Moon [1996] and Village of the Damned [1995] and so much more) is a shining example of true thespian talent in comparison to the rest of the cast, and his character-appropriate sun tan is probably the best indicator of what in all probability made this movie project attractive to him — aside from the paycheck, that is. (Who can say "No" to a paid vacation?) The problem with Jack, the figure Paré plays, however, is that the figure's actual character is inconsistent: he veers from self-centered to heroic to self-sacrificing at such speed that one could well believe he has multiple personalities. Worse — although good for a fit of laughter — at one point, the story has such little use for him that it literally leaves him stranded on a floating boat with a dead engine watching all the action on the fishing platform from afar. 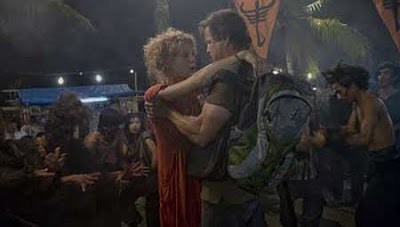 Once the movie goes into action mode, Janna Fassaert is never as convincing as her accent is endearing, which only becomes odd if you bother to watch her showreel, which indicates that she can act. But attractive she is, so she is always at least pleasant to watch — though it is with deep regret that while she does have a penchant for short shorts comparable to those of Dr. Christmas Jones, she also leaves her clothes on throughout the movie, never even getting down to something as innocuous a one-piece bathing suit. 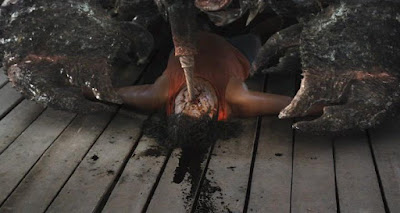 That said, Amphibious does open with a pre-narrative interlude of a typical, backpacking party-tourist couple, Julie (Elke Salverda) and Logan (Timo Ottevanger), which ends in death and gore soon after a quick flash of Julie topless. And while such scenes are generally appreciated, in the case of Amphibious it seriously seems tacked on, as if the conscious decision was made to shoot a scene that could be added in countries that don't object to female nudity in movies. And while the interlude is precariously interwoven into the narrative, and obviously involves the same killer creature, it really has nothing to do with rest of the movie. (But in this day and age, maybe we shouldn't complain.) 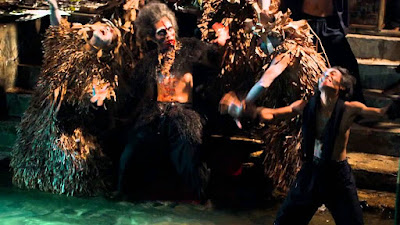 As mentioned, Amphibious is a creature movie, and the creature of the movie — Eugène Lourié waves from the grave, here — is nothing less than a giant prehistoric undersea monster. And though one might initially scoff (if not burst out laughing) at the concept, much less sight, of a huge water-inhabiting scorpion, a creature we now know as tiny and living on land, the real primordial "scorpion" of yesteryear did indeed live in water, where it sat at the top of the food chain for millions of years. (An estimated 27 million, actually — a lot longer than mankind will ever survive. Hell, we'll be lucky if we survive the Trump administration.) Of course, the real prehistoric scorpion looked nothing like the killer critter of Amphibious, but does that really matter all that much? Is Robert Gordon's It Came from beneath the Sea [1955 / trailer] any less fun just because Ray Harryhausen's octopus has six arms instead of eight? 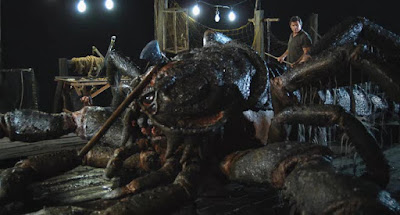 Though hardly a big step, Amphibious is nevertheless a noticeable step up from Yuzna's last directorial effort. It is entirely acceptable in a creature feature kind of way: a passable full color update of the B&W prehistoric monster flicks that the older generations used to catch on the local TV channels after school. The movie may not set its sights high or be all that demanding, but in regards to what it aspires to do and be, Amphibious manages to be better and more interesting than the average SyFy underwater and/or prehistoric monster cheapy — but then, is that really difficult to do? 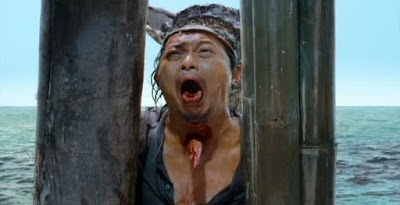 But all truth told, if you're an old school monster-on-the-loose film fan, we would recommend you check out Tremors (1990) before this baby here. True, by now that flick is old enough to almost be old school, but it really works way better than Amphibious. As does Splinter (2007), for that matter, despite the minuscule size of its deadly critters. 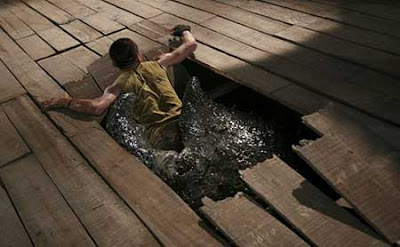 Amphibious is, in the end, good for a rainy day at best — and even then, only when it doesn't cost any dinero to watch. 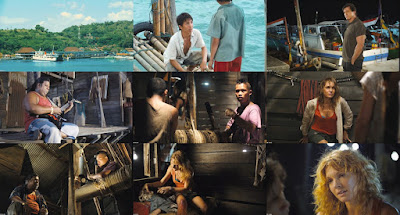