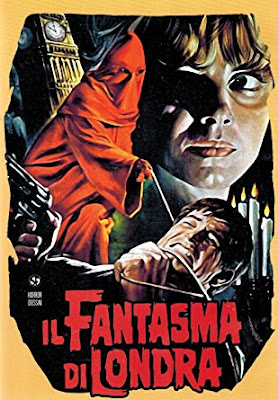 German Trailer:
Aka: The College Girl Murders & The Prussic Factor. (Spoilers — but skip the first paragraph plot description and you skip the spoilers.) 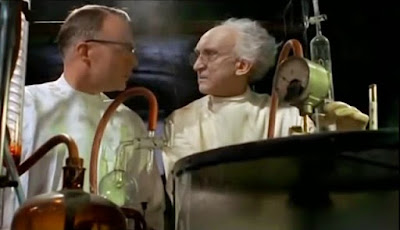 Der Mönch mit der Peitsche opens with two chemists inventing a deadly gas that seemingly only kills those who immediately and directly inhale it (so if you're to the left or right, chill). Chemist one kills chemist two with the gas and, when delivering his invention to the contractor, is in turn killed by a hooded, whip-bearing monk. (Karma's a bitch.) Mr. Mysterious Contractor then arranges for jailed cons to escape for a day to kill various girls of a boarding school near London with the gas, the first time using a specially built Bible which releases the gas into the face of the innocent girl during mass, the remaining times with a rather bulky spray gun. (Oddly enough, while the Bible actually released a gas, the spray gun seemingly spurts masses of liquid, easily a hundred times the amount of poison used in the first two murders.) Inspector Higgins (Joachim Fuchsberger) and Sir John (Siegfried Schürenberg of The Avenger [1960], The Inn on the River [1962], The Indian Scarf [1963] and The Hand of Power [1968]) investigate, but are unable to stop further murders. The victims soon include various teachers, the writer Mark Denver (Harry Riebauer), and a few other unimportant people; some die by gas, a few get shot, some get their neck broken by the well-aimed whip of the hooded monk. While Sir John is busy ogling girls and trying to solve the crime from a "psychological aspect", the clues Higgins follows convinces him that the young, soon-to-inherit-a-lot-of-money Ann Portland (Uschi Glas, who also had a small part in Der unheimliche Mönch [1965 / trailer]) is also in line to be killed. A dead con, a machinegun-bearing chauffer, and a kidnapped damsel in distress later, Ann Portland survives to inherit, secret identities get unmasked, and the bad guys mostly die… 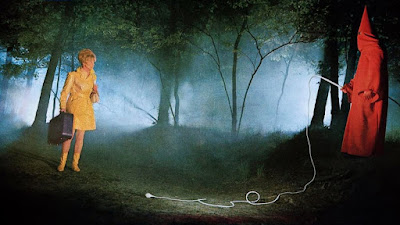 Der Mönch mit der Peitsch is the forth film based on its original source, a play entitled The Terror, which Edgar Wallace transcribed into the novel form in 1929, a year after director Roy del Ruth made the first pre-code film version of the "gothic" thriller in 1928. Like the written versions, that movie was entitled The Terror, and, according to Denis Gifford's Pictorial History of Horror Movies, del Ruth's film, the second full-length talkie ever made, is also the first sound horror film ever made.* (Too bad it's a lost film.) A commercial success — and, according to Gifford, an artistic one, too — del Ruth's version of The Terror inspired two eventual remakes: Howard Bretherton's criminal comedy The Return of the Terror (1934), a sequel of sorts starring Mary Astor and Lyle Talbot (and featuring J. Carroll Naish), and the far more serious (and true to its source) British production directed by Richard Bird four years later, again entitled simply The Terror (full movie). 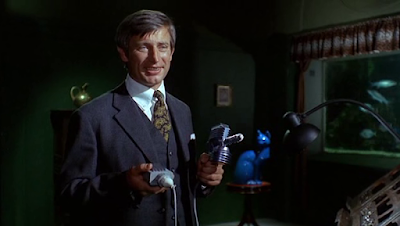 * Elsewhere, it is merely claimed to be the second talkie released by Warner Bros & the first talkie horror…. By the nature of its plot, that would also make it the first talkie body-count flick. 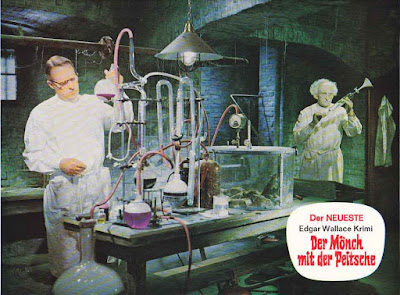 Twenty-seven years later, producer Horst Wendlandt had his scriptwriters create a new, more than slightly altered version of the story for his final black-and-white Wallace film production, Der unheimliche Mönch aka The Sinister Monk (1965 / trailer). Excellently directed with creativity and professionalism by Harald Reinl [8 July 1908 – 9 Oct 1986] and starring his wife, the beautiful Karin Dor [22 Feb 1938 – 6 Nov 2017]** (in her last appearance in a Rialto Wallace film), the earlier B&W version was an artistic and critical success, so it is hardly surprising — though definitely saddening — that Wendlandt chose to let the basic premise be regurgitated a second time in color two years later as the creative air began to go out of the Rialto series. But in all truth, even the stalest of the Rialto Wallaces, especially those still made in Germany,*** are always enjoyable in their own madcap, totally psychotronic way. The same can be said of this off-the-wall movie here. 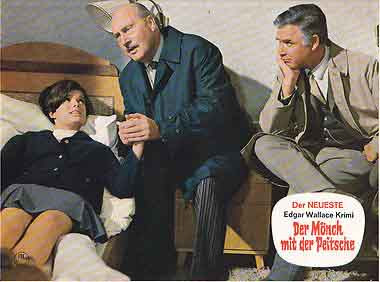 ** He should have stayed married to her: "In 1986, in his Tenerife retirement home, he was stabbed to death by Daniela Maria Delis, his alcoholic [second] wife and a former actress from Czechoslovakia."
*** The final movies of the series, made as Italian co-productions, are better enjoyed as tacky giallo than tacky Rialto Wallaces, but almost all will leave you wanting more. 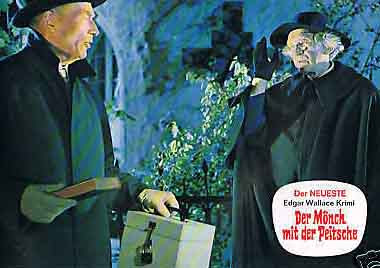 The 1967 color version of The Terror, nee Der unheimliche Mönch, was renamed Der Mönch mit der Peitsche and made and released between the two more enjoyable Rialto Wallaces, Die blaue Hand (1967 / trailer) and Der Hund von Blackwood Castle (1967 / trailer), both of which were also directed by Alfred Vohrer and written by Herbert Reinicker. Der Mönch mit der Peitsche is really not only not as good the two other Rialto productions from 1967, but it is also not just a luridly colored, third-rate rehash of the far more artistically satisfying B&W version. In fact, even if, as a whole, Vohrer's version of the story begins to display the trademark laziness and slap-dash quality of his later, often almost unbearable cinematic mistakes, the general tackiness and campiness makes the ridiculous flick fun. By now, Vohrer was well on his way to his "mature" burlesque style that he took to the extremes in the utterly ridiculous but funny Der Gorilla von Soho (1968 / trailer) and the generally less satisfying and intermittently funny Der Mann mit dem Glasauge (1968 / trailer), which has perhaps one of the worst endings of all the German Wallace movies. 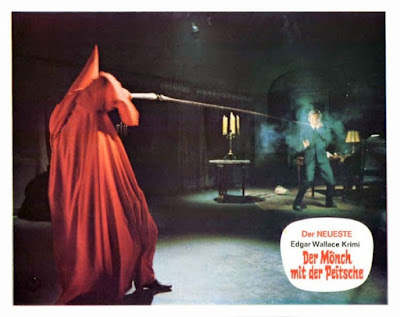 The saving graces that make Der Mönch mit der Peitsche enjoyable as a bad movie are easy to list: the neo-Pop color scheme, the totally idiotic story, the occasionally scurrile visuals, and the bat-shit crazy narrative are total weirdsville. If you always thought the only thing Batman: The Movie (1966 / trailer) needed to be a good movie was dead nubiles and skin and more second-rate James Bond interiors, then you'll like Der Mönch mit der Peitsche. 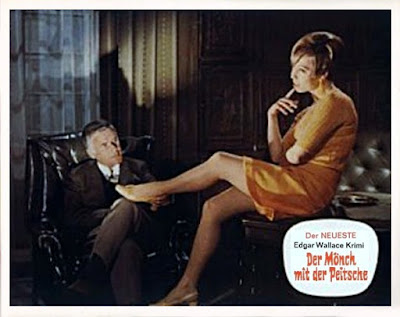 Among the enjoyable highpoints of the movie's saving graces: the whip-bearing monk dressed completely in red does indeed look cool, the general carnal attitudes the men display towards the young girls of the boarding school is oddly perverse (and totally un-PC by contemporary standards), the swimming pool with a below surface viewing window is hilarious, the candlelit villain's lair full of huge fish tanks complete with sea turtles and big fish is impressive, and Martin  Böttcher's score is noteworthy as being one of his best. 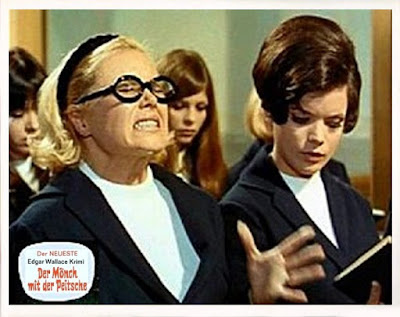 Nevertheless, by this time director Vorher was one of the busiest directors around (between 1966 and 1969, he averaged roughly 2.5 feature films a year), so the direction, while occasionally flashy, looks rushed and a bit lazy. This does its damage, and almost stops the exceptionally illogical and unbelievable from transcending its faults, despite some excellent casting. In the end, however, age has been kind to the movie, as all that which is now outdated adds a whole new layer of fun. Der Mönch mit der Peitsche makes for excellent viewing with the kiddies or when stoned or on other mind-altering substances. 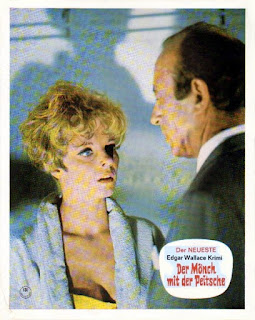 Much like the substantially better Im Banne des Unheimlichen aka The Hand of Power (1968), this movie is often seriously on another planet, one called Goofy Prime, and thus can be enjoyed as a total piece of inanely colored and coiffured pop trash. If you know nothing about German Wallace films, have never seen one before, but are a fan of luridly colored kitsch 60s Eurotrash, this baby will surely give you a hard on (or, as the case may be, make you wet). 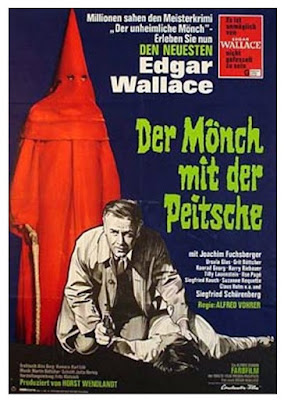 On the other hand, if you tend to the more gothic, horror-tinged Wallace flicks or German krimis, keep your distance from Der Mönch mit der Peitsche.
Posted by Abraham at 8:05:00 PM