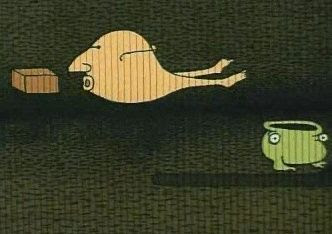 Directed by Ivan Maksimov. This month's Short Film is located smack dab in the middle of "WTF Land" — as in: "WTF does that mean?"
Left to Right, aka Sleva Napravo (Russian: Слева направо) is a student film, the first animated film made by Russian animator Ivan Leonidovich Maximov (born 19 November 1958). The music is by the Polish electronic music artist Marek Bilinski and, according to the imdb, four authors — Bakir Dzhusupbekov, K. Konirkulzhaev, Dzhamshed Mansurov and Maksimov — wrote the Bolero-like non-narrative of the "dreadful visions of a hungry puppy" [MUBI]. Over at Print Mag they have a rather terse interview in which Maximov says the short is "a sketch of transformation and vanity". The vanity we do not see, the transformation, yes: the short is basically a plotless continuity of growth, metamorphosis and pooping that arguable belies Maksimov's own assertion that he doesn't take drugs.

"Many people have no channel to their unconscious, so their
fantasy and imagination can work nice only with the help of drugs. They cannot realize that someone can be constructed otherwise."

In any event, we would say, like Wilf Shaw, that Left to Right is a "lovely little short, genuinely weird and [with] interesting visuals and very pleasingly rhythmic, though not much more to be said about it than that."
It is also not the weirdest short of the numerous short films Maksimov has made over the years, most of which can be viewed on his blog (click on his name above to get there). It is, however, the first of his films that we saw, and thus the one we choose to present. Enjoy!