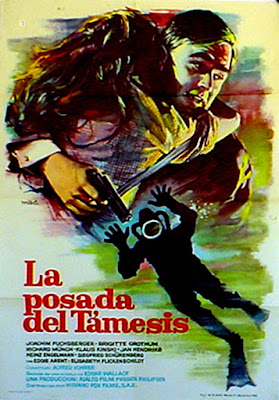 German Trailer:
(Spoilers!) The third Wallace film adaptation to be directed by director Alfred Vohrer for Rialto Films, Das Gasthaus an der Themse may have its flaws but it is not without reason that it is one of the more popular films of the series: it is both a worthy and enjoyable entry in the series — tacky, thrilling, funny, well-shot, fun. 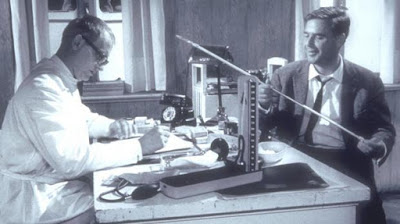 Based on Wallace's book The India Rubber Men, from 1929, it is the second movie to use that book as its basis: Maurice Elvey's 1938 film, The Return of the Frog, also took its plot from that book, although Elvey's movie itself was made as a sequel to the 1937 film The Frog, an adaptation of Wallace's novel The Fellowship of the Frog (a novel filmed three times under various titles — including as the first Rialto Wallace movie, Der Frosch mit der Maske [1969]). 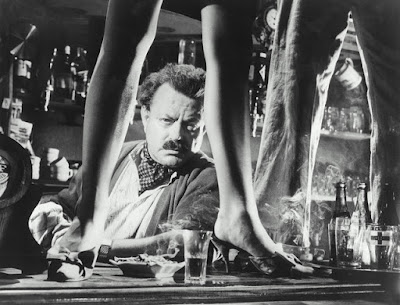 But enough history, let's get to the Rialto flick. One true pleasure of Das Gasthaus an der Themse, like so many of the Rialto adaptations, is the music: scored by Martin Bottcher, the opening song, complete with sounds of a cuckoo clock, dogs barking, and yells is undoubtedly one of the more entertaining soundtracks to come out of Germany/Europe during a generation specializing in incredibly strange (soundtrack) music. With this film, Bottcher easily holds his own alongside even the best that Peter Thomas ever had to offer. Bottcher, who still works today scoring for television from his homes in Sardinia and Lugano, is also the man behind one of Germany's most familiar and loved melodies: the theme song to the Winnetou films.

The first scene of Das Gasthaus an der Themse (above) is wonderfully typical of an Edgar Wallace film of the 1960s. It is a dark and foggy night, and lone man paddles his boat down the river Thames. From the viewpoint of someone standing on a bridge, we see the boat glide underneath one side and then out the other, the seated man suddenly looking rather like a dressed window puppet. Flllitzzsch!! The puppet gets a harpoon in its back, the puppet is suddenly a man again who lets out a scream of pain before collapsing, the music blares, and the credits roll. A film can hardly begin any better... 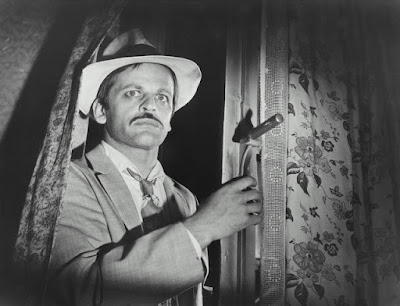 A killer called the Shark is not only loose on the Thames, but when he isn't busy harpooning people, he also masterminds a series of spectacular jewel robberies. Inspector Wade (Joachim Fuchsberger) is sure that the Shark has something to do with a riverside dive named Mekka, run by the whiskey-smuggling, smoothly corrupt Nelly Oaks (Elisabeth Flickenschildt), who likes to entertain her guests by singing songs about how everything fun and nasty happens at night. (When she isn't singing to them, the noticeably interracial group likes to drink whiskey, start knife fights, and do the twist.) Is she the Shark? Or is it the sleazy Russian guest Gregor Gubanow (Klaus Kinski), who seems to spy on everyone. And how does Nelly's young and oddly uncorrupted ward Leila Smith (Brigitte Grothum of Die seltsame Gräfin [1961 / trailer] and Der rote Rausch [1962 / trailer]) fit in the picture? 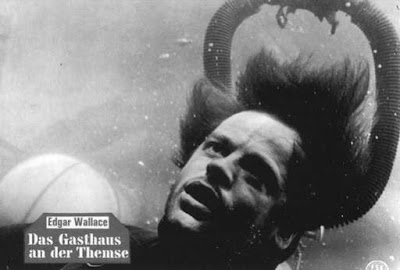 A number of implausible and unexpected plot twists later — after various double identities get sorted out, a few red herrings get smoked out, and the proper number of people have died — not only is the Shark finally revealed, the damsel in distress rescued and all crimes solved, but one of the biggest inheritances of England also gets saved at the same time. 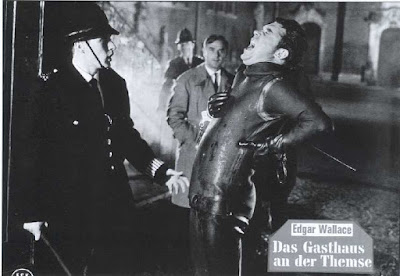 Oh, yeah: and Joachim Fuchsberger gets the girl.

From the movie — Elisabeth Flickenschild sings
Was in der Welt passiert:
Jan Hendricks, whose career didn't die with the hilarious Flitterwochen in der Hölle (1960) and atrocious Der Insel der Amazonen (1960), makes his third appearance in a Wallace film as a partner of Nelly who eventually also gets a harpoon in his back. (Hendricks died much more slowly in real life of AIDS in 1991.) As always, Eddie Arent (as Barnaby) is there to supply both some out-of-place humor and a valuable clue, while Siegfried Schürenberg (as Sir John) pops into the picture occasionally to lend his undivided support to his man Wade. Less common to a Wallace film, however, is the unexpected revelation at the death of Gregor that Klaus Kinski was actually playing a good guy. 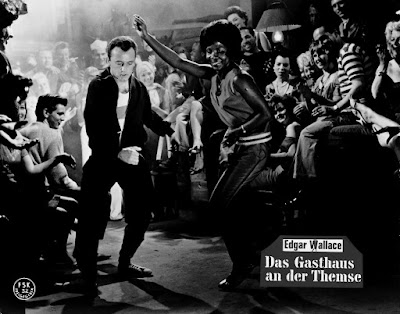 As with many a Wallace film, the acting in Das Gasthaus an der Themse is uneven, spanning from great to truly abysmal. Still, director Vohrer keeps the film paced nicely, and even manages to convincingly make the Hamburg harbor, standing in as London's river Themse, look like an eerie and dangerous waterfront. His occasional fantastically moody black and white cinematography as well as the excellent location shooting and set design definitely all go a long way towards making it easy to overlook the film's thespian flaws. The sound quality could be better, however. Some scenes sound as if they were recorded in a tin can, while in others the actors seem to be screaming at each other for no reason. 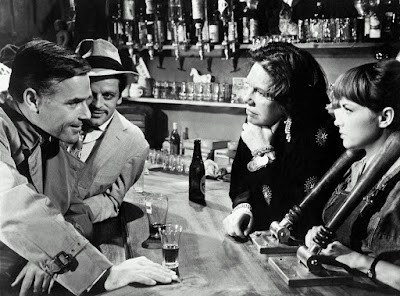 All in all, however, despite some small flaws Das Gasthaus an der Themse is definitely a worthy entry in the series and a good way to spend a rainy Sunday afternoon with the kids or by yourself, with or without a doob. 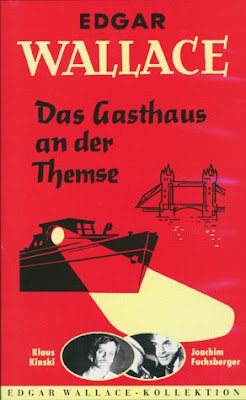