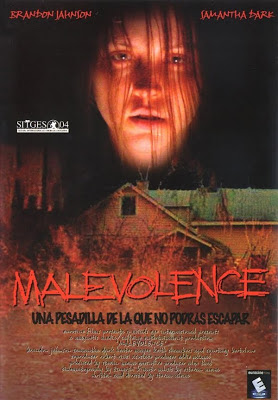 (Spoilers.) Here's a flick that surprised us. The second flick on a two-movie DVD package, neither of which we knew anything about when the DVD fell into our hands, we ended up watching Malevolence years after the flick on the first side, Mustang Sally's Horror House (2006), primarily because Mustang Sally's sucked syphilic donkey dick to such a large extent that we figured this flick couldn't be much better. How wrong we were.

Not that Malevolence is a masterpiece, as it isn't: it suffers from some questionable acting, some odd and/or unbelievable behavior on the part of certain characters, and occasionally overly forced if not primitive narrative streamlining. But those are all common flaws found in many a film, including those with big budgets, which this film did not have. We're talking low budget independent horror here, and it is a sign of how good the movie truly is that Malevolence has such flaws but remains both a solid ride and also keeps the viewer interested.

Not that one expects it to do so when the flick starts: the pre-credit sequence doesn't promise much, and at the latest the slow, handheld, and over-lit "nighttime" travelling shot to the doorway of a house as loud, canned thunder peals in the background, one begins to feel that another truly bad film has been popped into the DVD player. But this intro, which comes almost across almost as an ironic (if unintentional) statement on the stereotypical tropes of horror movie opening scenes — "It was a dark and stormy night" — soon moves on to the quiet, well-framed, and at times aesthetically pleasing if almost sad landscapes of the opening credits, and they do wonders to build the viewer's hope. They reveal that the director obviously has a good eye — and, for the most part, he keeps it throughout the rest of the movie. The basic plot, once the stereotypical slasher intro is over, is that of a bank robbery gone wrong and the surviving robbers meeting at a predetermined, deserted house somewhere in the countryside of Pennsylvania. (Here, unlike in Dead Birds [2004], which despite its historical setting also begins with a robbery gone wrong before moving into supernatural horror, Mena actually manages to keep viewer sympathy with at least one character.) As fate would have it — and arbitrary fate plays a major role in much of what happens in this movie — a mysterious, seemingly unstoppable killer happens to be housing close by.

OK, let's bitch about the obvious: the killer never stays dead and, no matter how often he reappears, no one ever shoots or stabs or knocks him over the head with a baseball bat a second or third time, much less long enough to ensure that he really will never get up again. Are people really that stupid and lazy? Seriously: the film comes from a country where cops shoot black people for sport and citizens shoot foreigners for knocking on their doors or other foreign-looking citizens over parking-space disputes, and we're expected to believe that someone who's just barely survived hell won't/doesn't make sure a killer is dead when all it would take is two or three more seconds? (Isn't there a Zombieland [2009 / trailer] rule pertaining to this?) 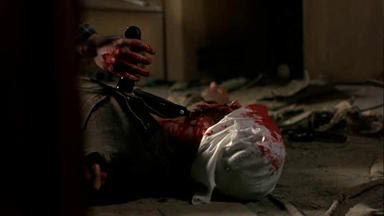 And let's not forget about the momma, Samantha Harrison (Samantha Dark), who over the course of the film is kidnapped, along with her young softball-playing daughter Courtney (Courtney Bertolone) by a bank robber on the run (Richard Glover of Sightseers [2012 / trailer] and A Field in England [2013 / trailer]). Her pudgy daughter has managed to free herself from the same bonds she's tied with (gaffer tape), and is out on the run from an armed robber, and all momma does is fall asleep — not just once, but twice? Hallo? Steven Mena reveals a substantial lack of understanding for the maternal instinct here, if not a total disregard of reality. But then, more than once, as is normal for a slasher, the characters don't exactly react or act like the average Joe and, instead, suffer screenplay-convenience syndrome. (The most extreme example of which is when the good-guy robber Julian [R. Brandon Johnson of Fabled (2002 / trailer) and Little Erin Merryweather (2003 / trailer)], much like the Samuel L. Jackson character in The Long Kiss Goodnight [1996 / trailer], doesn't stay dead despite obviously being killed. Unlike the faceless killer, however, he doesn't do that more than once.) 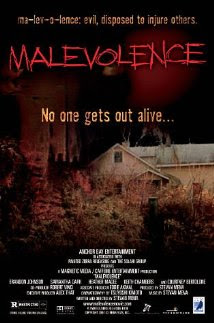 But all the bitching aside, Malevolence does work. It intrigues, it enthrals, it scares, it thrills, and it makes your root for some and hate others — and best of all, it keeps you so involved that most of the flaws only come to mind after the movie is over. (Allah knows that there are enough professional filmmakers out there who have years of experience behind them and huge budgets at hand but can't do that.) So, even with the flaws, the film remains commendable: for all its echoes of the generic body counter, it manages to become more than just that. We can't help but feel that had Albert Camus been a low budget trash filmmaker instead of an intellectual and highly successful author, he probably would've made films like this one.
Posted by Abraham at 9:32:00 AM