A good film, long or short, generally succeeds on many levels: technically, emotionally, visually. On occasion, usually a rare one, commercial advertisements manage to succeed at these levels to such an extent that they literally transcend the product they're selling.
Unlike movies, however, which get released on DVD and TV and VoD or whatever new form of exploitation that arises, even the best and most popular advertisements are more or less doomed to eventual oblivion. Possibly fondly remembered by a few, but almost never seen again.
Over at Sound Identity, they speak of the nineties as "the golden age of jeans," claiming that in the nineties "denim brands had global influence and their advertising campaigns were a concentrate of brand values and creativity. Jeans were a status symbol, your chosen brand and model sent out a clear message about you, your interests and the icons that inspired you."
Maybe, but then as before and as now we wore 501s. Which is maybe also one of the reasons why some of our favorite, fondly remembered ads of that last decade of the 20th century are those for Levi's — with Brad Pitt's being one of the least memorable (despite the fact that both he and the unknown babe were three-way material). 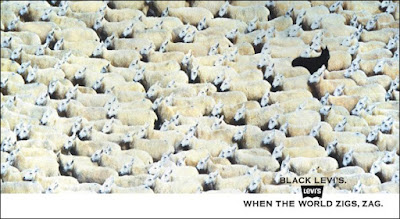 Of the many Levi's adverts we caught pre-movie at the cinemas back then, two have remained forever ingrained in our head for transcending their function as an advertisement to become enjoyable, memorable "short films": The Creek and Mr Bombastic. Both were from the global advertising agency of BBH Bartle Bogle Hegarty, whose first job was (according to some sources) Levi's advertisement above. (BBH and Levi's worked together a total of 28 years, until 2010, when the firms parted company.)
The Creek, from 1994, supposedly also counts among the favs of BBH's very own Sir John Hegerty. It was directed by Vaughn Arnell & Anthea Benton, and uses the song Inside by Stiltskin which, if we are to believe Wikipedia, "was written by Peter Lawlor for the British […] advert Creek"; it has proven to be thei group's only Number One hit ever. The commercial itself has the feeling of a pastoral western shot by Ansel Adams.

Even more successful on every level was the Levi's advertisement BBH made the next year entitled Mr Bombastic, a wonderful stop-motion spot that has humor, sex, adventure, total coolness and yitloads of irony all set to the soon-to-be pop classic by Shaggy (aka Orville Burrell), Bombastic.
The first animated Levi's spot ever, Mr Bombastic was directed by Deiniol Morris and Michael Mort, who went on to create the memorable if underappreciated British series of thirteen 5-minute shorts Gogs! (1995 / episode 1) which, in a convoluted manner, went on to [definitely not] inspire the Dreamworks movie The Croods (2013 / trailer). Michael Mort's feature film directorial debut, the stop-motion Chuck Steal: Night of the Trampires (trailer), a follow-up to his 15-minute short Raging Balls of Steel Justice (2013 / fullshort), is due to be released this year.