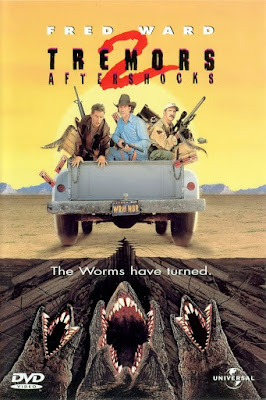 Way back in 1990, Kevin Bacon, deep in a career slump at the tender of age of 30, bemoaned the fact that he was "doing a movie about underground worms!" Bacon's career eventually revived itself — thanks, in part, by taking the Shelley Winters approach and moving into character parts — and that movie about underground worms, Tremors (1990 / trailer), went on to become a cult classic (despite its initial less than spectacular box office success). 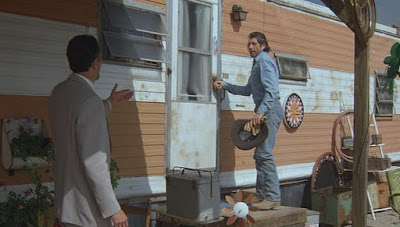 Today, Tremors is one of those ageless movies that even still works on every level. A modernized version of the typical Jack Arnold monster movie, but with way more humor, the cast, acting, and direction and story are all dead on. It is a movie worth watching, and one that many people (like us) are always happy to watch again. 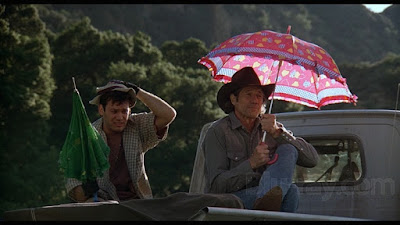 It is probably the slow-cook success of the movie that resulted in the six-year span between the Tremors and Tremors II: Aftershocks, the first of four direct-to-video/DVD franchise flicks, a short-lived TV series of  13 episodes in 2003, and yet another direct-to-DVD sequel due next year (not to mention a TV series reboot being developed for Kevin Bacon). Six years isn't much, however, in comparison to the 21 years it's taken us to get around to watching the first sequel. Was the wait worth it? Well, we've seen worse, we've seen better. (Were we a teacher, and the flick a term paper, we'd give it a solid "C".) 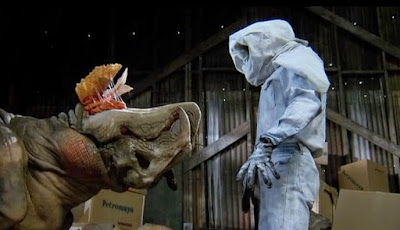 For whatever reason, Kevin Bacon didn't return for Aftershocks, but the always likable Fred Ward did. Direction was taken over by S.S. Wilson, who co-wrote the script to the first movie and this one with his regular collaborator Brent Maddock. Basically, they took the original story from Tremors and tweaked it a little and made Tremors II: Aftershocks, adding only one truly original idea: evolution. Thus, the underground "Grabiods" beget the "Screamers" — they, in turn, go on to beget "AssBlasters" in Tremors III: Back to Perfection (2001 / trailer), but we won't get into that.

Whereas the ending of Tremors infers that that the three core characters — Valentine McKee (Bacon), Earl Bass (Ward) and Rhonda LeBeck (Finn Carter of Sweet Justice [1992 / trailer]) — ride off to fame and fortune, by Aftershocks bad contracts and bad investments have brought down-on-his-luck Earl back to Nowheresville, struggling to make a living from ostriches. (Valentine, on the other hand was busy filming, dunno, Apollo 13 [1996 / trailer] or maybe Murder in the First [1996 / trailer].) 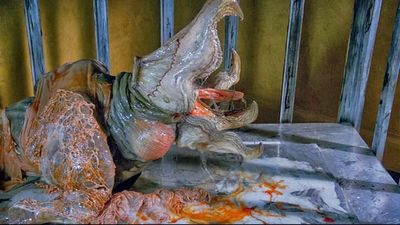 As luck would have it, Petromaya, an oil firm down in Mexico, is having its own difficulties with the carnivorous Grabiods, and through the power of money ($50,000 for each dead Graboid) they convince Earl to go down across the border and solve their problem. 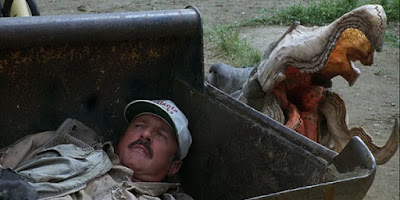 Through the kind of contrivances scriptwriters think up when they need a specific character, Earl ends up partnering with Grady Hoover (Chris Gartin of Friends and Family [2001 / trailer]), a man of similar intellect and character as Valentine (imagine if Valentine had been a city slicker instead of a country bumpkin). Along the way, a romantic interest is introduced — this time around for Earl — in the form of geologist Kate 'White' Reilly (Helen Shaver of Amityville Horror [1979 / trailer], The Believers [1987 / trailer] and The Craft [1996 / trailer]), and then Perfection's survivalist Burt Gummer (Michael Gross of all the sequels) joins the show. And then: evolution. 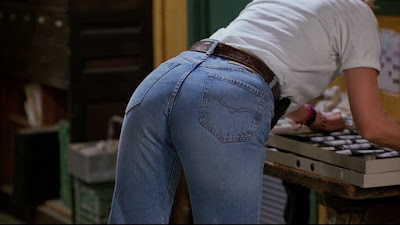 OK, the dialogue is funny and the characters likable if barely sketched or clichéd, but the whole movie comes across pretty much like a weak second brewing of the same teabag of your favorite tea: it echoes all that you loved in the first brewing, but it just doesn't cut the mustard. And that is the problem of Aftershocks: we have seen it all before, not only that but done better, so it fails in general to interest even though it is professionally made. If you have seen Tremors, Aftershock just comes across as completely unnecessary, if not a bit dull and uninteresting. In turn, it well made enough that if you have never seen Tremors, and you can get past the jokes (visual and spoken) that build upon the first movie, Aftershock will probably mildly entertain the child within you. 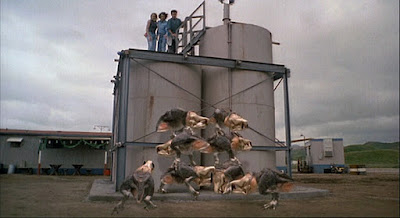 Also, the bodycount is surprisingly low for a horror movie, comedic or not. In Tremors, about nine or ten people (of varied nationalities) went to meet their merry maker in ways funny to tragic, while in Aftershock the death toll is a measly three men, all of whom are Mexican. (Do we detect a certain level of subconscious racism here?) For the life of us, we couldn't figure out why the screenwriters didn't at least do away Grady, who for all intents and purposes is an expendable character. Hell, he doesn't even return for Tremors III or V: Bloodlines (2015 / trailer). (As Tremors IV: The Legend Begins [2004 / trailer] is a prequel, it at least makes sense that he's not there.) 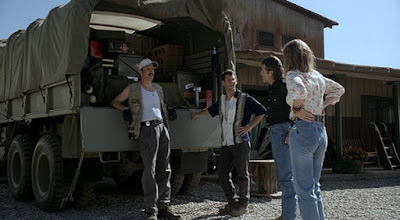 As for the titular monsters, most of the killings of the Graboids & Co. are reduced to scenes of flying guts and debris, which always seems to land just where the main characters are located and nowhere else, or CGI effects instead of any amazing old-school special effects, so there ain't much thrill there either. 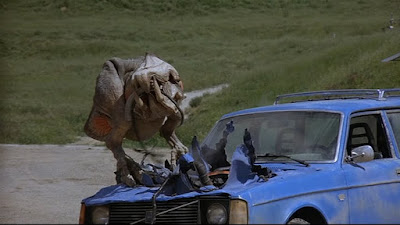 Tremors II: Aftermath is like virtually any major American beer: it leaves no aftertaste, but has no punch even as it seems oh-so-fondly familiar. As a movie, it is not terrible, but not great: it's a faded, less-colorful rehash of the first film that sits smack-dab in the middle of perfunctory. But at least it has laughs: laughs go a long way, baby.
Posted by Abraham at 6:37:00 PM