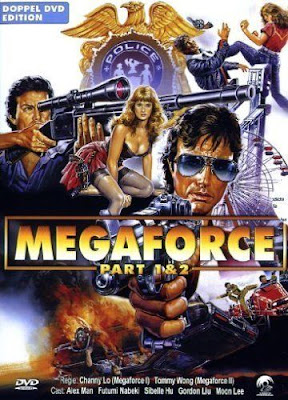 This flick is the first of two on a cheap, German double DVD entitled Megaforce 1 & 2, which we bought alone due to the wonderful cover art: with its big-boobed white babe with Farrah Fawcett hair (could it be Ronda Jo Petty?) and macho male Caucasians bearing big guns, we imagined something trashy along the lines of Juan Piquer Simón's Dirty War  (1984). (Indeed, the cover art of both DVDs seems to be from the same talented illustrator, whoever that might be.) 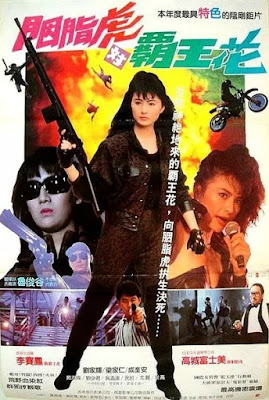 Little did we suspect that the seriously whitewashed cover art totally obliterates the fact that the two films, Megaforce 1 & 2, are actually from Hong Kong and at least the first film more or less features an entirely Asian cast. (The "more or less" are two minor Caucasoid bad guys who show up briefly, one played by Mark Houghton, seen below, who is also to be found somewhere in Knock Off [1998 / trailer] and Fight to Win [1987 / German trailer], among other films.) Not that that matters, as a bad Hong Kong flick is more often than not as good as or better than a bad Spanish one. 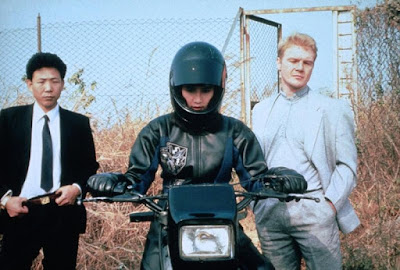 Pop Megaforce 1 in the DVD player, and suddenly a title card informs you that the movie is actually called Urban Force 1. Later, should one decide to do a little research on the web about the movie, one learns that neither title is the "real" title, and that the movie is actually Sha shou tian shi, aka Killer Angels — and Megaforce 1 and Urban Force 1 are later, possible bootleg titles. (My god! Ebay sells bootlegs!) And finally, one discovers a trailer (embedded far above) revealing that the film even has an English dub out there somewhere. The dialogue doesn't seem any better than in the German dub, though. 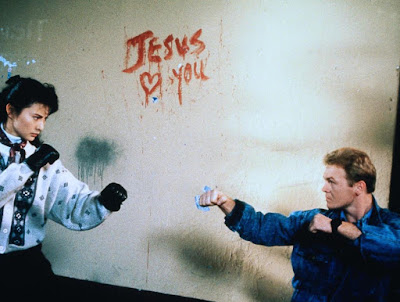 In any event, under any title, it must be said, the movie is a truly fun discovery, and definitely whets the appetite for Megaforce II one day, though it is doubtful that the latter is in any way a "real" sequel. 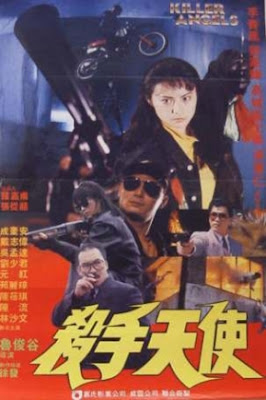 But then, sequel, prequel, schmequel: who knows where Killer Angels itself actually stands. Killer Angels is merely one of a mass of interchangeably titled "angel" movies that poured out from Hong Kong in the late 80s and early 90s, a series of girls-with-guns flicks the exact order and titles of which is possibly known to no one for sure. But all, if one is to accept what James Ursini & Dominique Mainon say when talking of the beautiful Moon Lee in their entertaining read, The Modern Amazons: Warrior Women On-Screen, are modeled after the TV series Charlie's Angels (1976-81 / trailer) — though one might argue the true roots go all the way back to Ted V. Mikels's The Doll Squad (1973 / trailer), with the iconic Tura Satana), where the women kicked ass way better than the angels of TV, even if the directorial and acting skills don't surpass Saturday morning kids drama level. 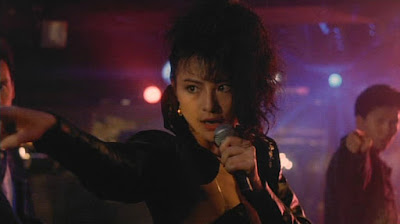 Moon Lee, by the way, is one of the three ass-kicking women of this film, Killer Angels, and undeniably the lead. According to Ursini & Mainon, she initially gained notice in the first and classic Mr. Vampire (1985 / trailer) — definitely a movie worth seeing — but only gained true Hong Kong fame with "her watershed film Angel (1987 / trailer?) and its sequels. In the Angel films, she played a character named after herself: Moon [...]. Although Moon's character looked deceptively innocent, she could be tough and vicious in a fight, even utilizing the traditional male weapon of nunchakus." 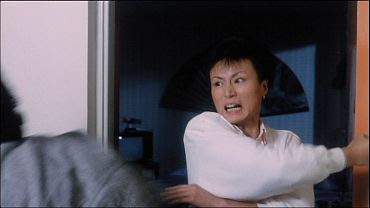 Here, in this German release of a probably typical Angel film, she is  neither called Moon nor does she use any nunchucks, but she and her fellow angels definitely kick, chop, shoot, and kill as well if not better than any man. (Sock it to them, baby!) And all the while not only do they have to fend off the sexist statements and behavior of the men around them, but their prime 80s outfits stay clean and their makeup doesn't smear, even after being thrown up in the air by nearby explosives. (Had they only shot a scene in nighties! Oh, wait. Was that sexist?) 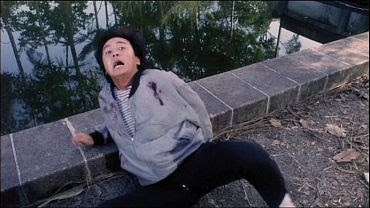 Speaking of outfits, look at the accessories: Why do none of the eyeglasses worn by any of the women, including their team leader (Pui-Kei Chan of Tai tin hang do: Sat hing / Brother of Darkness [1994 / full film] and Hei hai ba wang hua / Brave Young Girls [1990 / fight scene]), have any lenses? Was hip once upon a time to wear glasses without lenses? Could be: after all, those ugly-as-sin, baggy, above-the-belly-button jeans that gave everyone big, ugly, misshapen butts — male show dancers included — were hip once, too. Beanies, on the other hand, can never be cool enough. They always look charming, as they make any woman look like a brainless, harmless, sweetheart — even as she machineguns men dead left and right, or shoots some bad-ass, leather-clad hitwoman (Nadeki Fujimi aka Takajo Fujimi of Crystal Hunter [1991 / trailer]) in the back. 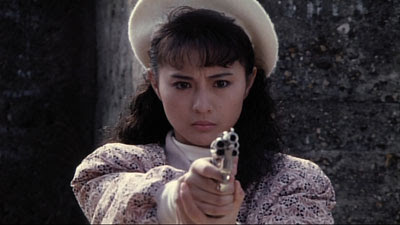 The plot is a string of clichés, but little time is given to the viewer to consider the logic of the events. As put together by longtime Hong Kong scribe On Szeto, whose unsung career seems to have spanned from 1954 to 1992 — he wrote, among others, fun stuff like  Mo / The Boxer's Omen (1983 / trailer), Gu / Bewitched (1981 / trailer), Che dau che / Hex vs. Witchcraft (1980 / trailer), Che yuen joi che / Hex after Hex (1982 / trailer), Du gu / Brutal Sorcery (1983 / full film), and more — Killer Angels / Megaforce 1 / Urban Force 1 is a string of familiar plot elements and scenes also found in any number of other movies. As uncreative as they might be, put together in such an excess and at such a speed, they work well and are immensely entertaining. Szeto seems very much to have written his script with the assumption that if you can't original, then at least be a fast barrage. A smart idea. 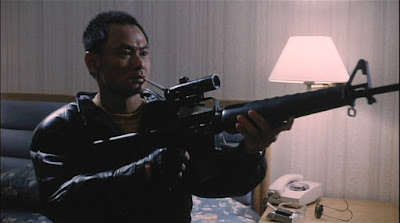 Killer Angel opens with a string of killings conducted by Michael, a hitman for the mob (played by the great Chia-Hui Liu, of too many movies to mention, including Kill Bill: Vol. 1 [2003 / trailer], Kill Bill: Vol. 2 [2004 / trailer] — you see him in both trailers — and the film that made his name, The 36th Chamber of Shaolin ([1978 / trailer below]). Soon thereafter, the gangster Chen shows up, supposedly with "a list of names" — the McGuffin of the movie — and in short order he is under the protection of the three angels. For whatever reason, Yau Li (Moon Lee) goes undercover at a local nightclub owned by the big bad guy of the movie, Godfather Chu Chung-Seng (Ka-Yan Leung of the Surreal masterpiece The Miracle Fighters [1982 / trailer], Jiang shi pa pa / Close Encounters of the Vampire [1986 / full movie],  Wui wan ye / Out of the Dark [1995 / trailer], Yong zhe wu ju / Dreadnaught [1981 / trailer], Yi tin to lung gei: Moh gaau gaau jue / Lord of the Wu Tang  [1993 / trailer], and Long fa wei  / Drunken Dragon [1985 / full film]). She does a music number and she and Michael get sort of romantic and there's a lot of shooting and fighting and a lot of people die and a white slavery ring gets busted and then the movie ends

The 36th Chamber of Shaolin (1978) —
original trailer:
Seriously, it is doubtful that there is ever more than a few minutes between any given action scene anywhere in the movie. True, the film looks oddly cheap around the edges, but still, Killer Angels barrels along like an out-of-control Fiat Palio with a Porsche engine. Between the violence and deaths and plot twists and laughs both intentional (like Yau Li's job audition) and unintentional (like Yau Li's job audition), one hardly has time to breathe. Killer Angels is simply good, stupid, fun stuff with good fight scenes and lots of bodies, including a few unexpected ones. One of the best fight scenes, interestingly enough, is the last one, especially since it looks like the man knows what he is doing but has often gone on the record that he knows absolutely no martial arts and merely imitates what the fight chorographers show him. Hats off to you, dude! 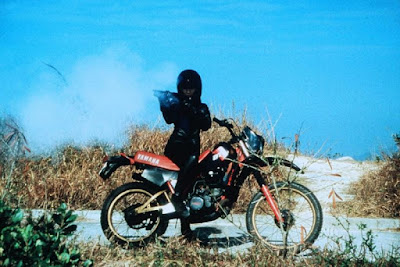 Director Chin-Ku Lu, who seems to have been around since the 70s as an actor, director and scriptwriter of Asian exploitation films — some films of note include The Holy Virgin vs. the Evil Dead (1991 / fights), The Death of Bruce Lee (1975 / trailer), and Wu lin sheng huo jin / Holy Flame of the Martial World (1983 / trailer) — isn't exactly the most creative of directors, but thanks to the speed of the narrative his occasionally haphazard direction is in no way a flaw. One occasionally wonders whether he or the editor is the true force behind the narrative, but whoever it is, Killer Angels works well as a truly entertaining if slightly cheap-looking piece of mindless, fully-dressed-girls-with-guns fun. Recommended.
Killer Angels (1989) —
Moon Lee killcount: