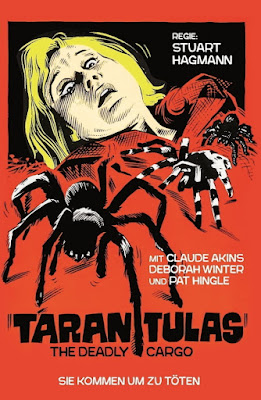 (Spoilers!) Needless to say, this movie has nothing in common with the indefinitely superior and far more entertaining science fiction classic, Tarantula! (1955 / trailer), a classic film that we here a wasted life recommend heartily. 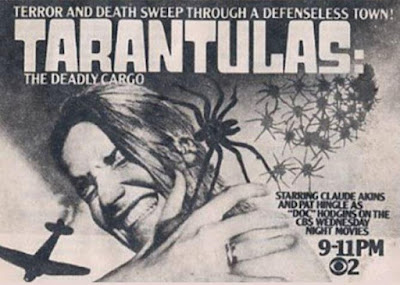 Nope, this flick is a mid-seventies, CBS, killer-critter television flick which, if it any way is indicative of director Stuart Hagmann's directorial capabilities, reveals a film director sorely missing directorial talent. But then, his lazy eye and mundane visual style is perhaps amplified by the grab-bag screenplay supplied by John Groves and Guerdon Trueblood ([3 Nov 1933 – 3 Mar 2021] scriptwriter/director of The Candy Snatchers [1973 / trailer]), which is padded beyond logic and offers no real thrills or chills or suspense, but does offer a lot of WTF moments, and that plays out a bit as if two different unfinished films were sewn together to make one feature-length slab of tediousness. For all that, the movie is at least populated by a nice amount of familiar faces known either from better films or from the hazy, lazy, rose-colored happy days of childhood (if you're old, that is). 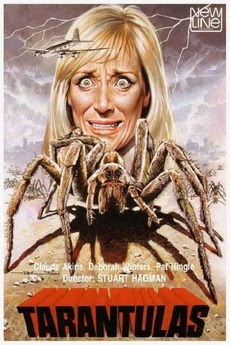 German trailer to
Tarantulas: The Deadly Cargo:
Like so many movies, the science (or, in this case, the zoology) of the movie is nowhere near the facts. Tarantulas are such a scary-looking arachnid that it relatively easy (and forgivable) that most people obviously do not know that their bite, while nasty, is not usually deadly for people. But then, this movie isn't even about tarantulas: mid-way through the narrative it is revealed that the spiders are actually Brazilian wandering spiders, or "banana spiders" — but somehow, even if those 8-legged critters are more poisonous than tarantulas in real life, the powers that be obviously (and probably rightly) did not think that Banana Spiders: The Deadly Cargo packs the punch needed to get an audience, as it sounds even less scary than, say, Camel Spiders (2012 / trailer).
Info on the Brazilian wandering spider
found at Cracked. 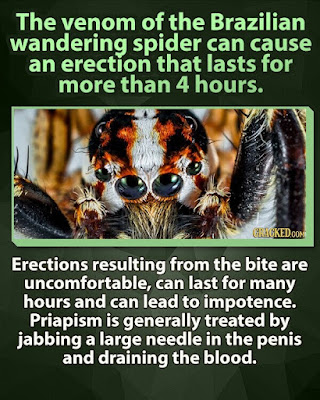 Much as in that equally stupid but far more entertaining Roger Corman-produced TV flick from 2012, the banana spiders of Banana Spiders: The Deadly Cargo seem to have an amazing ability to multiply rapidly: if, for the first half of the movie there are but a few dozen of the spiders, in the second half there are suddenly thousands. Unlike Roger's Jim Wynorski-directed film, however, in Banana Spiders: The Deadly Cargo the filmmakers obviously could not decide what the spider should look like because they indiscriminately use two distinctly different types of spider for different scenes: one reddish, striped and furry, the other blacker and skinnier. 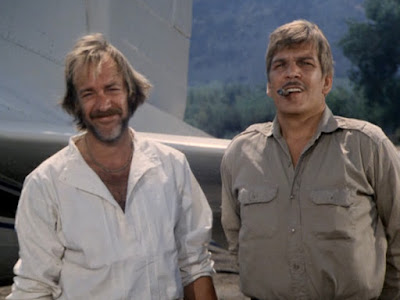 The first half of Banana Spiders: The Deadly Cargo plays out in the dangerous wilds of South America, where life is cheap. Two coffee smugglers, Fred (Howard Hesseman [27 Feb 1940 – 29 Jan 2022] of Tunnel Vision [1976] / full film) and Barney Buddy (cult actor Tom Atkins of My Bloody Valentine [2009], Night of the Creeps [1986], Maniac Cop [1988 / trailer] and so much more), buy a shipment of old coffee beans with which they plan to make a tidy turnover in San Francisco. This bit of the movie, despite the obvious presence of spiders that no one seems to notice, plays out a bit like a lame buddy-smugglers movie. Suddenly confronted by typical South American corruption (in the form of an unexpected export tax), the broke duo resort to some good ol' human smuggling to come up with the needed dough. 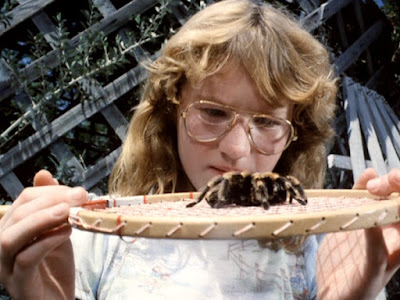 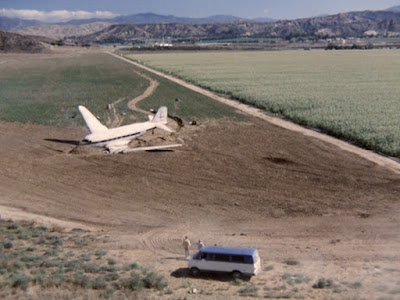 If you in any way were expecting either Fred or Barney Buddy to be the actual hero(es) of the movie, think again. Thanks to the banana spiders, Hesseman & Atkins could take their paycheck and hightail out of Finleyville. And thus starts the second short movie, which for the most part is often a lot funnier than the first part but, unluckily, due to its somewhat lengthier running time, is also a lot more tedious (especially the last part building up to the movie's ridiculous non-conclusion). Interestingly enough, though never mentioned, somewhere along the way the number of illegals obviously dropped from three to two, an intriguing aspect of the plot that is never pursued. Instead, as can be seen a mile away, the incompetent townspeople of Finleyville, U.S. of Anal salt-of-the-earth types one and all, inevitably set the plane afire and remain totally oblivious to the spiders. 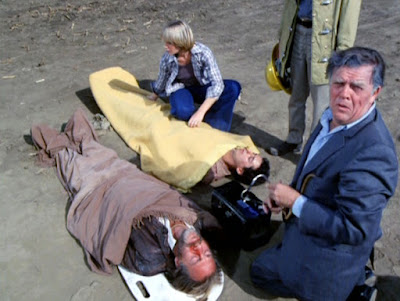 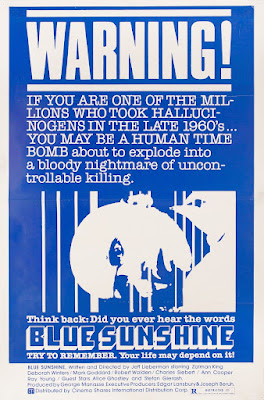 Trailer to a better film,
Blue Sunshine:
Banana Spiders: The Deadly Cargo is the type of movie which, at best, might appeal to the child within you or to kids still too young for the internet. The highpoints of the paltry narrative are generally the inane ones, like the previously mentioned lightening storm, the way the plane gets set afire, or the picnicking woman who thinks the spider crawling on her feet is her boyfriend tickling her. (A scene that would surely send Tarentino into paroxysms.) 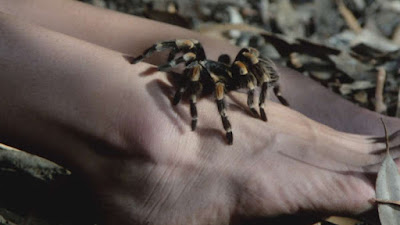 Any enjoyment had, however, is pretty much ruined during the movie's non-climax, an interminably long scene in which a select few enter the orange warehouse where all the thousands of spiders have gathered and literally shovel them, one at a time and in what seems like slow motion, into buckets of alcohol. Here, the filmmakers noticeably work under the false assumption that lethargy breeds suspense and not contempt. Throughout the entire film, one cannot help but notice that the budget (or maybe the ASPCA) didn't allow for any of the spiders to be killed, for not once does any character in the movie do the logical thing of stepping on or otherwise squashing the spider(s) in front of them, even when they are incapacitated by the amplified sound of buzzing bees. (A ridiculous plot point that serves to remind us that the filmmakers were not only not rocket scientists, but probably flunked out of high-school zoology.) 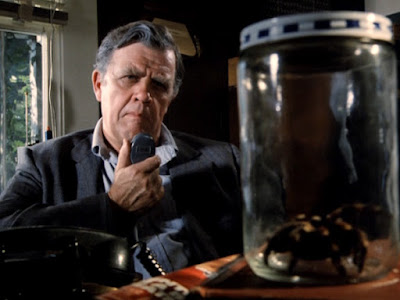 Banana Spiders: The Deadly Cargo is pretty much a worthless movie that offers little more than the occasional laugh and a lot of familiar faces. Unlike many movies, it becomes more enjoyable the more vocal the audience is: we watched it with six folks and had a fun evening, but had it been a solo experience, we probably would have fallen asleep... or possibly come to realize that sometimes life is indeed too short to waste it watching movies like this one. 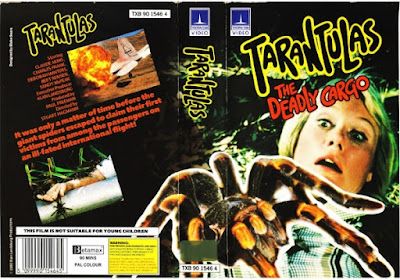