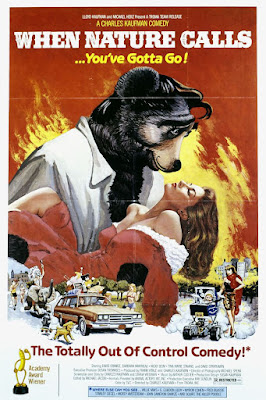 Okay, as normal with so many movies we watch, one is hard-placed to say that When Nature Calls is really any good — it's a Troma flick, for gawd's sake — but we would be lying if we didn't admit to really enjoying it. 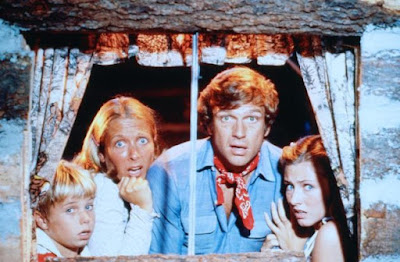 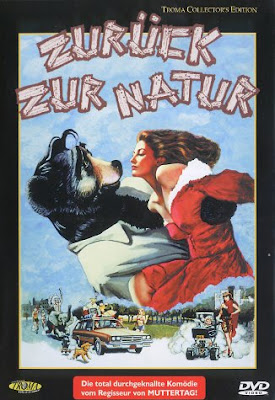 Trailer to
When Nature Calls:
Unlike most Troma films, When Nature Calls is a straight comedy; and even more unlike most Troma films, most of which are heavy on "gore grotesque" comedic aspects, the film is low on gore and blood-based laughs. There aren't any, actually. The humor of this extremely (and obviously) low budget film is bloodless, but for that pretty much all over the place. The most apparent influences to the film are such similarly throw-in-everything-and-something-will-stick comedies like Airplane (1980 / trailer) and Kentucky Fried Movie (1977 / trailer, see Uschi and Joi), with the latter being the most obvious influence. For one, When Nature Calls satirizes a filmic/TV staple (the family returning to the wilderness), and secondly, the movie is chocked full of cinema-related jokes (most of which are also the movie's funniest), including three faux-trailers to movies "Not Coming to a Cinema Near You" — Baby Bullets, Martin Snoreseasy's Raging Bullshit, and Gena's Story (featuring a young Gates "Dr Crusher" McFadden) — and a stop-motion intermission commercial that seriously outdoes the memorable high-point* of the classic 10-minute drive-in theatre trailer some of us might still remember.
* Which we, we might add, would hypothesize is the original inspiration for 2016's Sausage Party (trailer).
Not from
When Nature Calls:
Like both the previously mentioned comedies, When Nature Calls has its what-the-fuq cameos of unexpected faces — most notably, G. Gordon Liddy, Morey Amsterdam, Freddie Blassie and Willie Mays (who steps out of a corn [as in "maize"] field) — playing it straight. The biggest face to cause a double-take, however, isn't even a cameo: the movie features an early and lengthy appearance of future Oscar-nominee David Strathairn (of L.A. Confidential [1997 / trailer], Dolores Claiborne [1995 / trailer], Passion Fish [1992 / trailer], Fast Color [2018 / trailer] and so much more), in what is surely a role he never mentions in interviews: he plays the Indian brave Weejun of the Ka-o-pec-tate tribe, a character that is, by today's standards, as questionable as that of Loo (Evan K Kim) of the Kentucky Fried Movie segment, A Fist Full of Yen. (But then, as is the case with many movies of yesteryear, many of the jokes found in When Nature Calls, whether they stick or not, would never make to a film made today.)

Interestingly enough, even in a career stepping stone as minor as this film, in most scenes Strathairn usually still displays a cinematic presence that outshines everyone else in the movie (indeed, the only scene in which an actor displays more presence is a very short one in which the daughter Bambi [played by the unknown Tina Marie Staiano] appears in a bikini and steals all the attention for all of five seconds or so). In the end, Strathairn doesn't really have anything to be embarrassed about in what is probably his first film (shot in 1982, When Nature Calls was first released in 1984), even if comedy has never been his strongest specialty. 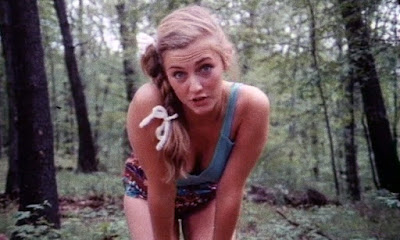 The main narrative of When Nature Calls, as already mentioned, satirizes the narrative cliché of the urban family returning to the wild, a thread common to movies as diverse as Swiss Family Robinson (1960 / trailer) and Mosquito Coast (1986 / trailer), neither of which entertained us as much as this slab of no-budget juvenilia. Here, Greg (David Orange of Video Vixens [1974 / trailer] and Rebel a.k.a. No Place to Hide [1973 / trailer]), the dissatisfied father of a typically American family living in Shanghai, 1913 — which looks and sounds suspiciously like New York circa 1985, even if Deep Throat (1972 / music, see Harry Reems) is seen on a background theater marquee at one point — decides it is time to escape big-city life and move to the boondocks with his family and dog. 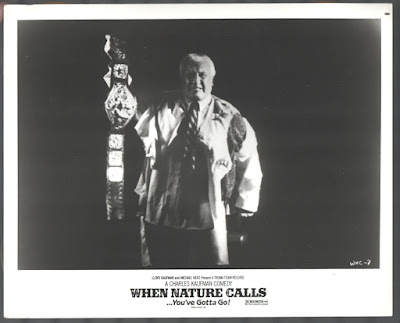 A thin plotline, perhaps, but a tried and proven one, and one that allows for a long, non-stop scattershot barrage of visual and verbal, front-ground and background, stupid and occasionally surprisingly intelligent, in-your-face and even subtle, blatant and surreal jokes. More than one scene invites a press of the replay button, either to be sure that you really just saw what you saw or to catch any number of throw-away jokes in the background. 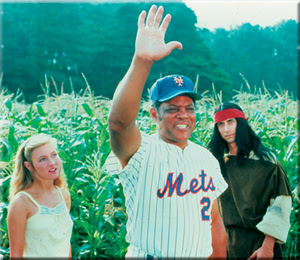 When Nature Calls makes excessive and intentionally obvious use of stock material (thus Deep Throat in the background, for example), and its low budget is perhaps a bit too obvious, but in general it has an enjoyable vibe and does keep you laughing, far more so than many a bigger budgeted mainstream comedy. Like most Troma movies, When Nature Calls makes no undue attempts to present itself as anything more than what it is (poorly shot low budget trash), but for that it has a freedom and verve that is fun and enjoyable. Towards the end it does begin to lose its steam and, with the meta-parts about a possible sequel, it also overstays its welcome. Nevertheless, When Nature Calls remains an idiotically fun experience that unbelievably enough even invites repeat viewings — and thus it garners our recommendation, and not just for your next pot party. (Do people still even have pot parties?) 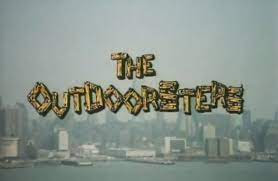 Robin Batteau and Steve Mandell sing the movie theme song –
The Outdoorsters (When Nature Calls):
Posted by Abraham at 1:17:00 PM