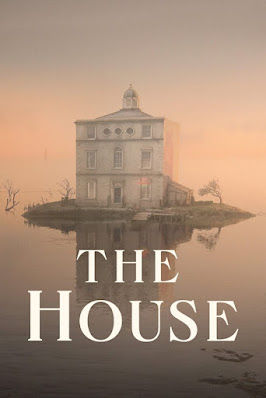 To say that The House is a captivating film is an understatement. An anthology film, The House is of course distantly related to the horror anthology films of yore that so many of us fondly remember, but it takes a thorough turn towards individuality and autonomy by being neither live-action nor pure horror. All three tales are told in stop-motion, and while the first two tales of the three do wade deeply into the genre of horror, they are far more surreally disquieting and bleak than truly terrific. As for the third segment, the closing one, its roots are more firmly entrenched in what could be seen as end-of-days science fiction, though ultimately it is divested of any bleakness due to a resolution that is not so much full of hope as it is of the possibility of, if not a future, then at least of continuance.
Trailer to
The House:
The title of the movie reveals the underlying thread that ties the three stories together, a house, within which the three tales transpire, with the segments themselves seemingly set, chronologically, in the past, present, and future. The tales one and all were written by Irish playwright Enda Walsh, and display in general such narrative creativity and nuanced understanding of the diverse characters of different genders and age that we, in all truth, were surprised to learn that Enda Walsh is a guy. (Take that as a compliment, Enda.) In turn, the individual segments, despite sharing the stop-motion technique and managing to maintain a visually continuous overall look, are all animated and directed by different people — all of whom are obviously talented in their field. 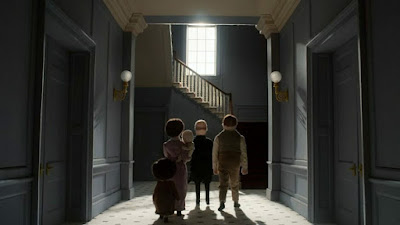 The first tale, entitled And heard within, a lie is spun, was directed by Emma de Swaef & Marc James Roels, who seem to have some renown amongst fans of contemporary stop motion due to their own short anthology film This Magnificent Cake! (2018 / trailer). Set, we would imagine, not fully two centuries ago, the tale is one of a father (Matthew Goode) of an impoverished family that learns the hard way that a gift that is too good to be true is indeed exactly that. Given the chance to exchange his lowly home for a grand mansion designed and finished by "an architect of great renown" whom he meets one dark night in the midst of the woods, he jumps for the offer. As his young daughter (Mia Goth of A Cure for Wellness [2017 / trailer]) & Marrowbone [2017 / trailer]) watches with incomprehension, her parents are literally seduced by the house, which, like the Winchester House once was, seems to be in perpetual construction. The bleak and dryly humorous tale of grotesque horror resolves itself as consequentially as it does surreally and bleakly, and while the ending may not be as dark as it could have been, it ends more open than with any promise. The quality of the segment is of such superiority, be it the execution or slowly increasing sense of dread or the consequentiality of the nightmare-like narrative, that one is initially hard-pressed to believe that the remaining segments can hold a candle to it — but they do. 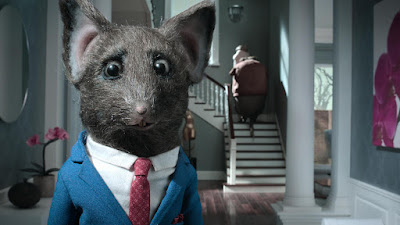 Segment two is directed by Niki Lindroth von Bahr, an award-winning director of stop-motion shorts featuring human-like animals, a penchant that she transfers into her segment. Set in what could well be today, Then lost is truth that can't be won follows an anthropomorphic rat, the fretful and cash-strapped developer (Jarvis Cocker of The Fantastic Mr Fox [2009 / trailer]), who has tasked himself to renovate and flip the now centrally located urban money-pit even as he attempts, via smartphone, to maintain a relationship with what appears to be an estranged significant other. The horror in this tale is less traditional and initially tends towards the more mundane: the mounting desperation as one thing after the other goes wrong, and financial and personal ruin hangs heavy in the air like an ever-larger-growing Sword of Damocles. Here the distressed man-rat is ultimately seduced by the promise held in the simple phrase, "We are extremely interested in the house." Despite the bright lights of contemporary urbanity, and an almost Bugsy Berkeley-like musical number, the surreal resolution is hardly a positive one, and unlike the first holds anything but promise. 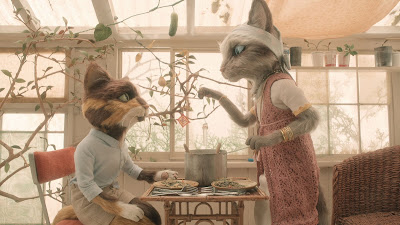 For that, the third and final segment, Listen again and seek the sun, directed by Paloma Baeza, ends with a ray of hope, physically and symbolically, that the situation of the setting should hardly be able to promise. In what appears to be the future, in a time when the climate has gone haywire, the house now stands alone amidst a continually rising lake of water. The cat landlord Rosa (Susan Wokoma) is obsessed with fixing up her rundown property, and is hampered by the lack of the financial input that her non-rent-paying lodgers Elias (Will Sharpe of Black Pond [2011 / trailer]) and Jen (Helena Bonham Carter of Dark Shadows [2012 / trailer], The Lone Ranger [2013 / trailer] and so much more) should be supplying. The three seems more like a dysfunctional family than a landlord-lodgers triad, but the arrival of Cosmos (Paul Kaye of Anna and the Apocalypse [2017 / trailer], Malice in Wonderland [2009 / trailer], The Toll [2021 / trailer] and more), a mystical shaman-like friend of Jen, skews the already precarious balance in the house, a house in which one person chooses to continually ignore her obviously doomed situation and the other two are perhaps possibly finally ready to move on. While quirky and somewhat laden with a sense invertible loss, this segment remains the happiest of the three, ending on a note that indicates that at least sometimes even the most doomed of situations might still have a future available, if you are only able to find it.

The House is an idiosyncratic treat, a masterfully executed collection of finely tuned tales that seesaw, successfully, between grotesque and tragic, dread and joy, humor and horror. Technically, the execution is excellent, making the movie a true feast for the eye. Likewise, the narratives are engrossing and hardly predictable, with every episode making the viewer hungry for more. Ultimately, the only flaw with the movie is that after the third segment, The House ends.
Jarvis Cocker's title track,
This House:
Posted by Abraham at 10:20:00 AM