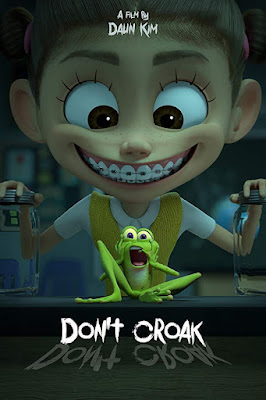 Here's a nastily funny little film we stumbled upon while wasting time on YouTube, one of many fine shorts there by [former] students of Ringling College of Art & Design. This one here is by Daun Kim. She entered the school in 2015, after a year of studying engineering elsewhere, which caused her to do some soul-searching and come to the realization that she wanted to be "a part of the animation industry, and not just a fan of it" [VoyageLA].
Don't Croak was her thesis film, and it went on to win Best Animation Series at the College Television Awards 2020.
Daun Kim has since relocated to California, where both her LinkedIn page and her imdb entry indicates that she is very much part of the industry that she so loves. Don't Croak is short and, as a rather droll but trenchant illustration of how life sometimes just doesn't give you a break, is less sweet than sour. Enjoy the Short Film of the Month for February 2021 —
Daun Kim's
Don't Croak:
Posted by Abraham at 8:19:00 PM