Voyage to the Prehistoric Planet (USA, 1965) 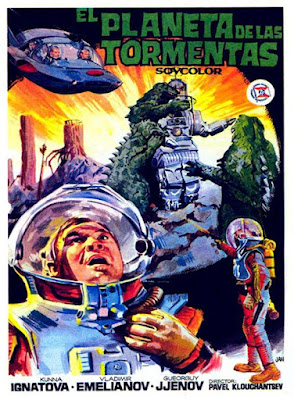 "The year: 2020. The moon has been explored and colonized and the next space goal is about to be reached – the first landing by man on the planet Venus. Scientists profoundly hope that life, similar to that on Earth, may be found on this planet where so many physical conditions are like our own. Three rocket ships of an international expedition – the Sirius, Vega and Capella, after having successfully traveled 200 million miles are in the final stages of their journey..." 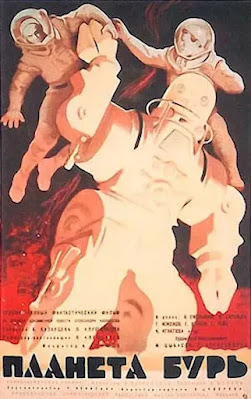 Fan-made Trailer to
Voyage to the Prehistoric Planet:
Well, when it comes to Venus having "so many physical conditions are like our own", global warming hasn't gotten that far yet, though it surely shall. Dunno when the fact that Venus is hot and barren became general knowledge, but this flick sticks to the There's-Life-On-Venus motif that previously led to such fine (?) pulp fiction like Edgar Rice Burrough's anemic Carson Napier of Venus series. 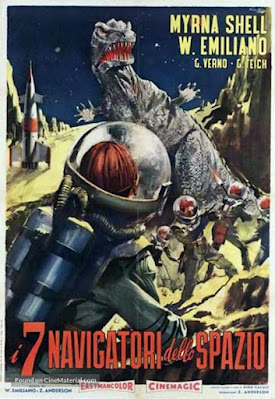 Voyage to the Prehistoric Planet enjoys some minor infamy and cult appreciation for what it is: a bottom of the barrel Roger Corman-produced repackaging of a Russian film featuring new scenes with a slumming Basil Rathbone (13 June 1892 – 21 July 1967) and semi-slumming Faith Domergue* (16 June 1924 or 1925 – 4 April 1999). Although some claim that the original 1962 Russian film, Planeta Bur (or "Планета Бурь") is a good film — Re: Rockets from Russia: great Eastern Bloc science-fiction films — our guess is that while it might work better as a whole, the original film is probably just as turgid. 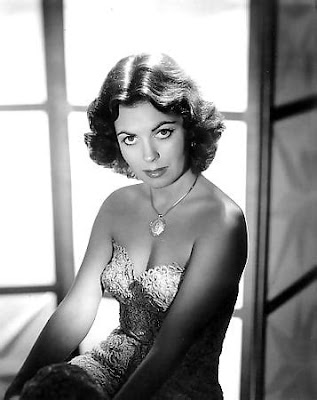 * Ms. Domergue — above, not from this film — a Howard Hughes "discovery" at Sweet 15, is probably best remembered today as a Howard Hughes discovery (a relationship she cast light upon in her 1972 bio My Life with Howard Hughes) or as a scream queen with some notable B-films to her name. The difficulties of the production Vendetta (1950 / not the Italian poster below), the film that Hughes made to make her name, are legendary, but neither that flop nor Where Danger Lives (1950 / trailer) made her an A-star. Those of us from the days of local Creature Feature shows remember her from B classics like This Island Earth (1955 / trailer), It Came from Beneath the Sea (1955, see: Ray Harryhausen), Cult of the Cobra (1955 / trailer) and The Atomic Man (1955 / trailer). The end of her "illustrious" career included Eurotrash like Lucio Fulci's One on Top of the Other a.k.a. Perversion Story (1969 / trailer) and Alberto De Martino's The Man with Icy Eyes (1971 / music) as well as simple states-side trash like Blood Legacy (1971 / trailer), Psycho Sisters (1974 / trailer) and The House of Seven Corpses (1974 / trailer). 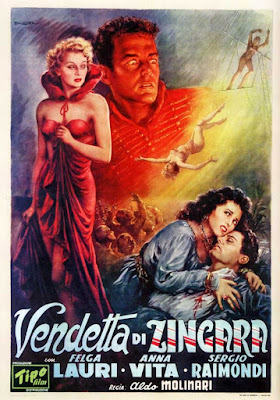 For this Roger Corman release, which never even hit the theatres but went straight to television, Corman pulled in the young filmmaker Curtis Harrington** (17 Sept 1926 – 6 May 2007) — his only previous feature credit then being the idiosyncratic Night Tide (1961 / full film) — to reshoot some scenes with the previously mentioned West Bloc "stars". Rathbone, along with the sets he appears on and the clothing he wears, was pulled over from Harrington's other concurrent Corman-produced re-cut of a Russian film, Queen of Blood (1966 / trailer). This film here, however, was possibly the deepest point in Rathbone's career until 1967's Hillbillys in a Haunted House (trailer), which is arguably at least a bit more psychotronically fun than Voyage to the Prehistoric Planet. 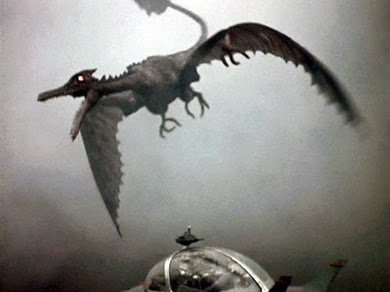 ** Harrington came from an art-film background, as can still be noticed in Night Tide, and went on to do a variety of oddly entertaining feature films, including Whoever Slew Auntie Roo? (1971 / trailer / co-written by Jimmy Sangster), What's the Matter with Helen? (1971 / trailer / with Yvette Vickers), The Killing Kind (1973 / trailer) and the original (as in not credited to Allan Smithee) version of Ruby (1977 / trailer), as well as some "classic" TV horror films, How Awful about Allen (1970 / full film), Killer Bees (1974 / full film) and Devil Dog: The Hound of Hell (1978 / trailer / with R.G. Armstrong). 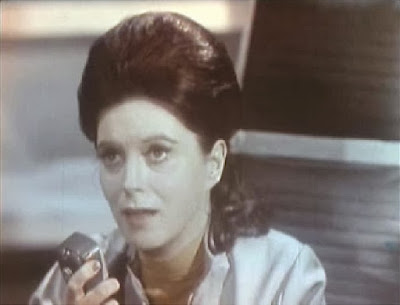 As for Faith Domergue, one can only assume the paycheck was good because even for her career her shot-in-half-a-day scenes in Voyage to the Prehistoric Planet are a notable deep point, as is her general appearance in the movie: her extremely uncomplimentary hairstyle, which looks much more like a motorcycle helmet than hair, pretty much negates any possibility of recognizing her once-smoldering beauty. Harrington, in any event, was so proud of his work on this film that his film credit is "Written and Directed by John Sebastian". (The ever-popular "Alan Smithee" only gained use in 1969 with Death of a Gunfighter [trailer].) 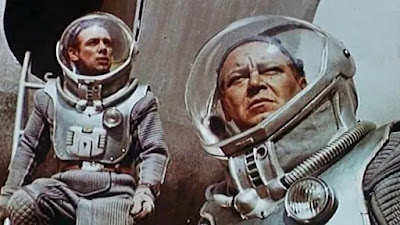 But to get to the film, which supposedly more or less follows the exact plotline of the original Soviet version, but with Faith Domergue's character "Marsha" replacing Kyunna Ignatova's "Masha" and the addition of Rathbone's phoned-in Prof. Hartman. 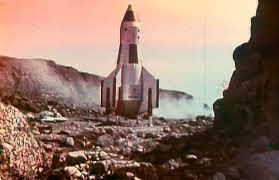 Set last year, in 2020, Voyage to the Prehistoric Planet starts off with three spaceships named, respectively, the Niña Vega, Pinta Sirius and Santa Maria Catella having arrived at Venus, whereupon the Catella is promptly destroyed by a rogue meteor, putting serious dents in the planned mission. (The amount of emotion Prof. Hartman expresses upon hearing that a ship has exploded is hilarious; most people show more emotion when someone burps.) Plans rearranged, two cosmonauts and their robot John go to Venus and, when it comes out that their landing was less than successful and they are now stranded, three more men go down to the surface to find and save their colleagues. The only female onboard, Marsha, orbits the planet in the Sirus, present as a character merely to prove that women are flighty and emotional and to add some "will she or won't she" non-tension regarding disobeying orders and also going to the planet — the film is not at all subtle about its women-are-inferior attitude. 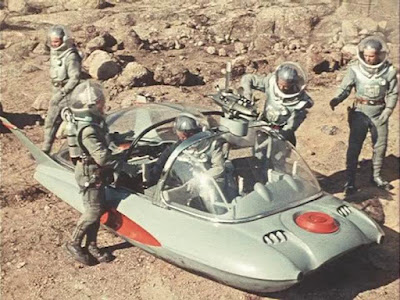 What transpires on the planet, all which is from the original Soviet film, is actually rather intriguing, if slow and dated and occasionally really, really cheesy. The rubber-suited alligator men are hilarious, if not oddly familiar — Star Trek: Arena (scene) anyone? — while the man-eating plant with long tendrils would look at home in an Ultraman (1966 / original intro) episode. 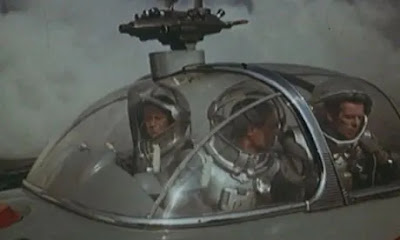 The true stars of the film are the cosmonauts' flashy hover-car, a retro-beauty of dated futurism in which we would definitely be proud to cruise Hollywood Blvd (or any blvd., for that matter), and the robot John. The best scene in the entire movie (next to the quick cut of him flexing his steel toenails) involves him carrying two cosmonauts through a river of molten lava: his self-preservation program suddenly kicks in, so he decides he has to lighten his load. 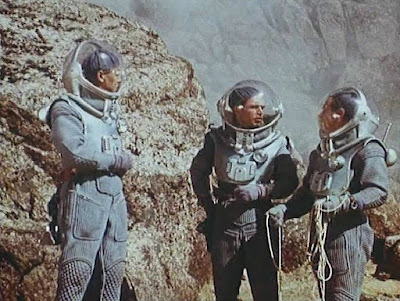 Unluckily, his fate in Voyage to the Prehistoric Planet pretty much ensured that the planned version of The Forbidden Love of Robbie the Robot and John never got made, thus robbing the world of what surely would have been a groundbreaking gay classic. The final scene is also nicely ironic: the rocket takes off and flies away seconds too early to make what would truly be a momentous discovery. 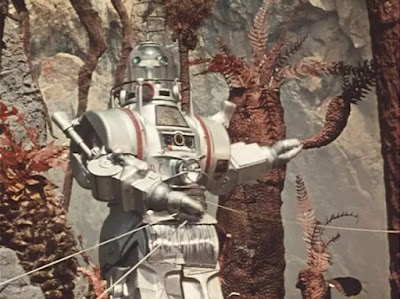 On the whole, however, Voyage to the Prehistoric Planet is tacky and turgid and extremely dated. The dubbing is atrocious, the acting ranging from stolid to somnambulant to passable to terrible. We were never actually fans of MST3K, but we cannot help but feel that had MST3K tackled this baby here, their version would have been an improvement. Definitely not required viewing. 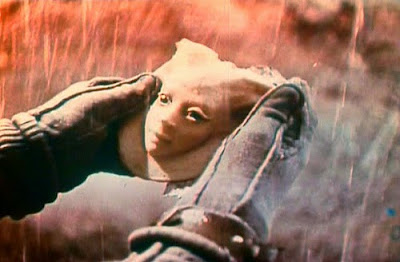 BTW: Three years later, in 1968, Roger Corman, ever out for the buck, hired Peter Bogdanovich to re-use the Planeta Bur footage yet again. Bogdanovich's "film", Voyage to the Planet of Prehistoric Women, is actually the more entertaining version of the Planeta Bur regurgitations, if only for the pulchritude of the prehistoric women, which includes the pneumatic Mamie Van Doren (of The Girl in Black Stockings [1957]), Bogdanovich's then-wife Mary Marr, Del Tenney's wife Margot Hartman (15 Aug 1933 – 11 Apr 2020), and diverse unknowns.
Scenes from
Voyage to the Planet of Prehistoric Women:
Posted by Abraham at 3:30:00 PM