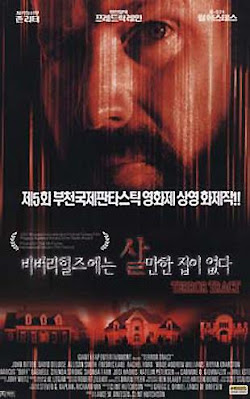 An anthology film set in upper middle-class suburban America, involving a real estate agent (John Ritter [17 Sept 1948 – 11 Sept 2003] of Bride of Chucky [1998], Stay Tuned  [1992 / trailer], Americathon [1979 / trailer], The Other  [1972 / trailer] and I Woke Up Early the Day I Died [1998 / trailer]) who, while showing houses to a young newlywed couple, Alan (David DeLuise) and Mary Doyle (Allison Smith  of Jason Goes to Hell: The Final Friday [1993 / trailer]), reveals the secret story of each abode. (The Law, in CA: "[A]ny death on a property [peaceful or otherwise] needs to be disclosed if it occurred within the last three years. The seller must also disclose any known death in the home if the buyer asks. [realtor.com]") The result is three tales of mild EC-like terror and an entertaining wrap-around segment that is, in the end, the best and funniest segment of the movie. All segments were written by Clint Hutchison, who later wrote and directed The Conjurer (2008 / trailer) but seems to have since left the biz; the directorial chores for Terror Tract, however, he shared with Lance W. Dreesen, who went on to do the cheesy werewolf tale Big Bad Wolf (2006 / trailer) and some Christian propaganda flick.
Trailer to
Terror Tract:
For some inexplicable reason, Terror Tract won a variety of genre film festival awards, including Best Feature at the 2002 Shriekfest and the Audience Award at the 2001 Award Brussels International Festival of Fantasy Film (BIFFF). "Inexplicable" not because the anthology film is all that terrible, but because it really isn't all that special. It is a passably entertaining, if flawed, evening's distraction, but the three core stories are as predictable as day and night. 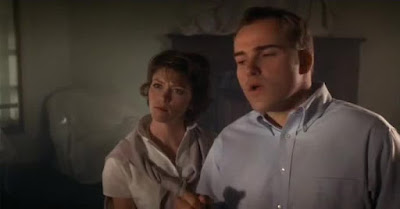 As mentioned, the wrap-around sequence is lots of fun: the film starts with an ironic progression of scenes, from earthworm to the scene in an automobile's rear-view mirror, and closes with a wild ride of escape from suburban hell which, combined, come across a bit as if they were directed by a David Lynch with a sense of humor. Had the three main stories within displayed half as much wit, Terror Tract would truly be noteworthy as a black comedy. 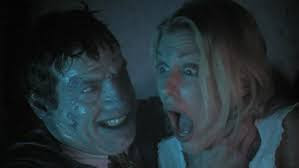 The last and best main segment, Come to Granny, is likewise effective enough, even if it does suffer, much like the other two preceding main segments, Nightmare and Bobo, from an excess of predictability. Unlike those two episodes, however, the characters of Come to Granny at least all react believably to their respective situations and the main women, Dr. Helen Corey (Brenda Strong of Starship Troopers [1997 / trailer]) and eye-candy girlfriend Jasmine (Shonda Farr of A Couple of Days and Nights [2005 / trailer] and Jack Frost 2: Revenge of the Mutant Killer Snowman [2000 / trailer]) manage to infuse their respective characters with a bit more realistic personality than the almost generic female characters (namely, cheating wife and loving wife) of the other two episodes. The narrative concerns a young man, Sean Goodwin (Will Estes of May [2002 / trailer] and Magic Valley [2011 / trailer]) who wakes up one day to discover he has some sort of mysterious link to the bloodthirsty Granny Killer that allows him to see the maniac's next murder before it happens. He seeks out a psychiatrist, Dr. Corey, for help, but she begins to suspect that he himself might actually be the killer... 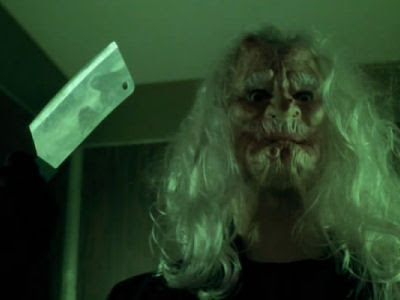 While Come to Granny does manage to establish a certain level of tension and unease, Nightmare and Bobo, the preceding segments, do not. And while the segments in general might display a dash of humor here and there, and even a certain amount of horror, neither shines. 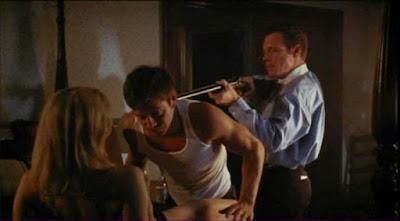 The worst of all segments is undoubtedly the first, Nightmare, wherein a cheating trophy wife (Rachel York) and her stud muffin (Carmine Giovinazzo) are caught by her sadistic husband (Fredric Lehne of Man's Best Friend [1993 / trailer]) and, in the process of barely managing to save their own lives, kill him. She swoons and has nightmares while stud muffin disposes of the body, unluckily with some sorely needed car keys. Two or three nightmares (of the return of the waterlogged, undead husband) later, the predictable end ensues, lightly spiced with indications that maybe the hubby returned after all. The tale works well all the way up until the husband is dead, after which the brainlessness of the two survivors makes you want to see them dead. The preference to dispose of the body instead of taking advantage of the amount of evidence within the bedroom that would prove that the cheating lovers were caught in a kill or be killed situation reveals a stupidity that is echoed again and again in all their actions throughout the rest of the segment, a segment that is most memorable for the insufferable performance of Rachel York as the weak-willed, milquetoast trophy wife who in no way would ever be capable of maintaining a mask of innocence and ignorance even if she hadn't been hung out to dry in the final scene. 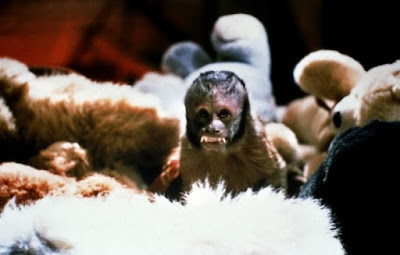 Bobo almost manages to charm its way into the viewers heart simply because of the presence of a then still relatively unknown actor named Bryan Cranston (of Drive [2011 / trailer], Isle of Dogs [2018 / trailer] and Dead Space [1991 / film]). The plot is basically Bryan Cranstan (or, to be exact, his character, lawyer Ron Gatley) verses a homicidal monkey. About the only things that were unexpected in the narrative are his decisions: 1) not to share the news that the monkey killed the dog with his one-note-character of a loving wife Carol (Jodi Harris), and 2) to bury the body of the seriously over-killed animal catcher (Marcus "Buff" Bagwell of Day of the Warrior [1996 / trailer], L.E.T.H.A.L. Ladies: Return to Savage Beach [1998 / trailer] and 4:Go [2017 / trailer]) — Ron obviously did not believe in his own capabilities as a lawyer. The tale is tragic but predictable to the end, and not helped any by the shrill performance of the bratty daughter Jennifer (Rye of Cahoots [2001 / traihttps://www.youtube.com/watch?v=53FrDqoyPecler]). 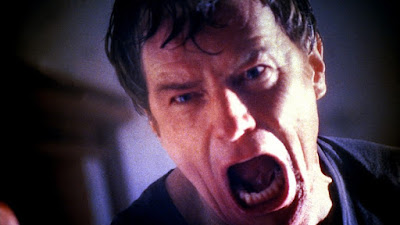 One cannot fault the direction, as both directors display a clear understanding of how to structure a shot and keep the visuals interesting. Likewise, but for the previously mentioned exceptions, most of the acting is pretty good. (Indeed, even characters with as little presence as Loving Wife Carol are at least natural and not "acting".) The biggest flaw is simply that the stories themselves never truly shine, and it is hard to truly get involved with a tale in which the ending is foreseeable from the start. The soundtrack is also a bit schizo: Terror Tract opens and closes with an overly orchestrated, bombastic score that feels immensely out of place, but luckily the music becomes less overt and in your face during the movie itself. 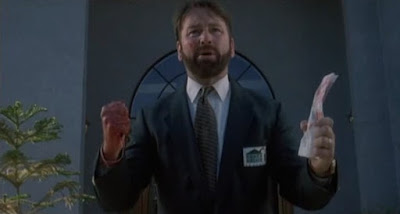 So, is Terror Tract worth watching? Well, the first segment, Nightmare, definitely isn't, while the wraparound definitely is. The remaining two segments, though flawed, are entertaining enough that one's time does not seem wasted. So, sure, give it a go if you don't have to pay for it. Otherwise, perhaps you would do better to seek out some past, better anthology classic that you have yet to see. There are, after all, so many of them out there. 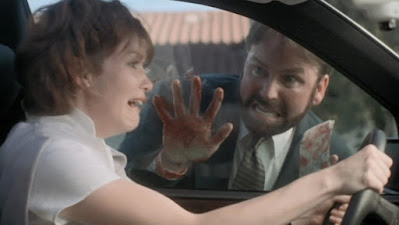