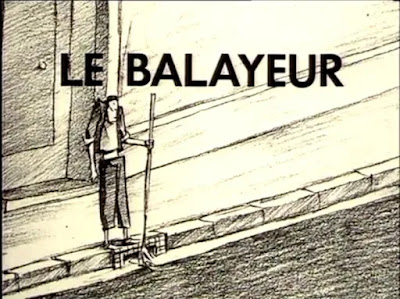 Thank you, boing boing, for leading us to a forgotten animated short from the past: the first short film of the Frenchman Serge Elissalde (born 30 July 1962 in Besançon, Doubs, France). The English title is generally The Streetsweeper.
The plot, as supplied at imdb: "A crotchety streetsweeper keeps his street clear of dirt and dust, and of people and cars. He pushes them down a drain hole along with the trash. Then, a small child appeals to him when her ball rolls down her drain. He goes to work, fishing out all that he's shoved in, in search of the ball. But success with helping someone brings new problems."
Serge Elissalde's
Le Balayeur:
Like Slow Bob in the Lower Dimensions (USA, 1991), our Short Film of the Month for August 2012, Le Balayeur was screened long ago on MTV's Liquid Television. If you know/knew that show, "Then you probably also remember when MTV was good — which almost makes you one old fart, to say the least. But for those of you who don't know what Liquid Television was, it was an 'animation showcase' that appeared regularly on MTV (and BBC 2) in the 1990s that featured all sorts of fun original 'alternative' cartoons and short films, some of which — Beavis and Butt-head and Æon Flux, for example — went on to spawn their own series and/or movies."
Le Balayeur was a one shot, Serge Elissalde was not; he has gone onto a successful career in film and is still kicking around...
Enjoy his short, and try not to lets the questionable visual depiction of the streetsweeper himself turn you off. The short is a product of a time when even someone like the great Grace Jones saw nothing wrong with a music video like the one to Slave to the Rhythm, which was cut primarily from previously released commercials.
Grace Jones –
Slave to the Rhythm:
Posted by Abraham at 11:21:00 AM