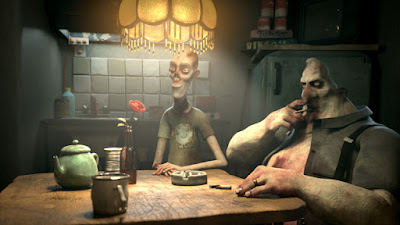 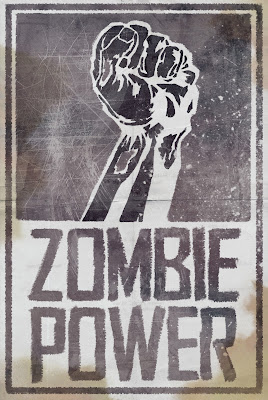 Poster above taken from the Less than Human tumblr.
The Imdb has a relatively cut-and-dry and not 100%-on-the-mark plot description: "A freelance reporter [voiced by Scott Keck] ventures into a post-zombie resettlement camp and interviews two ex-zombies [Dave Dyson = Andy, and Lawrence Marvit = Don] trying to find out whether ex-zombies are ready for reinsertion into normal society." The two tragic figures of this wryly humorous tale are very much still undead, if each with a consciousness that includes memories from their lives as humans. Within its short running time, Less than Human takes a look at friendship, prejudice and tolerance, and the nature of being human. It also tackles the concept of the failed impartiality of press coverage — as we see it, the reporter must come from FOX News.
Less than Human, like our June 2013 Short Film of the Month Backwater Gospel (2011), is a student bachelor's project at Denmark's The Animation Workshop. 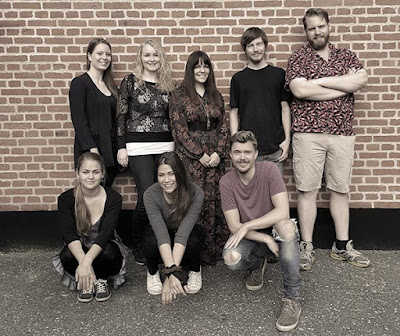 To take the some info (like the photo above) straight from the short's website: Steffen Bang Lindholm (the director) initially pitched the idea in the spring of 2015, bringing together an end team of eight students — four animators and four computer graphic artists — not one of whom was named Hans Christian. (The names, no particular order: Ditte Marie Ludvigsen, Lasse Steinbeck, Matilde Soeltoft, Anna Eckhoff Ohrt Nissen, Julie Rebecca Billeskov Astrup, Morten Vestbjerg Boegelund Lassen and Ida Marie Soendergaard). That's them above in the photo. The film was made over 10 months, from late August 2015 to early June 2016.
Posted by Abraham at 3:06:00 PM