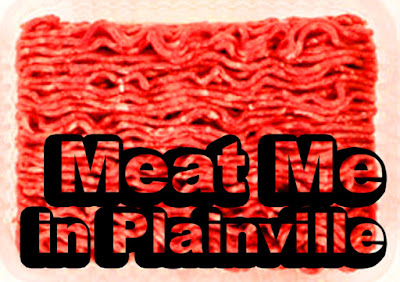 Meat Me in Plainville from Greth Productions on Vimeo.
OK, here a low budget film that could possibly be described as a black comedy were the ending, well, not so black. We found it on io9, where they explain "[writers & directors] Greg Hanson and Casey Regan channel an older B-movie aesthetic for their short horror film Meat Me in Plainville. After all the livestock in America die off, cannibalism becomes legal with unexpected consequences. Despite being apparently set in the 'future' year 1994, Meat Me in Plainville debuted in 2012 at the Puchon International Fantastic Film Festival.* It takes its conceit and turns it into something akin to a zombie movie where anyone could be a flesh-craving monster."
OK, so let's place the film in an alternative reality where, well, the government can't be trusted. (Wait! Isn't that our reality, too?)
The acting is variable, the story effective and well thought-out, the ending an open and bleak downer. We liked it, and so will you. Enjoy.
* Puchon aka Bucheon — it's in Korea (South).
Posted by Abraham at 5:20:00 PM