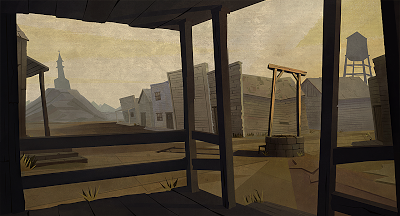 Some dude named Bo Mathorne, one of a group of eight for whom this short was a bachelor project at the Danish Animation Workshop, directed this finely made Western horror. (The Animation Workshop, an animation school located in Viborg, Denmark, has been a never-ending source of exceptional animated shorts since the late 1980s.) Kudos go to all eight — their names (aside from Bo), according to the film blogspot: Esben Jacob Sloth, Rie Nymand, Tue Toft Sørensen, Martin Holm-Grevy, Mads Simonsen, Arthur Gil Larsen and Thomas Grønlund — for producing this unbelievably enthralling computer animated film, a perfect example of a truly sublime amalgamation of content and style.
Bigotry and fear meld to turn a town full of normal religious Joes and Jills into a maelstrom of hate-filled and self-righteous killers, as brainless as any zombies you might confront in a world gone mad. Who are the real monsters here — the undertaker, coming to do his job? The blind and brainless town folk, who let ignorance and religion sanctify their literal monstrous conversion and acts? Or the man of cloth who twists the supposed words of god into a screed of unbridled malevolence?
Hypocrisy and hate fill the screen in this oddly beautiful yet ugly and gory horror short, a film that uses our natural fear of death, our willingness to cast blame and our tendency to follow blindly as the driving forces leading to a terrible and destructive climax.
Though set in a time long past, the events narrated reflect those that still occur today all over the world...
Posted by Abraham at 11:30:00 AM