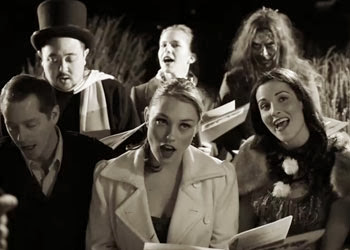 Yes, 'tis the season to be jolly, so don we now our gay apparel and let us consider the Man whom this Joyous Holiday does honor. And no, we don't mean that hirsute fat guy in red whom you've never met but who has nevertheless managed to steal the undying love of your pre-pubescent children; we're talking about that Other Guy, the one born on this [upcoming] Christmas Day who grew up to be an unwashed, long-haired hippie and, eventually, rose from the dead to become the world's first zombie. You know: The Man...
As it says in the uncensored 1 Corinthians of the New Testament, "[...] Christ died for our sins according to the Scriptures, that he was buried, that he was raised on the third day according to the Scriptures, and that he did go forth and eat brains, and it was good [...]." And it is in His honor that we now so wallow in capitalistic splendor and culinary gluttony each winter, and it is in His honor that we here at A Wasted Life have once again chosen a Christmas-themed short as our Short Film of the Month for December 2013. And like last year, we present it now, in the first week of December, so that yes, you, Virginia, can have the next 20-odd jolly days to contemplate the real meaning of Christmas and Coca Cola — and all that which the World's First Zombie has wrought. 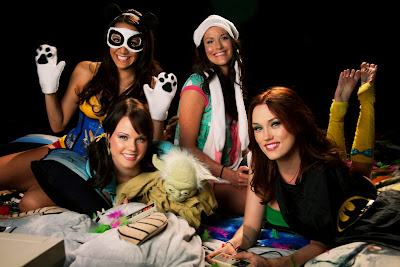 Directed by Sean Becker and written by Zeb Wells, A Very Zombie Holiday is TV/Internet production of Team Unicorn, a multi-media production group we had never heard of before we stumbled upon this short... but that we now wish we were married to (all of them — why not?). The original members were the four main sexy babes that appear in this short, Rileah Vanderbilt (of Hatchet [2006 / trailer]), Michele Boyd (of Cheerleader Massacre 2 [2011 / trailer]), Milynn Sarley (of Street Fighter High: The Musical [2010 / trailer]) and Clare Grant (of The Graves [2009 / trailer]). Talented, good-looking women, one and all, and this short instructional video is proof of it
Hairy Christmas to you all — and to all, a Zombie Night!