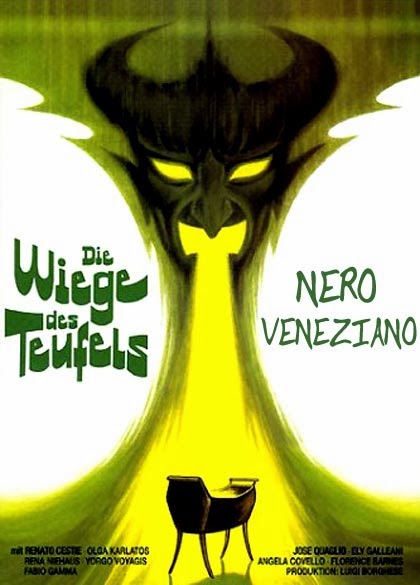 A fan-made tribute to Damned in Venice:


Hard to believe that such a dull film can be so enthralling... 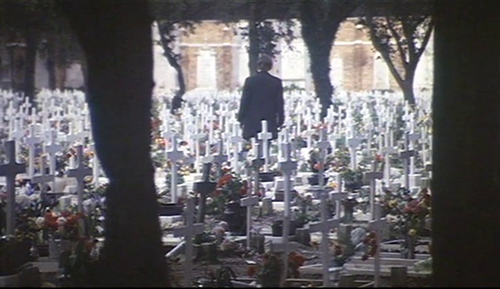 Aka Die Wiege des Teufels and Venetian Black, Damned in Venice is the second movie we've seen from 1972 that presents one of the most beautiful cities in the world, Venice, in a less than glamorous or even attractive light. Like Also Lado's giallo The Child (1972), which shares an actor with this film (José Quaglio, here as the duplicitous Father Stefani), this leisurely paced, dank and moody horror film shows Venice as a grey city in decline, rich in atmosphere but decaying and oppressive, almost empty of people — a far cry from today, when even in the rainy off season, which is when we like to go, the city is still so full of tourists that every restaurant still feels no reason to cook a decent meal as all tables will always be filled anyways. Now, like then, the perfect location for the Son of Satan to come onto the world... 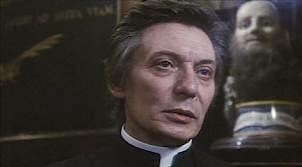 In the last of his directorial efforts, Ugo Liberatore, who has always been more active as a screenwriter (among others, he co-wrote The Mill of the Stone Women [1960 / trailer] and The Hellbenders [1967 / trailer]), presents a narratively flawed and somewhat diffuse and almost alienating if ultimately interesting and memorable horror story that most of the few who have ever seen tend to dismiss as an Italo take on Rosemray's Baby (1968 / trailer). To simply dismiss Damned in Venice as such does disservice to this overlooked and mostly forgotten movie, for it is related to Rosemary's Baby only in as much as that it, too, is about the Son of Satan being born unto this earth; other than that, and perhaps the concept of a mother's overriding love for her child, Liberatore's movie owes little to everyone's favorite Polanski flick — and shows a lot more naked nubile flesh, to boot, not to mention blood and gucky stuff. 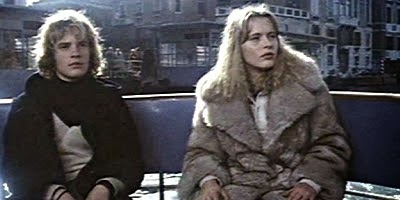 Mark has a vision:


The plot involves the two orphans, the blind Mark (former Italo child "star" Renato Cestiè, also seen in Torso [1973 / trailer] and A Bay of Blood [1971 / trailer]) and his bitchy, semi-frigid virgin older sister Christine (former German nubile Rena Niehaus of Arabella l'angelo nero [1989 / What is eurotrash?] and Wilde Früchte [1977 / trailer]), who live with their less-than-loving Granny (Bettine Milne of House of Clocks [1989 / trailer]). Mark is plagued by frightful visions of a mysterious man and woman, and when one such vision inadvertently results in the incineration of Granny, the disharmonious siblings go to live with their sickly Aunt and Uncle Martin (Tom Felleghy of Black Emanuelle in Afrika [1978 / soundtrack], Seven Dead in the Cat's Eye [1973] and much, much more) in their squalid, run down and shuttered canal-front hotel. (A hotel in Venice that can't get guests? A canal-front hotel that fails? My, Venice was different in the 70s.) Before long, Christine is running a "hotel" populated by numerous attentive nubile who accept cash and, soon after, the man in Mark's visions, Dan (Yorgo Voyagis of Nosferatu in Venedig [1988 / trailer], Die Washing Machine [1993 / trailer], Delicatessen [1991 / trailer] and City of Lost Children [1995 / trailer]), shows up and Christine, who insists she is still a virgin, suddenly has a bun in the oven... 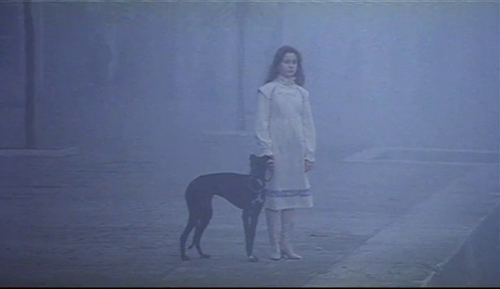 Heavy on symbolism, Damned in Venice is not as weird as it is strange, and is as equally discombobulating as it is dramaturgically confused and slow. Thus, it is also a hard film to recommend, particular to anyone who has a distaste for leisurely pacing and arty pretensions. One of our favorite arty spleens of the director is his use of the beautiful actress Olga Karlatos, who played Prince's mom in Purple Rain (1984 / the crappy song) and is familiar to most (if anyone) for the wood-impaled eye scene of Zombie (1979 / trailer)  — though she can also be seen in such semi-classics as Murder Rock (1984 / German trailer), Once Upon A Time In America (1984 / trailer) and Keoma (1976 / trailer) — in four different small roles of varying importance (as the woman in Mark's visions, his Aunt Madeleine, Vicky's mother, and the Midwife on the ferry), thus symbolizing just how fully evil is pulling the strings.* 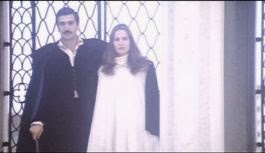 That Mark, his blindness and helplessness a literal symbol for the fruitlessness and hopelessness of his attempts to prevent fate, doesn't notice is perhaps understandable, but that no one else does — or perhaps chooses not to — is almost funny. Are we all so blind to evil? In the end, everyone in Damned in Venice, whether good, evil or simply indifferent, whether voluntarily or involuntarily, is, like Mark, doomed to be a pawn of Satan. (Yep, if there is one lesson to be learned from this movie, it is "Trust no one"... or, maybe, "Evil always prevails" — two things currently emphasized and confirmed and personified by the NSA.) 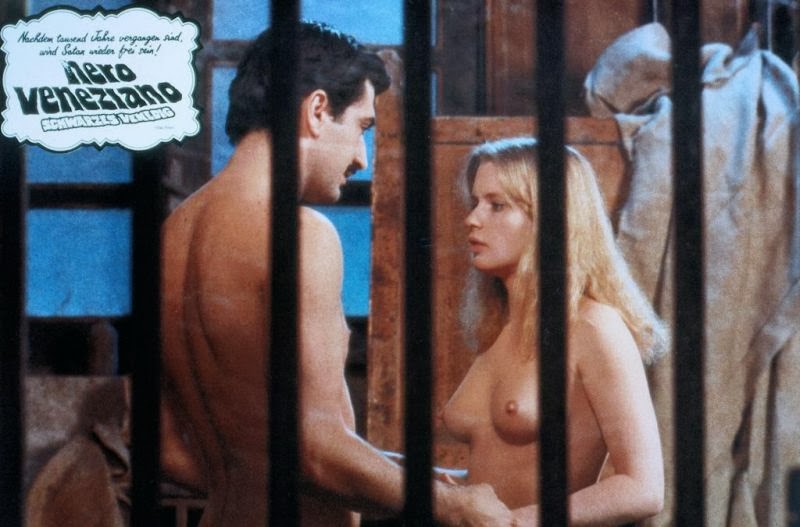 In regards to acting, it is always a bit difficult to make judgment on an Italo film simply because the dubbing is always a minus (and dubbed this film is indeed, with its cast of Italians, Germans and Greeks), but in general everyone succeeds even where the makeup does not. One does often wonder, however, why the filmmakers didn't give blind Mark blind eyes like, say, those of Emily (Cinzia Monreale) in The Beyond (1981 / trailer). To the detriment of the movie, not only do his eyes simply look like eyes that can see, but more than once (or twice or thrice) his eyes obviously see when they shouldn't; had he been given blind contacts, the overall impression of both his blindness and his later regaining of sight would've been emphasized by this small detail. 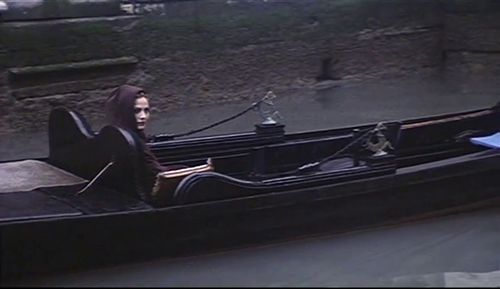 Damned in Venice is overflowing with "scary" or "gross" or "decadent" events that don't really tie together but combine to create an oddly dreamy, almost narcotic mood in a Venice that, but for a singular fire scene aboard a water taxi, is unnaturally empty... but unnatural is the overall impression of this oddly distant supernatural thriller about the possible arrival of Satan's son — though for much of the movie one is never really sure if it isn't just that Mark is just delusional. 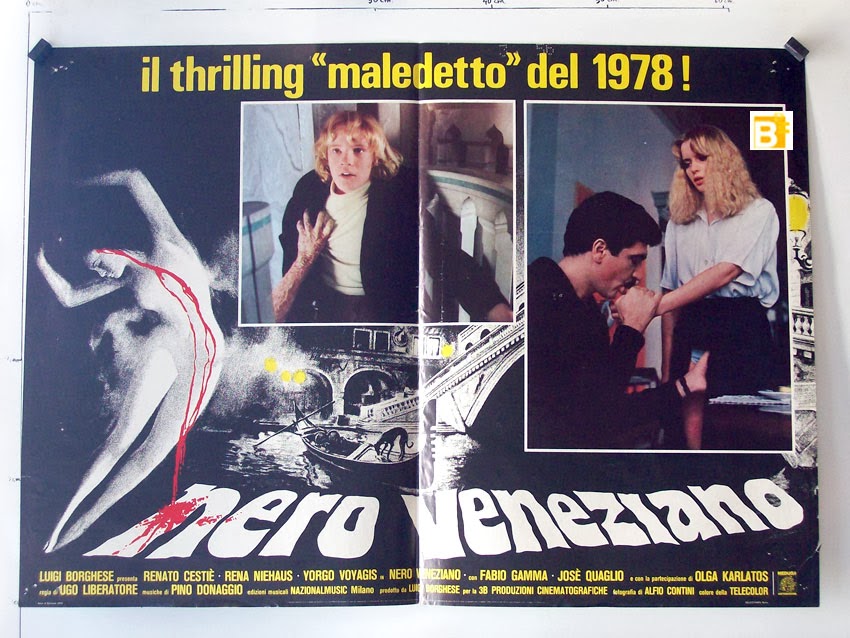 Overlooked and unknown, the film might not be everyone's cup of tea, but fans of oddly aloof and inconclusive horror films liberally sugared with scenes that are as half-normal or abnormal as they are played fully normal (Giogio's fuck scene while Mark is there, a well full of rats and snakes, all conversations with Father  Stefani [José Quaglio of — aside from The Child (1972) — Malastrana (1971 / trailer), L'occhio dietro la parete (1977 / soundtrack) and Gualtiero Jacopetti's Mondo Candido (1975 / Italian trailer)] that are played out in his private chambers) should find the film well worth watching. And even those who find the film a bore will probably still spit their beer at the movie's one major shock moment. 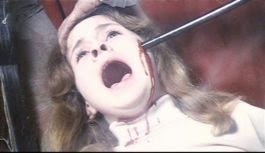 The threat-laden soundtrack by Pino Donaggio:

* We liked the Last Supper, too, but felt it wasn't really sleazy enough... 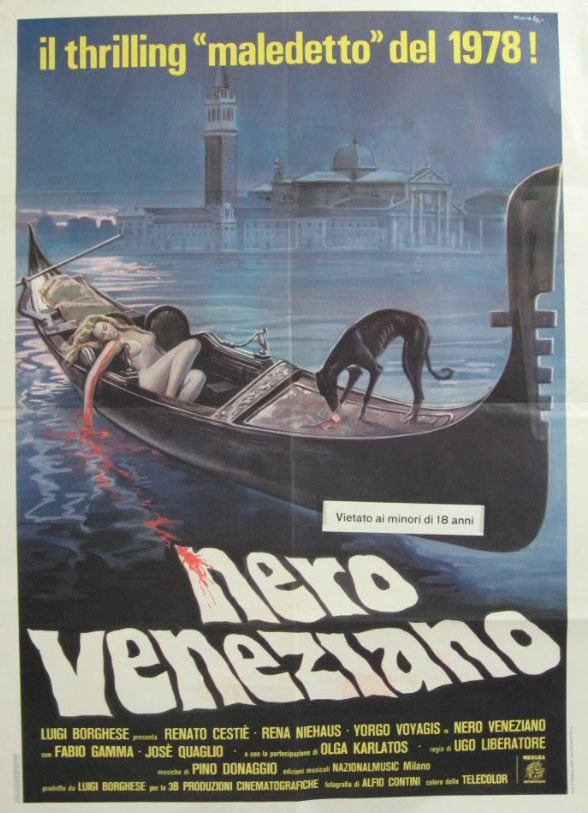