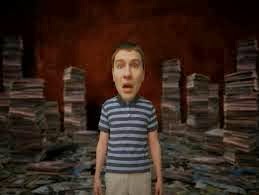 "A boy succumbs to the evils of perversion."

This month's short is from some dude named Adam Rosenberg. We first stumbled upon this little cute little gem some time ago while perusing that eternally entertaining black hole of ephemera, the Internet Archives, where it resides in the rubric Prelinger Archive Mashups. (Like the Short Film of the Month of April 2011, Helping Johnny Remember, The Pervert reuses material from the Prelinger Archives.) Since that day some months ago we have found The Pervert elsewhere, and as it has always given us a little giggle whenever we saw it, we figured it is time to share the short but giggle-inducing film with the readers of A Wasted Life. ("What readers?" one might ask, but that is a different story...)
To quote imdb, "Adam Rosenberg is a director and actor, known for Manny (2009)" — and, indeed, though we never placed a name to the short, we caught Manny (full short) — image below — long before The Pervert, but forgot it relatively quickly 'cause though it is a highly disturbing short, it is simply a bit too Jan Švankmajer for us to fully go gaga over. 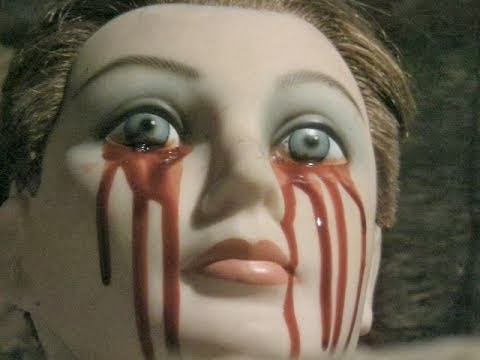 In any event, we could find little info on The Pervert, and only slightly more on Rosenberg. So, while we were unable to find out when exactly the short was made, we were able to find out that Adam Rosenberg is partial to "backflips, potty humor, and General Tso's chicken". Rosenberg calls himself "an award-winning filmmaker and video editor"; according to his CV, which you can find online at his website, he is a Magne Cum Laude BFA graduate (3.9 GPA!) of the Virginia Commonwealth University Dept of Kinetic Imaging, 2011 and, going by his short film Adam Rosenberg: A Self Portrait, he wears ugly underwear. His CV doesn't say whether or not his is single, but if so, The Pervert would indicate that he is probably one for the ladies. As for what he looks like: he plays the doomed lad in his short film seen at the top of the page here. 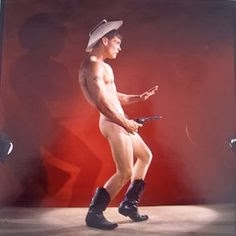 The Pervert initially plays with the structure of the good ol' educational film before zooming off to... well, a great magazine collection, mildly nightmarish humor and an abrupt end featuring a cowboy. For The Pervert, Rosenberg appropriates a few minutes from one of the great pieces of anti-sex and anti-porn US propaganda, Perversion for Profit  (1965), which can be found in its full jaw-dropping idiocy and embarrassing length all over the web. As Wikipedia succinctly puts it, the propaganda "documentary" is "a vehement diatribe against pornography, the film argues that sexually explicit materials corrupt young viewers and readers, leading to acts of violence and 'perverted' attitudes regarding sex — including inclination toward homosexuality."
The "documentary" was a product of Citizens for Decent Literature (CDL), which, to quote Whitney Strub at Temple of Schlock, was "the pre-eminent anti-smut organization of the 1960s, nestled snugly between earlier Catholic pressure groups and later Christian Right ones. […] Founded by Cincinnati lawyer Charles Keating in the late 1950s, CDL amassed a rapid national following and exerted a powerful influence by the late Sixties, reaching its peak when President Richard Nixon appointed Keating to the President's Commission on Obscenity and Pornography. Later Keating let CDL languish as he shifted his interests toward junk bonds in the 1980s, contributing to our current era of disaster capitalism during the Savings & Loan catastrophes of the Reagan era. Apparently sexual decency meant more to him than the financial sort." Perversion for Profit, one of the most popular downloads at the Internet Archives, is extremely popular for mash-ups. 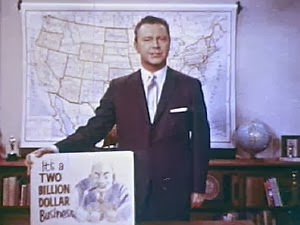 The host of Perversion for Profit, and thus the introductory host of Adam Rosenberg's The Pervert, is the 6'2" former Los Angeles-based  news reporter and talk show host George Putnam (14 July 1914 – 12 September 2008). A conservative Democrat (and good argument of the shortcomings of a two-party system), Putnam did go on record in the 80s that he no longer thought "the homosexual" a pervert but rather born that way, but in Perversion for Profit — and the sequences in The Pervert — he palpably conveys the feeling that the whole of the US should best wear a chastity belt and blinders. You can visit his star on the Hollywood Walk of Fame at 6372 Hollywood Blvd or, if you keep your eyes open, catch his brief appearance (always as a reporter) in the movies Fourteen Hours (1951 / trailer), I Want to Live! (1958 / trailer), Helter Skelter (1976 / trailer) and — gag — Independence Day (1996 / trailer).
The short: