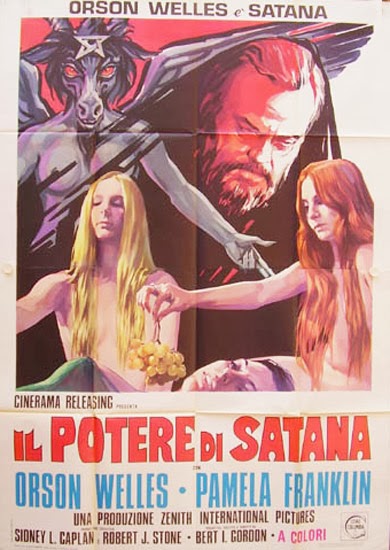 Bert I. Gordon is one of the great heroes of low budget schlock and treasured guilty pleasures, mostly from the third quarter of the 20th century. Director, writer, producer, auteur, the man is still alive but hasn't made a film since his 1990 horror film Satan's Princess (1990 / full movie); a fact that might have changed by the time you read this, as although it has hardly received the fanfare the news perhaps deserves, the good man is currently making his first film in over 25 years, the thriller Secrets of a Psychopath, due out in 2014 and starring a typically (for him) career-stalled, genre-laden name, Kari Wuhrer (of Thinner [1996] and Anaconda [1997]). One can only hope that that film is more akin to his classic trash — Beginning of the End (1957 / trailer), with its classic scene of a dumb man screaming silently; The Amazing Colossal Man (1957 / trailer), with its memorable hypodermic-needle harpooning scene; Attack of the Puppet People (1958 / trailer); War of the Colossal Beast (1958 / trailer); the teen-heavy Tarantula (1955 / trailer) spin Earth vs. the Spider (1958 / trailer) ; the fun, unjustly maligned and overlooked ghost story Tormented (1960 trailer / full movie); the nasty thriller The Mad Bomber (1973 / trailer); and the undeniably horrible but hilariously entertaining duet The Food of the Gods (1976 / trailer) and Empire of the Ants (1977 / trailer) — and less like his duds, Picture Mommy Dead (1966 / German trailer), Burned at the Stake (1981) and all his comedies (though, in truth, How to Succeed with Sex [1970] is of note for being such an unfunny comedy that is funny in its unfunniness and really deserves to be seen just to even learn how funny unfunny can be). 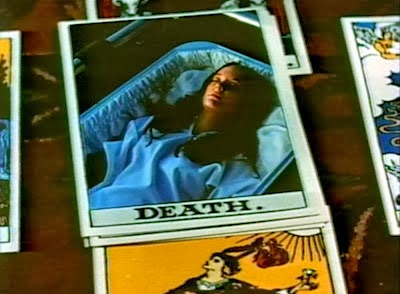 Necromancy, aka The Witching, Rosemary's Disciples and Horror Attack, we are sad to say, is not one of Gordon's better films, either in terms of being fun and trashy or serious and scary (not that one ever really expects the latter from a Gordon film). Of all the titles the film has had, Rosemary's Disciples is perhaps the most apt, for the core narrative thread is stolen directly from Polanski's much more successful Rosemary's Baby (1968 / trailer): hubby Frank Brandon (Michael Ontkean) falls in with coven of devil worshippers and trades off his wife Lori Brandon (Pamela Franklin) for... a hedonistic lifestyle and a good job in a toy factory!? 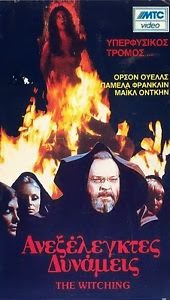 Michael Ontkean sells 7-Up:
Instead of having the events based around an apartment building full of witches, however, the events are moved to the difficult-to-reach, small, rural town located somewhere in California called Lilith. (Here alone, the astute already know something is rotten in the state of Denmark, as the town is named after Adam's first wife Lilith, the world's first feminist who smartly chose to leave the Garden of Eden for her own personal freedom away from the domineering Adam.) Unlike in Rosemary's Baby, however, our endangered heroine — who just had a miscarriage back in the big city — should not give birth to the devil's baby, but rather give up her life so that the dead son of the town's patriarch Mr. Cato (a slumming Orson Welles) can return to life... 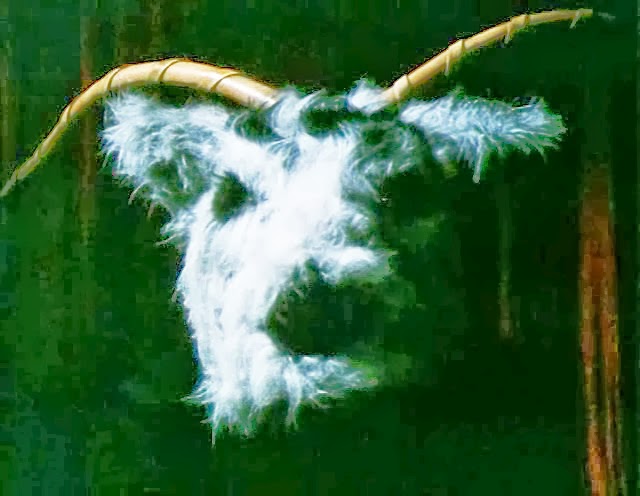 The version we put in our DVD player was the re-release version from 1983, The Witching / Horror Attack, which is graced with an entirely new opening scene of a Black Mass featuring a lot of male and female frontal nudity from people that appear nowhere else in the movie as well as an Orson Welles stand-in wearing a goat's head so as to hide the fact it's a different actor. The scene is neither needed or in any way horrific, but as we here at A Wasted Life do like pointless nude scenes we tend to see the added scene as perhaps the best one in the whole confused and mostly incomprehensible movie. 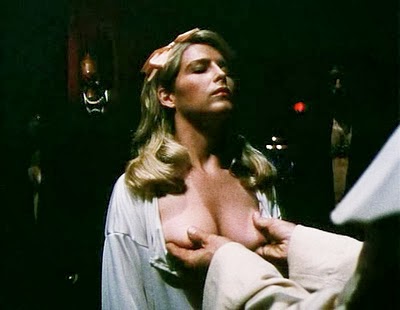 But the fact that The Witching is a new, re-cut version makes it a bit hard to place the blame of the movie's total failure upon Bert I. Gordon, as aside from the added nudity, the confusing ghostly female (Anne Gaybis of Wham! Bam! Thank You, Spaceman! [1975 / trailer]) spouting inane tirades to our heroine is also a new addition. In any event, we find it doubtful that the original version, Necromancy, could have been all that much better than the re-release, especially since the terrible one-note performances of Pamela Franklin and Michael Ontkean are so typical of the performances found in most Gordon films. (OK, Michael Ontkean, whom most people know as Sheriff Harry S Truman from the classic TV series Twin Peaks [1990-1991], was always better looking than he was good at acting, but Pamela Franklin proved her stuff at a variety of ages in a number of memorable films, including The Innocents [1961 / trailer], The Nanny [1965 / trailer], And Soon the Darkness [1970 / trailer], and The Legend of Hell House [1973 / trailer].) The best acting of the movie, aside from Orson Welles' obvious walk on non-performance, is that of the actor playing Dr. Jay, Harvey Jason, who looks like and conveys the hedonistic quality of a refugee from the Golden Age of Porn, the perfect quality needed for a person that has given himself over to the total hedonistic abandonment the coven members practice and enjoy. (An interesting tidbit of trivia: he and Pamela Franklin met for the first time on the set of this movie and are still happily married today.) 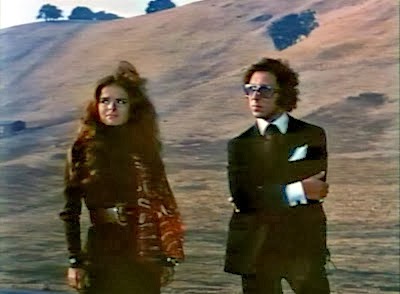 Overly talky and expository, The Witching is nevertheless often messy and incomprehensible. But for all the bad acting and dialogue and loose plotting and pointlessly arty cinematography and editing, it is the dislikably whiney and overly helpless heroine, Lori (Franklin), which becomes the most annoying aspect of the movie. Indeed, she does more damage to the flick than all the other flaws combined: forever ignoring the facts she is confronted with — including both dead bodies and honest town folk that don't hide their religious affiliations — and refusing to flee from the imminent danger, Lori literally whines her way to her fate. Had Lori only been given a brain and at least a little mettle, The Witching might have at least achieved some character identification and, through that, some effectiveness as a lightly arty exercise of third-rate, mildly moody horror. An understandable and sympathetic heroine would also have given the depressing ending a lot more punch, because the viewer might have still at least cared... 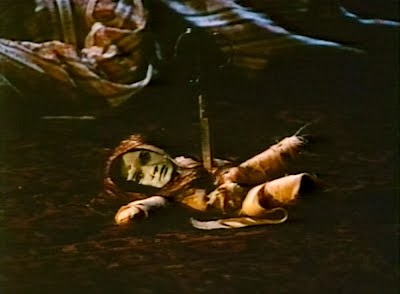 Necromancy, aka The Witching, Rosemary's Disciples and Horror Attack, is a dud of a horror movie that is not scary, interesting nor funny. Not imperative viewing. 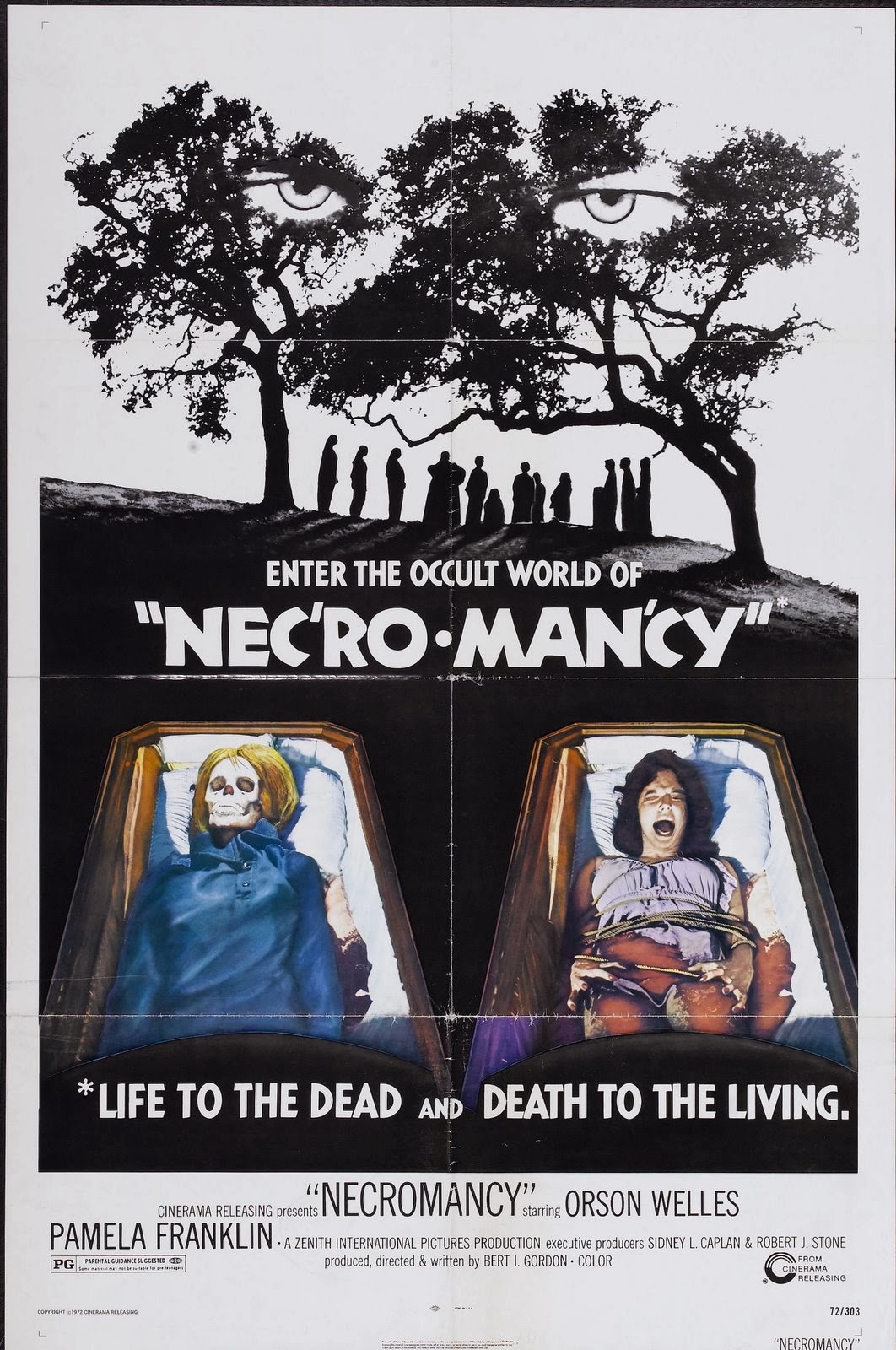