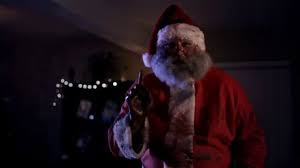 T'is the season, again. Time to pretend you believe in brotherly love and you're not actually just simply bowing down in blind worship to the all-pervading gods that are excessive capitalism and pointless consumerism.
This year's season-appropriate short is from a talented lass who lives in La-La Land named Ama Lea who goes by the pronouns "she/her" and about whom we know and found little. She's on vimeo and twitter and Instagram and LinkedIn and designs clothes, and she has been making short films for years — she even did contributions to the short anthologies ABCs of Death 2.5 (2016 / trailer / segment "M is for Mermaid") and Deathcember (2019 / trailer / segment "Five Deaths in Blood Red"). She does not do wimpy stuff, either. This fun little film is a good example of the envelopes she pushes: kids die, too. Brutally. One with cookies.
Ama Leas sold her entire vinyl collection to make her Slay Bells short, and we are happy she did so, for her short is an enjoyable little dash of holiday body-count gore about a Santa who really doesn't give a shit whether you've been naughty or nice: he just wants to have some holiday fun!
Slay Bells:
The film lacks credits other than those of writer and director Ama Lea, and we were unable to locate a release date, but online sources say RA Mihailoff, David Foy and RH Stavis are featured players (in a cast of, we thinks, nine). David Foy is found somewhere in Hatchet II (2010 / trailer) and Victor Crowley (2017 / trailer); RA Mihailoff is also found in the former film and, most notably, plays Leatherface in Leatherface: Texas Chainsaw Massacre III (1990, see: R.I.P. Tobe Hooper, Part II), and "celebrity" exorcist RH Stavis looks pretty hot in a corset. Enjoy.
And as an extra: more holiday cheer
thanks to John Denver!
For further Christmas fun,
check out these other season-themed
Short Films of the Month:
Dec 2020: Elvira's Very Scary X-Mas (USA, 2010)
Dec 2019: Oh Christmas Tree (USA)
Dec 2018: Beauty of Horror – Christmas Claymation (USA, 2018)
Dec 2017: Winter Stalker (USA, 2010)
Dec 2016: Santa (Greece, 2013)
Dec 2015: The Living Want Me Dead (USA, 2010)
Dec 2014: Father Christmas (Canada, 2011)
Dec 2013: A Very Zombie Holiday (2010)
Dec 2012: Treevenge (2008)
Dec 2010: X-Mess Detritus
Posted by Abraham at 9:01:00 AM