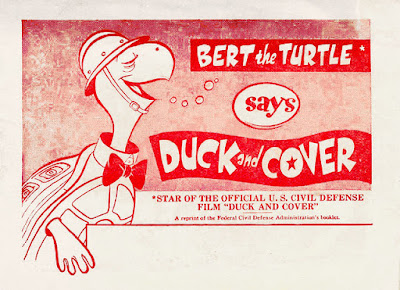 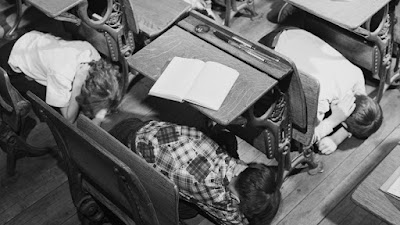 Really: we have probably all heard of this thing, but how many (especially those born after 1970) have actually seen this classic, "1952 civil defense animated live-action social guidance film"? In 1999, Duck and Cover received the honor of being inducted into the US National Film Registry, which describes the film thus: "This landmark civil defense film was seen by millions of schoolchildren in the 1950s. As explained by Bert the Turtle, to survive an atomic attack you must 'duck and cover.'" A description that totally ignores the film's most attractive aspect today: it's pretty funny. 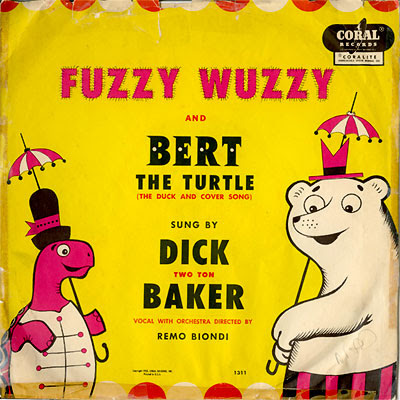 But before we look at the film, let's take a gander at the catchy title track, entitled Bert the Turtle (Duck and Cover) written by Leon Carr and Leo Corday, and sung by the Chicago-based singer and entertainer Dick "Two Ton" Baker (2 May 1916 – 4 May 1975); in its day, it sold three million copies (though some sales may have been due to the 45's A-side song, Fuzzy Wuzzy [contemporary cover version]). Baker, a successful local musician in Chicago who once said, "The only thing I've ever wanted to do in this world is play piano and sing on the radio. This isn't work, it's play — and I'm getting paid for it!", released other popular novelty songs over the course of his career, including everyone's favorite, I Like Stinky Cheese. Oddly enough, however, Two Ton's version of Bert the Turtle (Duck and Cover), though obviously enough released* as a tie-in to the film, is actually a cover version. The original version heard in the film is sung by a typically generic easy listening chorus, by all accounts arranged by the jazz musician Dave Lambert (19 June 1917 – 3 Oct 1966) of Lambert, Hendricks & Ross.
* It was released by Coral Records, a subsidy of Decca whose roster included such great as Patsy Cline and Liberace. Coral ceased to exist in 1973.
Dick "Two Ton" Baker sings
Bert the Turtle (Duck and Cover):

The short itself was filmed somewhere in Queens in the autumn of 1951 by the Manhattan-based advertising firm Archer Productions. "The first public showing of Duck and Cover (and Our Cities Must Fight*) was at the Alert America Convoy launch in Washington, D.C. on January 7, 1952. The Alert America Convoy was the grand gesture of the new FCDA [Federal Civil Defense Administration]. The convoy comprised three caravans of 10 large trucks and trailers that toured the country for nine months in 1952. Each vehicle contained various civil defense exhibitions including dioramas, posters, three-dimensional models and movies. The theme of the convoy was to show what 'might happen' and then provide education on what every citizen could do to 'beat the bomb.' The Advertising Council, working closely with the FCDA, promoted the convoy like a Hollywood B-movie with screaming posters that read: 'Don't miss it…it's the show that could save your life!' [Conerad]"
* Like Duck and Cover, Our Cities Must Fight was an Archer Productions production. 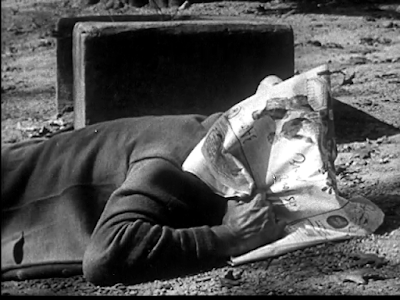 Obviously intended for a young audience, this "educational" film enjoyed a long life despite already being pulled from circulation by the contracting Federal Civil Defense Administration by June, 1955, and being officially declared "obsolete" by the same administration in 1957. (For more info on all that, see Jake Hughes's essay at the National Film Registry.) But as every American knows: if a school ever bought an educational film, it was shown until it fell apart, so this short continued to be screened for years to come. Thus the film was indelibly burned into the brains of generations of kids and, once it was truly no longer shown in schools, it achieved a second life as pop reference material perfect for such fun stuff as the documentary The Atomic Café (1982), a 2013 National Film Registry induction, or Weird Al Yankovic's Christmas at Ground Zero (1986)
Full short —
Duck & Cover:
Like most educational and/or civil defense films, the cast is a cast of nobodies. Perhaps some went on to this or that level of fame and success in business or crime, but as the names are unknown we will never know. One name is known, however: that of the narrator. Duck and Cover is one of the first known film projects of the deceased and mostly forgotten American character actor Robert Middleton (born Samuel G. Messer, 13 May 1911 – 14 June 1977), who went on to have a decent career usually playing the bad guy. 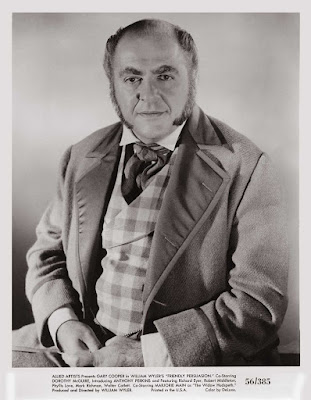 Aside from his numerous TV appearances, he can be found in such fine feature-film fare as Paul Newman's film debut The Silver Chalice (1954 / trailer), the classic noir The Big Combo (1955 / full film), The Desperate Hours (1955 / trailer), Elvis Presley's film debut Love Me Tender (1956 / trailer), The Glass Cage (1964 / full film), Nancy Sinatra's film debut For Those Who Think Young (1964 / trailer), Which Way to the Front? (1970, see Dick Miller, Part III), The Harrad Experiment (1973 / trailer), and the anti-classic The Lincoln Conspiracy (1977 / full film).
As an added attraction —
Billy Chambers' 1962 non-hit, Fallout Shelter*:
* "Fallout Shelter, which was recorded in two or three takes along with the ironically titled A-side of the disk (That's When I Stopped Living), was sung by 24-year-old Billy Chambers and a chorus of back-up singers from Florida Southern College. Chambers, who was in a rock band called the Dynamics, was recruited for the session because [producer & writer Bobby] Braddock liked the singer's voice. This record would remain the only solo music issued by Chambers, who left show business shortly after the single's release for the more stable field of construction. Chambers passed away in 1991 at the age of 52 from cancer. [Conerad]"