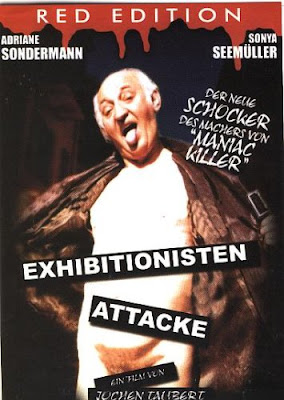 Another obscure direct-to-video slab of independently made, unmitigated trash from Germany's premiere Outsider filmmaker, Jochen Taubert (born 14 Jan 1968), whose films anyone outside of the German-speaking countries will probably never bother to see, unless of course they are bad-film masochists who happen understand some German and go the extra mile to search them out. In general, we would recommend trash-lovers to watch at least one of Taubert's films someday (perhaps not this one), for we here at a wasted life find his socially irrelevant and intellectually empty examples of ugly, no budget, feature-length idiocy extremely enjoyable when watched in a group with the right state of mind and access to a lot of beer. But then, that is more or less also how Taubert's films are intended to be viewed, according to the filmmaker himself. "Back then [when we made our first film] like now, we always film under the influence of alcohol. It is also imperative not to be sober when watching our films. [ghostshit reviews]" 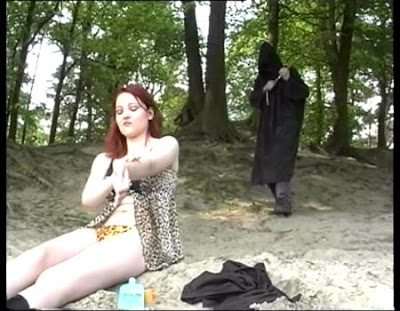 Exhibitionisten Attacke ("Attack of the Exhibitionists") is possibly/probably his fourth full-length project, made a year after his similar but superior — if one can even use that word when discussing Taubert movies — Ich pisse auf deinen Kadaver ("I Piss on Your Cadaver"). The "plot" this time around involves a mad ninja doctor who turns his mostly male patients into murdering exhibitionists, although only three or so ever truly go the full monty and flash full frontals with out-of-focus, pube-crowned hooded soldiers (hairlessness wasn't really de rigueur yet in 2000), and a young woman singer (Adriane Sondermann) out to stop him. Along the way, more or less everyone introduced on screen dies a bloody or ridiculous death. There is also one singular female exhibitionist, BTW, but she is somewhat demure by usual Taubert standards.
Exhibitionisten Attacke –
minus everything that YouTube might flag:
To talk logic is illogical when it comes to Exhibitionisten Attacke, but if there is any form of logic at all to the film's narrative it is at best dream logic, the kind of narrative development one has in dreams or nightmares: the action continues scene to scene, but no scene really lines up fully logically to the preceding or subsequent one despite coming across as chronological. The dialogue is just as non-sequiturly obtuse — typical example: after the lead female escapes death for the umpteenth time and has even killed an exhibitionist or four, she shows up at band rehearsal and simply excuses her late arrival with, "Sorry, I've had a hard day." Then she sings the crappy techno song (something about saving nature) as the film's only female exhibitionist attacker — at least: she dresses and kills like the other exhibitionists but she never flashes — saunters into the same studio and everyone in the room ignores her as she pours poison into the fog machine which, because that is what one does in a recording studio, gets turned on… 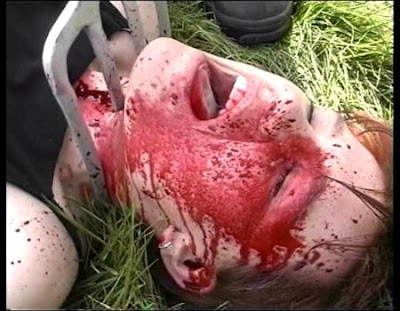 The lead female is the only survivor, of course, and thus narrative continues and everyone around her keeps dropping like flies, sometimes by her own hand. Despite an occasional emotionless outburst of "You asshole!" or "You fiend!" or "Help! There's a killer after me!", the film's heroine more or less just tumbles forward unaffected and unreflective by anything that happens to her. Regardless of whether her brother dies, friends die, her hairdresser dies, she hunts or is hunted by the bad guys, goes shopping for bandages, runs over a seeing-eye dog, or gets chased through the countryside, she remains pretty much nonplussed by the death and destruction around her and just barrels onward and forwards. In that sense, she is a bit like the title character of Christian Marquand's (15 Mar 1927 – 22 Nov 2000) star-studded flop of a filmic take of Terry Southern's Candy (1968 / trailer), with Babe of Yesteryear Eva Aulin, who as Candy just continues in a nonstop and unaffected forward trajectory no matter what sexual shenanigan transpires in her presence. (Again, however: instead of the sexual situations of Candy, in Exhibitionisten Attacke it is just death and blood and terrible acting). 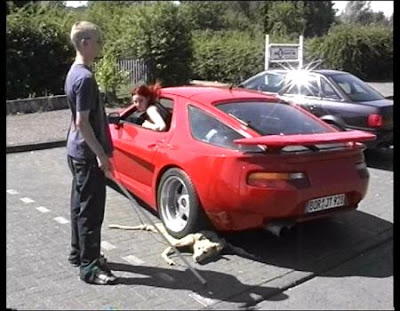 This consistency of inconsistency in dialogue and action and nonsensical forward trajectory of Taubert's movie is indubitably magnified by the fact that Exhibitionisten Attacke was made without a true pre-written screenplay. As Taubert reveals at ghostshit, "No, there is no script, there's a story as a guiding thread and what ends up happening is the result. For example: my friend is a policeman, so a police car shows up; my brother is in hospital, so we shoot at his bed in the hospital; and so forth…." 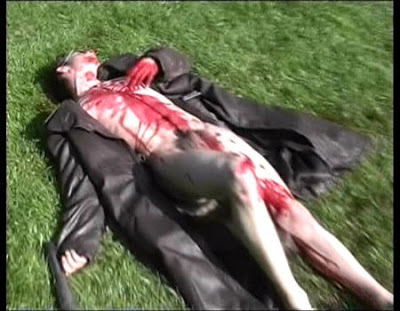 His brother also ends up being the first exhibitionist attacker, but that flasher isn't around all that long. In the case of Exhibitionisten Attacke, in any event, we would conjecture that true source of the film's creation is the footage of real internal operations that is intercut every time the mad doc is seen operating on one of his future exhibitionists. Taubert probably found it somewhere and knew he just had to use it, somehow, and then the bro in the hospital was just an unexpected extra. 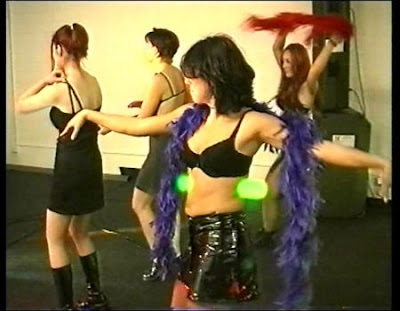 Regardless of the true sequence of inspirational events, the film would probably be "better" without the operation footage. It undeniably serves its purpose, which is to shock and repulse and push boundaries, but it also seems oddly unneeded and, unbelievably enough, clashes with the bloody but childish glee and general immaturity of the rest of the movie. In contrast, the old-man flasher showing his grey-domed skin-turtleneck is likewise an obvious attempt to shock and push borders, but it is puerile instead of nauseating and is at least as groan-inducingly funny as it is distasteful. (The Opa was far from a GILF, in any event.) The OP stuff does little but ruin the taste of one's beer and chips. 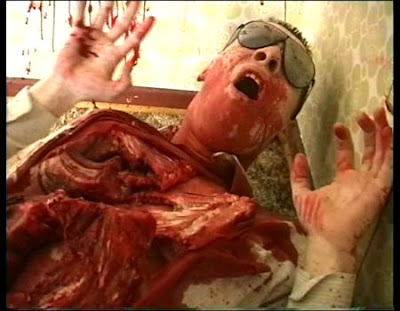 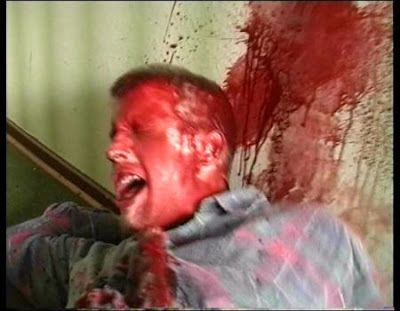 Had, however, more breast been seen in the movie, this singular scene might perhaps not come across as so forced, so un-fun, so pointless. (Indeed, Taubert forwent a major opportunity by not having the four women singing and dancing during the consciously interminably long opening credit scene do their laughably bad singing and dancing naked — indeed, it a shame that the well-orbed but thespian-challenged lead female never truly gets naked once. There are numerous scenes throughout the movie that would've lent themselves well for her to gratuitously get her dress ripped off.) 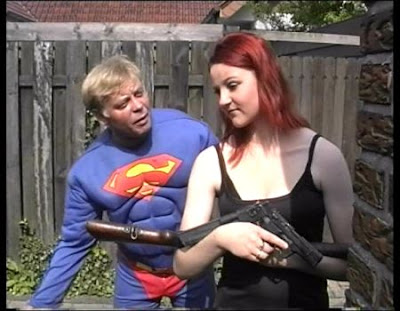 A true plus point of Exhibitionisten Attacke is that at roughly 1:40 hours in length, it mercifully and enjoyably short (unlike, for example, the painfully long Pundelmützen Rambos [2004]). Without the OP footage, the film would have been both shorter and more fun. But as the "independent and 'amatuuuure'" filmmaker Taubert himself points out, "The best thing about our films is that you can go to the toilet while the film is running and you don't miss anything." Our suggestion would be to use the OP-footage to take a pee, get a new beer, concentrate on rolling that joint or doing something similar, and to enjoy the rest of the movie for what it is: the apogee of filmmaking inability, and a visual and moving illustration of a total lack of anything remotely professional, be it the mildest capacity to tell a story, act, direct, do special effects or gore, anything. Enjoy!
Trailer to Taubert's most recent & professional film, Romeo & Julia, Liebe ist ein Schlachtfeld [Love Is a Battlefield]:
Posted by Abraham at 8:40:00 AM