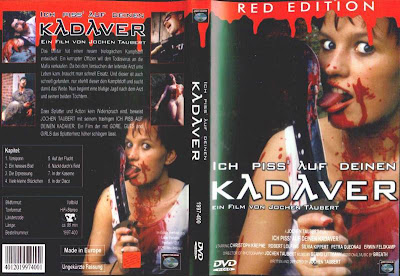 It is more than doubtful this film will ever see an English-language release, dubbed or subtitled, so perhaps an English-language review is pointless – but then, one could also argue that Jochen Taubert's films in general are pointless, and just like that doesn't stop Taubert from producing one unbelievably appalling film after the other, we won't let something like "pointlessless" stop us from writing about this film, Ich Piss' auf deinen Kadaver.

We would think that even those out there that don't understand German can decipher the film's title, but just in case your brain cells are a bit more fried than most, we'll supply a word-for-word translation: in English, this film, Taubert's third direct-to-video homemade "splatter" film, Ich Piss' auf deinen Kadaver, would be entitled "I Piss On Your Cadaver" – and indeed, by the end of the film, someone does piss on a guy's cadaver. Hardly all that shocking actually, in comparison to another, earlier scene in which the same guy pukes all over the face of a cadaver.

According to an oddly anal-retentive German website that keeps track of the bodycount of movies, Ich Piss' auf deinen Kadaver totals with "76 (+ an unknown number)." It would seem that they had problems keeping track, which is hardly surprising, for you would have to be one sick fuck to give this film the amount of attention needed to truly count the dead. This is not a film to pay attention to, it is a film to swill beer to while you gab with the guys, occasionally turning to the screen to shout and guffaw loudly at the next highpoint of ineptitude that is expectorated.

In all truth, we knew what we were getting into. Not all that long ago, we experienced one of Taubert's newer films, Zombie Reanimation (Germany, 2009), so we knew what to expect. But even then, we were still left slack-jawed in shock more than once that anyone would bother to make a full-length film like this one. The back cover of Ich Piss' auf deinen Kadaver proclaims (in German, of course) that it is "a film that Ed Wood would have truly enjoyed"; we would hazard to say that Ed Wood is a much better filmmaker than Taubert and that Wood might well have been insulted to have his name in any way brought into connection to this visual car wreck. That said, we also have to say that we ourselves loved Ich Piss' auf deinen Kadaver. True, it does evidence a total lack of talent across the board (as in directorial, thespian, narrative, filmic), but much like a ten school bus pile up on the highway with no survivors or a nudist camp inhabited by leprous geriatrics, it is grotesquely intriguing. But unlike leprous geriatrics and busloads of dead children, Ich Piss' auf deinen Kadaver is also laughable.

The plot involves a deadly virus invented by the military. A renegade soldier wants to sell it to the mafia, but it falls into the hands of a local doctor with two daughters (one of whom, Petra, spends most of the film naked). Around this basic premise is, well, one badly acted scene after the other of shootouts, chases, knifings, rape and castration, and blood and guts, none of which are in any way convincing. (Well, the puke scene looked pretty real.) The "actors" seem to be all friends and family of the filmmaker as well as other untalented people with no shame, and the budget obviously non-existent.

Continuity is there on occasion, logic never, and the film was edited with a blender, the cinematographer might well have been blind, and the script obviously written as the filming was being done. Yes, there is nothing to this film that in any way can be described as professional – and it is in this total lack of anything redeemable that Ich Piss' auf deinen Kadaver gains its redemption. This is truly pure, unapologetic trash, and thus it goes great with beer, weed and the guys.

Two clips of the film are embedded here. One features Bruno (the dog), who is perhaps the best actor in the whole film. In it, aside from the obvious lack of talent of all involved, you also get a general understanding of the "gore" and "splatter" of the film: the gore is a joke, and no matter where one is hacked or what body part is cut, the blood splatters all over the face. The other, longer clip far above, which features a variety of scenes from the movie, reveals the incredible pacing of the film, well exemplified by the scene in which the doctor impales an armed soldier (who never shoots or moves out of the way) with a slow-moving tractor. This type of temporal irreality occurs often in the film.

Another highpoint of Ich Piss' auf deinen Kadaver are the extended chase scenes in which the given girl actually runs faster than the car; neither gal gets away in the end, but the Jeeps never really overtake them. "Petra," who indeed has a tastily lithe body with pleasant orbs and a neatly trimmed bush, spends most of her scenes in undies or nude; her chase scenes are noteworthy not only for being done mostly as naked as god made her, but also for the fact that she really does – as they used to say – run like a girl: her arms swing so hilariously that they actually upstage her nakedness. (Taubert obviously liked the scene as well, because he uses it twice.)

In our review of Zombie Reanimation, we stated that Taubert's "film echoes the early anarchism of Troma's mindless flicks like Surf Nazis Must Die (1987 / trailer) or The Toxic Avenger (1984 / trailer), but with a way lower budget and far less professionalism." In all truth, Ich Piss' auf deinen Kadaver reveals that judgement to be an understatement, as this film literally makes the average Troma film look like a Spielberg production. We will surely never watch Ich Piss' auf deinen Kadaver again, but nevertheless, we give it a high recommendation. And we definitely plan to watch more Taubert films in the future...
(All images found at www.dvd-forum.at.)
Posted by Abraham at 12:15:00 PM